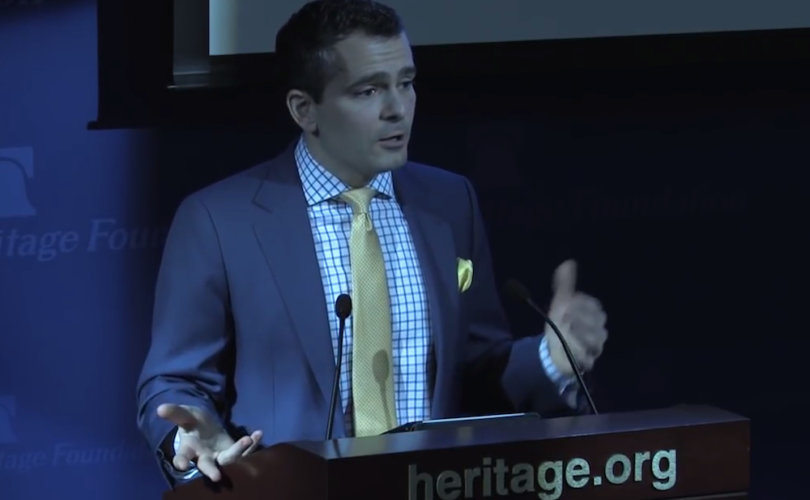 FEBRUARY 28, 2018 (LifeSiteNews) – In the fall of 2017, I was privileged to spend 10 days with Walt Heyer, a man who had undergone sex reassignment surgery and, after eight years of living as “Laura,” experienced regret and detransitioned, reverting to being himself – Walt – once and for all.

Walt and I were in Hong Kong to address a symposium at the University of Hong Kong concerning what is at stake regarding the twin cultural threats of transgenderism and same-sex marriage, now looming in the cosmopolitan – but still deeply rooted-in-tradition – city state.

During those 10 days, it seemed like every time Walt pulled his iPhone out of his pocket he had a new text or email from someone, somewhere in the world who had had second thoughts about “transitioning,” and was now desperately searching for help to undo the harm they had done to body and psyche.

In our politically correct world where pointing out the harms of “transitioning” is not only frowned upon but is increasingly a punishable offense, Walt is one of the precious, courageous few resources available to help counsel folks and guide them to the help they are looking for.

So why was Walt’s iPhone overflowing with anguished messages?

As Ryan Anderson points out in his just-released book, When Harry Became Sally; Responding to the Transgender Moment, most transgender people experience regret after taking steps to hormonally or surgically “transition.”

Beyond that, more than 40 percent – 40 percent – of those who identify as transgender will attempt suicide at some point in their lives. That’s a statistic you probably haven’t heard before, and with good reason: Progressives controlling mainstream media don’t want you to hear anything negative about transgenderism.

Transgenders are not the group of happy, smiling, newly minted guys or gals that the media would have you believe our transgender moment is producing. And that is precisely the point of Anderson’s book: He reveals the stark contrast between the cloying, sunny picture that transgender activists want you to see with the real picture, supported with an array of inconvenient scientific reports, statistics, and personal testimonies about transgenderism.

Most important, Anderson’s truth telling can help tens of thousands of men and women, boys and girls –– and their parents, swept up in the world’s current transgender moment, to avoid making choices that often lead to doing tragic, irreversible harm to body and soul.

From the first to last page of  When Harry Became Sally, Anderson chips away at the pro-transgender narrative that dominates headlines – and our thinking – today.

“The best biology, psychology, and philosophy all support an understanding of sex as a bodily reality, and of gender as a social manifestation of bodily sex,” says Anderson, adding, “Biology isn’t bigotry.”

Yet we are told we are “bigots” if we resist any aspect of transgender ideology.

In a nutshell, through the work of McHugh and Mayer, readers learn that the vast body of scientific evidence tells a different story from the one most of us hear repeatedly: Transgenderism is not a matter of genetics.

And while the terms “sexual identity” and “transgender” are so commonly used that they go unquestioned and are perceived to have been derived from biological or medical science, they are not. These terms are merely expressions of desire, behavior and self-acquired/expressed identity, all of which can be fluid and may change over time.

The only thing that science actually tells us is that we are born either male or female: undeniable, irrefutable biological and psychological truth. We are either men or women.

Perhaps the greatest harm inflicted by the promoters of transgenderism is on children who show signs of gender dysphoria. Parents are nowadays led to believe that the only way to prevent their gender-confused child from committing suicide is to allow them to begin to transition while they are young.

What parents aren’t being told is that 80 percent to 95 percent of children who express gender dysphoria will naturally grow out of it and come to identify with their bodily sex if natural development is allowed to proceed.

Those who do begin to transition at an early age often find themselves experiencing regret later in life.

As it turns out, my friend Walt is one of the many whose personal testimony is included in Anderson’s book. “Living as a woman,” Anderson notes, “brought him ‘no lasting peace.’” Instead, after transitioning, Walt’s gender confusion only seemed to worsen.

Speaking of the many people now in his network of “detransitioners,” Walt says, “Every single one of them had unwanted pain caused by sexual abuse, deep trauma, mental disorders, horrible loss, or terrible family circumstances in early life.” That is a far cry from what the transgender promoters say, asserting that transgenderism is an immutable, inborn trait.

That’s a message the whole world needs to hear. And it’s the message that Ryan Anderson skillfully, compassionately delivers.

(Full disclosure: I have a history with Ryan Anderson. When I was a gay man who opposed same-sex marriage, Ryan helped give me a platform to deliver my message. He was my editor at Public Discourse; we have served together in panel discussions at The Heritage Foundation and The National Review Institute, and he has quoted me in articles and in his book written on the aftermath of the U.S. Supreme Court’s Obergefell decision, Truth Overruled!)