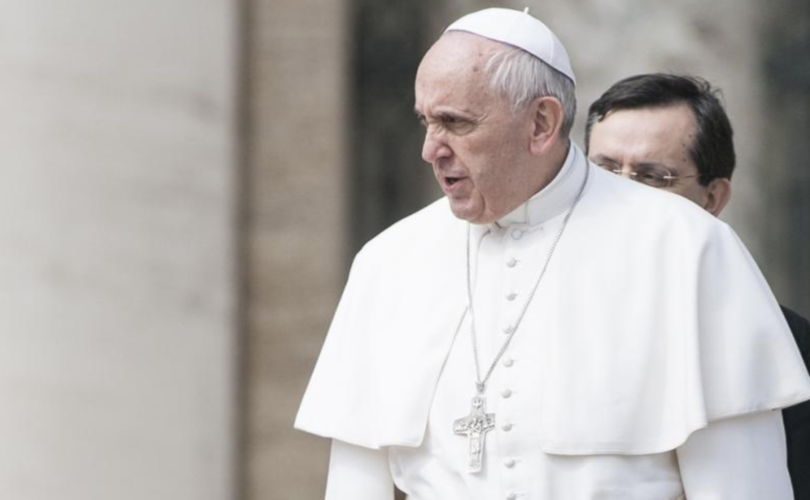 Authors like Ross Douthat, Phil Lawler, and Henry Sire have provided copious documentation of the Pope’s Machiavellian modus operandi. It may help to recall, in the midst of Viganògate, a few egregious examples from the past that demonstrate how it works.

We remember when the pope deliberately washed the feet of women, against the universal liturgical law that limited the washing of feet to men. Then he changed the law to allow for the inclusion of any baptized member of the faithful—and proceeded to violate his new law by washing a Muslim's feet. Even if one argues that the pope, as the highest legislator, is not bound by these laws in the same way as his subjects are, he should (as popes in the past have done) set the first and best example of observing Church discipline, since others will, in fact, take their cue or their justification from him. Thus, his public actions contrary to discipline are meant to transmit a spirit of contempt for law, with the message that subjective motives of “charity” or “mercy” can and should lead to the practical neutralization of Church discipline.

We have seen the same contempt, message of neutralization, and stirring up of confusion in regard to the German bishops’ disputes over whether communion should be given to Protestant spouses of Catholics. The pope first feinted to the left, favoring the liberal bishops, then feinted to the right, seeming to support backpedaling from the CDF, and finally let it be understood that the bishops could do whatever they pleased, even if the result will be a cuius regio eius religio checkerboard of dioceses with contradictory policies.

Then, in his manner of modifying the Catechism of the Catholic Church as well as in the new content that was ordered to be inserted, Pope Francis pushed through another victory for progressivism by effecting a change in doctrine, or initiating a motion towards that end, without having used a form of language that is unequivocally heretical. We saw that he did precisely the same thing in Amoris Laetitia (taken together with the Buenos Aires guidelines), in his revisions to the annulment process, and in many other cases, using techniques such as equivocation, studied ambiguity, internal contradiction, false quotation, and stalling tactics between phases to accomplish his purposes.

Again and again he displays this duplicity, playing off one side against the other, keeping people guessing—and keeping employed an army of anxious conservative Catholics who rabbinically reshape each act or statement. But a situation in which it is thought necessary to bend over backwards to defend the pope against undeniable appearances of doctrinal rupture and moral corruption is already a crisis of unprecedented scope. It means, at very least, that this pope has permanently lost the trust of many, and has therefore introduced a strong note of instability into the very office of the papacy, since future popes will be governing from a weak foundation. All of this coming from a Pope who told youths at a Mass in 2015 to “make a mess.”

There are still some Catholics who are digging in their heels. They refuse to believe that any pope can be as bad as this pope would have to be, if the most natural “reading” of things turns out to be true—so it must not be true! “Perhaps all of these doctrinal contradictions and moral meanderings and policy flip-flops are being misreported or misunderstood. Let’s circle around and defend the Pope at all costs from these naysayers, scandalmongers, and calumniators!” By doing this, they are effectively consigning their heads to a permanent vacation in the sand. This is one kind of coping mechanism: it effectively denies that there is a problem. It is like a child who puts his hands over his ears and says some loud nonsense in order to avoid having to hear what an adult is saying to him.

There is another group I have known, a smaller and more rarefied one, made up of intellectuals who have convinced themselves that whatever the pope is saying must either be true (since he is, after all, the vicar of Christ, and we want to be on his team, right?), or be able to be deftly rendered true by clever scholastic distinctions about the level of authority of a given statement, the location of a prepositional phrase, a faulty translation into French, etc. This is, I believe, a psychological coping mechanism for not dealing with the now notorious fact that we have a pope who is somewhat like a truck with failed brakes careening out of control down a steep mountain and heading for a mighty crash.

By this point, people who evade the truth about Francis are oddly like the Pharisees who, instead of surrendering to the divine reality of Our Lord, argued ceaselessly about their human traditions in the interpretation of the Law and whether or not He was violating this or that aspect of it. In other words, rather than face up to the big reality, they sought refuge in their Jewish scholasticism. In our present case, the big reality is not something good and holy like Our Lord in the midst of His disciples, but something sinister and repugnant, like Judas stealing from the common purse, betraying with a kiss, and hanging himself.

But, as many have pointed out, this situation is no cause for despair. It is, on the contrary, a dramatic and long-overdue end to an unsustainable exaltation of the papal office, where the pope is cast as a combination Delphic oracle, globetrotting superstar, dynamo of doctrinal development, and standard meter bar of orthodoxy. This is not only contrary to Catholicism, it is corrosive of it, because it replaces the primacy of inheriting the deposit of faith from divine revelation through apostolic transmission with the primacy of papal voluntarism. Such a distortion of the dogma of Pastor Aeternus could only end in flames.