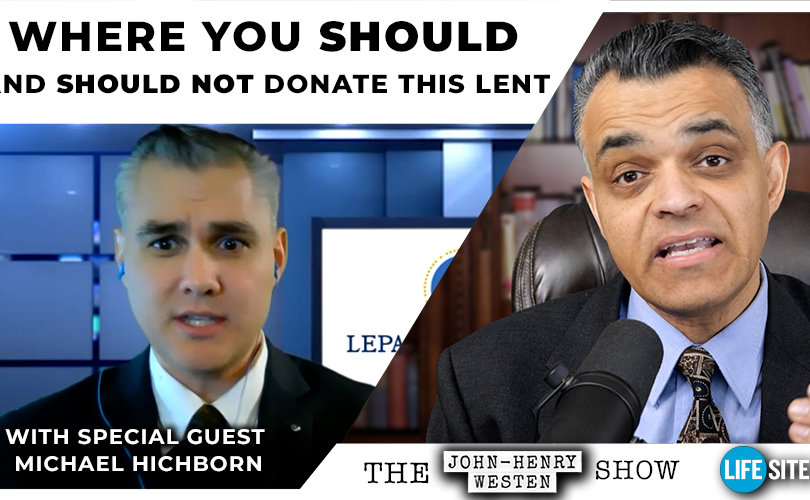 March 5, 2021 (LifeSiteNews) — For this episode of The John-Henry Westen Show, I speak with Michael Hichborn, founder and president of The Lepanto Institute, on his investigative work into the “charity” organizations of the bishops which have affiliated themselves with the promotion of abortion and contraception. Hichborn tells me how the faithful can use this Lent to stop donating to these groups, and instead give their money to orthodox charities.

Last year, Hichborn released some explosive reports into Catholic Relief Services, which detail that it has funded pro-abortion and pro-contraception programs in Africa. He says that “the curriculums that they were using were themselves promoting abortion in the Dreams Project.”

Hichborn found out that this project, created by Dr. Deborah Birx, “established itself with the specific goal of introducing young girls to contraception,” and that CRS, although it introduced the project, leaves the implementation to others. He states that the official arm of the bishops also “created two health referral networks in Africa: one in Nigeria, one in Cameroon,” which again promote contraception and sometimes assist in illegal abortions for young women.

Further, Hichborn has investigated the Catholic Campaign for Human Development, which he says was started “to fund Saul Alinsky community organizing groups.” He tells me that CCHD gave funding close to a quarter of a million dollars to “five organizations [which] were themselves promoting abortion … [and] LGBT activism.” Even more shocking, the executive director of one of the groups, Workers Dignity Project, was actually caught on video celebrating the murder of unborn children, and laughing about Catholics having abortions.

Before releasing these reports, Hichborn always contacted the organizations, but never received a response back — which is why he decided to share this information so that faithful Catholics could be informed that their money is in fact going to fund groups that act in contradiction to Church teaching. “I put my reports together in such a way that it’s easy for people to see the evidence … for people to understand what the situation is and to make a decision on their own.”

Be sure to access the Lepanto Institute’s Charity Report here: https://www.lepantoin.org/charity-reports/