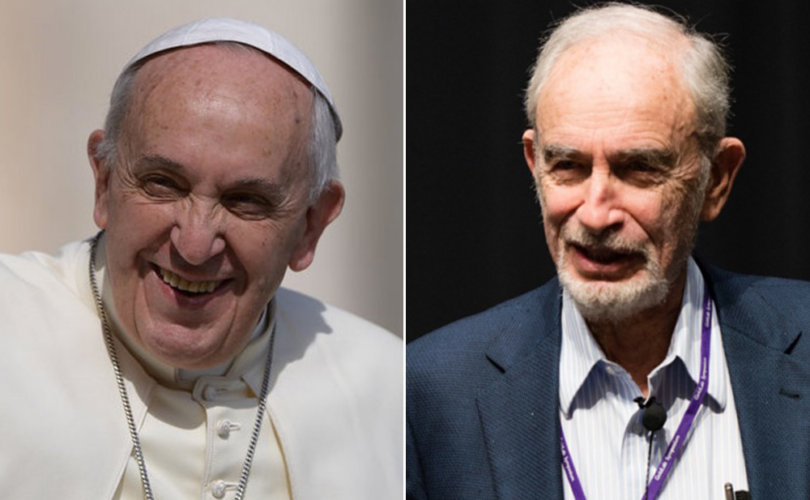 February 10, 2017 (LifeSiteNews) — You can imagine my shock as a Catholic when I read a passage from the father of the modern, pro-abortion population control movement where he denounces faithful Catholics as “terrorist[s].”

Here is what pro-abort population controller Dr. Paul Ehrlich wrote in his 2014 book Hope on Earth: A Conversation:

“Thus you have ‘God-fearing’ people trying to maintain their rigid positions, especially trying to control the lives of women. I consider that their rigid opposition to something so basic, so critical to the future of life on Earth, as controlling reproduction to be just as unethical as any major affront to the environment or terrorist act.”

And there it is. For Ehrlich, Catholics who oppose contraception and abortion do so because of their “rigid positions.” In fact, maintaining such a position is so abhorrent to Ehrlich that he thinks it’s morally equivalent to a “terrorist act.”

Ehrlich, who has vehemently hated the Catholic Church until Pope Francis came along, has now been honored by the Vatican to present a paper on saving the world from extinction at an upcoming conference.

READ: He supports forced abortion, sterilization. Next month, he’s speaking at the Vatican.

The implications of this invite cannot be underestimated.

Writes Michael Pakaluk in Crux Now: “Erhlich do[es] not simply contemplate abortion and contraception for population control: it is [his] main message. To invite [him], therefore, to speak on the practical question of population is implicitly to embrace [his] ethical commitments.”

When reading Ehrlich’s above passage, I was struck how it reflected a theme faithful Catholics have recently been hearing from Pope Francis.

For more than a year, Francis has denounced faithful Catholics who are concerned about how he is leading the Church as being what he calls too “rigid.”

The pope says such Catholics are too concerned about following the 10 commandments. They start traditional orders that promote “rigidity.” They are attracted to the ancient Latin Rite because of an “attitude of rigidity.” They are “heretical” for holding with “rigidity” that the Church teaches “this or that,” “black or white.” Hundreds of such condemnations he has made could be added to this list. If you thought this pope was a gentle, humble man who simply got along with everybody, sorry, but you’ve been sorely misled.

As a Catholic, I find it deeply concerning that such a renowned enemy of the Church as Ehrlich has been honored with a platform at the Vatican.