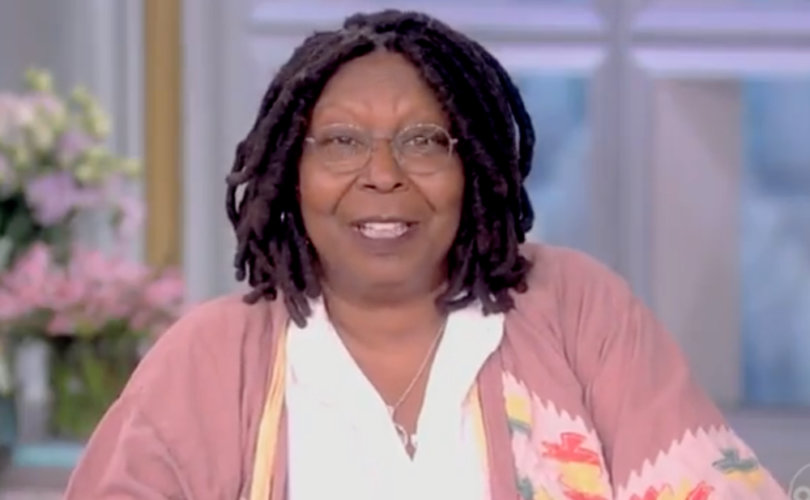 Whoopi Goldberg in her tV comments against Archbishop CordileoneTwitter screenshot

(LifeSiteNews) – It is said that if you get your philosophy from a comedian that you shouldn’t be surprised if it turns out to be a joke. We might also say that if you get your theology from an actress – someone who plays make-believe for a living – it might be pretend.

You might have better things to do than to waste time thinking about what a washed-up actress and current co-host of The View – the show where the Zoom-class learns how to be woke as a boomer – then again you might not have seen Whoopi Goldberg opine about the Communion ban leveled at Nancy Pelosi.

During an episode on Monday, Goldberg – whose given name is actually Caryn Johnson – uttered a statement about Archbishop “Lionheart” Cordileone’s forbidding of Pelosi from Holy Communion that was dumb even for the standards of The View.

“This is not your job, dude… that is not up to you to make that decision,” she protested.

Well, I wonder if Caryn Johnson, a woman who seems to have “culturally appropriated” a Jewish name, would speak about a cleric from another religion in such a flippant manner. Can we imagine her calling an Imam or a Rabbi “dude?” I imagine not.

At any rate, her comments about His Excellency, are not only disrespectful, but they are also idiotic.

READ: Banning Nancy Pelosi from Holy Communion is an act of love that could save her soul

You do not have to be a theologian or a canon lawyer, or even a washed-up actress who pretended to be a pretend nun in a 90’s flick, to understand the professional mandate of a bishop.

Proof @WhoopiGoldberg is the dumbest person on TV.

She is so dense she doesn’t know who can ban a Catholic from taking communion. https://t.co/nBYsUmXlBi

Even if you do not believe Catholicism, it is obvious that a bishop would be in charge of Catholicism in his diocese. We understand that mayors have a certain jurisdiction over their towns, that managers manage stores, and that teachers lead classrooms. All of these positions entail a disciplinary element.

It is quite literally a bishop’s job to do what Cordileone did.

Goldberg admits abortion is a sin?

Typical of the leftist rhetoric that constitutes the veritable cacophony of opinions vomiting forth from The View, is inherent contradiction of one’s own argument.

After Goldberg tells the bishop that to do his job is not his job, she then stumbled for a moment while pretending to have an inciteful opinion from theology that was provided for her from the show’s preparatory staff.

“What is the point of Communion,” the great daytime talk-show theologian asked the audience rhetorically. “It’s for sinners… it’s the reward of saints, but the bread of sinners.”

I am not sure if Goldberg knows that it means to speak of the “point” of something, which is to say the “goal” or “purpose” of a thing. The purpose of Holy Communion is for the Christian to partake in the Sacred Mystery of Christ’s Sacrifice and to “have life within you,” as Our Lord said in John 6.

This comment about Communion being the “reward of saints, but the bread of sinners” is, as far as I can tell, from a homily given by Pope Francis in 2021.

Francis is sadly not known for his doctrinal clarity, but he is not wrong to say that the Eucharist is “bread” for sinners, while also a “reward” for saints. All saints that have lived since the time of Christ have been sinners, and all have been rewarded for their commitment to God’s Laws by receiving Holy Communion in a worthy manner.

I should probably not give too much thought to the thoughts of a thoughtless TV personality, however, maybe this is one of those moments where something true was said on The View.

In addition to opining on the nature of Holy  Communion, Goldberg implied that the bishop disallowing Pelosi from the Sacrament was in contradiction to the doctrine of the separation of Church and State. Never mind that this view is not an official doctrine found on the U.S. Constitution, but even it were, it would be a nonsensical association on her behalf.

READ: There’s a long list of pro-abortion ‘Catholics’ who should be banned from Holy Communion like Pelosi

Even if Cordileone went so far as to excommunicate her from his diocese, it would still not be a usurpation of the imagined dogma concerning Church and State. The bishop told her to repent and return to a State of Grace before receiving Communion again; he did not attempt to usurp civil authority under the guise of Catholicism.

To say that Cordileone transgressed the separation of the civil and  ecclesial  powers by telling Pelosi to follow the rules of the Church would be like saying I would transgress your right to freedom of assembly if I disallowed the demonesses of The View from assembling in my home. They have the right to assemble, but I have the right to not be subject to such unfortunate company.

Whoopi ended her catechism by saying to the Cordileone, “how dare you!”

Wow, I wonder how the bishop will come back from such a thundering castigation from so formidable an adversary…

How dare anyone take Goldberg seriously?

Sadly, many of her viewers will believe that she has the right to an opinion on the subject.

Let’s all hope that Goldberg’s righteous indignation about a topic she is completely ignorant of grows to the point where she refuses to talk about the Church on TV at all. Actually, let’s hope she stops talking on TV all together.

1
Police arrest Freedom Convoy leader Tamara Lich yet again
2
Why we shouldn’t be too excited by the Supreme Court’s reversal of Roe v. Wade
3
The end of Roe threatens a lifestyle, and that’s why pro-abortion backlash is so fierce
4
Priest’s open letter to Pope Francis: Please correct your ‘serious’ errors and defend divine truth
5
Both sides can agree that feminists going on ‘sex strike’ is a good thing
Subscribe to Daily Headlines »