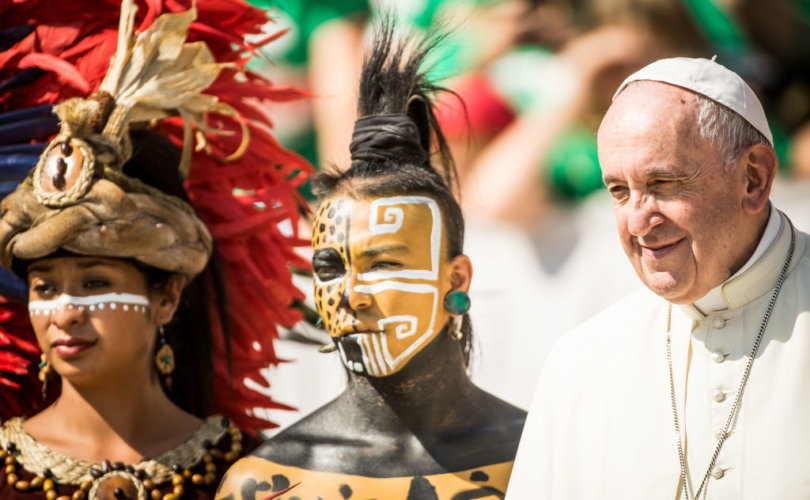 June 20, 2019 (LifeSiteNews) – In recent decades, there has been a great and deep confusion about the concept of inculturation. We can see this confusion rising again to the surface with the newly-released Instrumentum laboris or working document of the upcoming Amazon Synod (see here for an unofficial English translation).

Inculturation has been taken to mean that the Catholic faith and its practice should be changed to conform to an indigenous culture, and should assimilate that culture’s own religious beliefs and practices. In other words, Catholicism is seen as raw material and the alien culture as an agent of transformation. The Instrumentum laboris tells us, for example:

In function of a “healthy ‘decentralization’” of the Church (cf. Evangelii Gaudium 16), the communities ask the Episcopal Conferences to adapt the Eucharistic ritual to their cultures. (126d)

We must be bold enough to discover new signs and new symbols, new flesh to embody and communicate the word, and different forms of beauty which are valued in different cultural settings. (124)

The document continues with a strangely authoritarian passage, culminating in Marxist utopian language:

The celebration of the faith must be carried out in an inculturated way so that it may be an expression of one’s own religious experience and a bond of communion in the celebrating community. An inculturated liturgy will also be a sounding board for the struggles and aspirations of the communities and a transforming impulse towards a “land without evil.” (125)

How will such liturgies look? The document tells us:

It is suggested that the celebrations should be festive, with their own music and dances, using indigenous languages and clothing, in communion with nature and with the community. … We are asked to overcome the rigidity of a discipline that excludes and alienates, and practice a pastoral sensitivity that accompanies and integrates.

The language of “communion with nature and with the community” is decidedly naturalistic and horizontalist, at loggerheads with the supernatural and vertical character of the revealed religion of Christ and its cultic action: the formal, objective, solemn, public worship known as the sacred liturgy. We note also a radical departure from the unanimous teaching of all the popes of the Catholic Church, including John Paul II and Benedict XVI, who underlined, with Vatican II, that the traditional music of the Faith, Gregorian chant and polyphony, should be given the foremost place—as indeed the first missionaries who planted the Cross on the soil of South America themselves did, training natives to be musicians and composers.

The “inculturation” described in the Amazon Synod working document is a false approach, rooted in religious indifferentism, dogmatic relativism, and liturgical experimentalism. Ironically, if acted upon, this approach would only colonize non-Europeans with the modern European ideological stance of ex-Christian self-loathing—a hatred directed uniquely at Europe’s own past and the Church’s own traditions.

In reality, pagan cultures to which Catholic missionaries bring the Faith are in need of conversion and elevation. Whatever elements might be taken from these cultures, once duly purged of sin and error, stand as material to the “form” imparted by the life-giving Catholic Faith. It is the Church that is the agent, form, and goal in any true inculturation, while the culture is the matter that receives the form from the agent for the sake of salvation in Christ.

Many cultures, for example, benefited from the insertion of the Roman Mass in its integrity and fullness. The Japanese and Chinese reacted to the beauty and majesty of the traditional Latin liturgy as celebrated by the missionaries, welcoming it as a sublime expression of a divinely revealed religion, powerfully conveyed in ceremonies and texts. Hostile cultures are, in time, overcome by the persistent witness of a religion more definite, more coherent, and more beautiful than any of the false religions cobbled together by the fallen human race.

In any case, it is never necessary to seek, as a goal, to take elements of a prevailing heathen culture and incorporate them into the sacred culture. If there are elements worthy of elevation into the sacral domain, this will happen slowly, subtly, with fine discernment and discretion. Running after these elements in a kind of desperate hunt for relevancy is doomed to failure; it is a kind of whoring after ephemeral relevance, a prostitution to the present age and its malevolent prince.

Inculturation, as it has been understood and practiced by liturgical revolutionaries, is one more ploy of Satan to destabilize and denature the Church of God, to water down her distinctiveness, to poison and pollute her divine cultus and human culture. This is not what the great Jesuit, Dominican, and Franciscan missionaries did; they brought forward the Catholic faith in all the splendor of its abiding truth, and by that light, they converted nations and baptized all that was noble and good in their people.

Things that are really true, good, and beautiful in a native people and their civilization will line up in front of the doors of the church and beg admission; such things will sue for peace, and beg pardon, and offer themselves like lambs for the sacrifice. Then we may take them up in our arms and make of them vehicles of grace. But not in any other way. As St. Augustine says: “He that believes not, is truly demoniac, blind, and dumb; and he that has not understanding of the faith, nor confesses, nor gives praise to God, is subject to the devil.” The Church does not go to the blind and dumb to ask for advice on how she should worship or what she should believe; she does not go to subjects of the devil, in desperate need of baptism, and beg them for a seat at Belial’s table.

The Instrumentum laboris, however, bluntly sets aside traditional views of evangelization, salvation, and sanctification:

An insincere stance of openness to the other, as well as a corporatist attitude, which reserves salvation exclusively to one’s own creed, is destructive of the same creed. In the parable of the Good Samaritan, Jesus explained this to the inquiring lawyer. Love lived in any religion pleases God. “Through an exchange of gifts, the Spirit can lead us ever more fully into truth and goodness.”

In this remarkable text, Christians are said to be “insincere” if they are not so “open to the other” that they will admit that their Christianity is lacking some truth or goodness that the non-Christians can offer instead. Moreover, the de fide dogma extra ecclesiam nulla salus, outside the Church there is no salvation, is dismissed as a “corporatist attitude” destructive of one’s own creed, in spite of the fact that no one can, in fact, be saved who does not belong to the Church and who does not confess, either explicitly or implicitly, that there is salvation in no other Name than that of Jesus Christ. The document then fatuously asserts that “love lived in any religion pleases God,” although the New Testament makes it clear that only the love poured into our hearts by the Holy Spirit, which we call charity, is the love of God that pleases Him and makes Him see His beloved Son in our souls.

The Instrumentum laboris is, in short, another textbook example of Modernism, and another low-water mark during an already disgraced pontificate. For further commentary on this problematic document, see Roberto de Mattei, “The Amazonian Church of Pope Francis” and Julia Meloni, “The Amazon Synod’s Long Game Is More Radical Than You Think.”