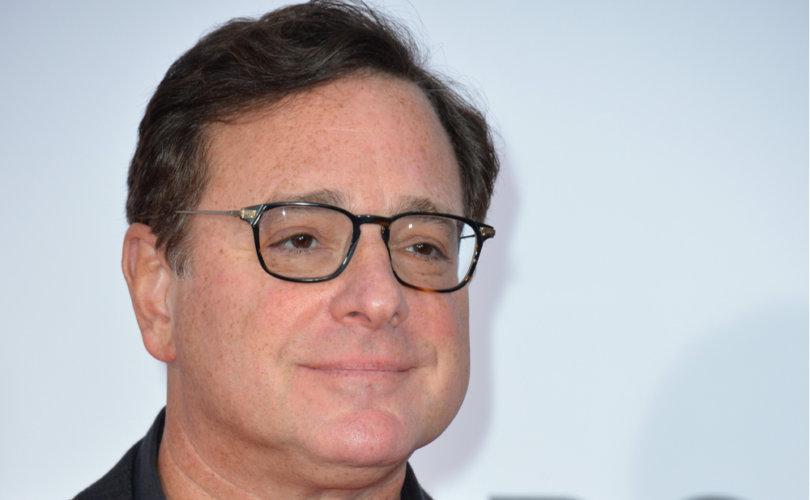 Most people will remember Saget as the affable Danny Tanner, an endearing widowed father of three girls on the 90s hit show Full House. They also likely have fond memories of him as the genial host of the hugely successful America’s Funniest Home Videos of the same era.

Despite being known as “America’s Dad,” Saget — like so many in the entertainment industry — had a dark side. His stand-up comedy was littered with raunchy jokes and crass humor. It’s not appropriate to repeat in this space the vulgarity he spewed on stage during his career. Suffice it to say he seemed oddly determined to undermine the very thing his morally upright, amiable public persona stood for. And, sadly, that’s exactly how he’s being remembered.

“Bob Saget’s wholesome gift of a dirty mouth,” read a recent headline from the Washington Post. Liberal site Salon published a similar article: “Bob Saget, a dirty daddy: Appreciating the darker elements of the talented comedian’s work.” That title seems to have been inspired by Saget’s 2014 memoir, Dirty Daddy: The Chronicles of a Family Man Turned Filthy Comedian.

It’d be a stretch to claim that Saget’s death marks the end of an era. But it’s not difficult to see that woke television executives in the 21st century aren’t that interested in depicting men as, well, men anymore. Sure, Saget’s Full House character wasn’t exactly an alpha male, but “toxic masculinity” (of any kind) is anathema these days.

That’s a shame, because the success of family-friendly programming pre-cancel culture was largely due to its reliance on the intact home headed by a strong father figure. Shows like Boy Meets World, Family Matters, and Will Smith’s Fresh Prince of Bel-Air are few of the above average examples of that in the 1990s.

To those who watched those programs, as I did, James Avery’s “Uncle Phil,” William Daniels’ “Mr. Feeney,” and Saget’s Tanner are remembered with great affection, primarily because they imparted valuable life lessons at the end of each episode. Even if critics at the time believed the television dads of the 90s were a step down from the TV dads of previous generations, my teenage self found them to be entirely realistic, and far more masculine than the bumbling male leads of today.

On reality shows, the Disney Channel, and elsewhere, kids now are often portrayed as the wise and insightful ones, not their dads, who are usually overweight and bossed around by their much smarter career-driven wife, liberal teenage daughter, or gay neighbor. The end goal is not difficult to detect: Tear down the patriarchy (and traditional family unit) by making adult men look like oafish goofballs.

One show that bucked this trend, and was rewarded in the ratings for doing so, was Tim Allen’s Last Man Standing (2011-2021). Despite his success, Allen — who is widely known for having conservative views — had to fight back an army of liberal critics every step of the way. The show was eventually canceled by ABC after six seasons. Fox picked up the series until its finale three years later. But Allen didn’t come out of the affair unscathed. He was dropped as the voice of Buzz Lightyear from the Toy Story franchise in 2021, clearly for political reasons.

Another series that’s skyrocketed in popularity in recent years is Cobra Kai, the Netflix reboot of The Karate Kid films in the 1980s. Although the two warring dads on the show aren’t perfect (one has a major drinking problem), they do mature as the seasons progress. The younger characters are also clearly subordinate to them. Cobra Kai is a refreshing call back to a timeless style of programming that reflects the real-life dynamics of parents and teenagers, despite being a rather R-rated series with crude language.

TV dads have been a staple of pop culture since television was invented. When portrayed well, they can make a lasting, positive impact on those who watch them, especially young boys, who in this day and age are all too frequently raised without strong men in their lives. Bob Saget might not have enjoyed the image he had for portraying a clean-cut father figure on screen, but America was better off because he did. I pray he was able to reconcile with God before his untimely passing.