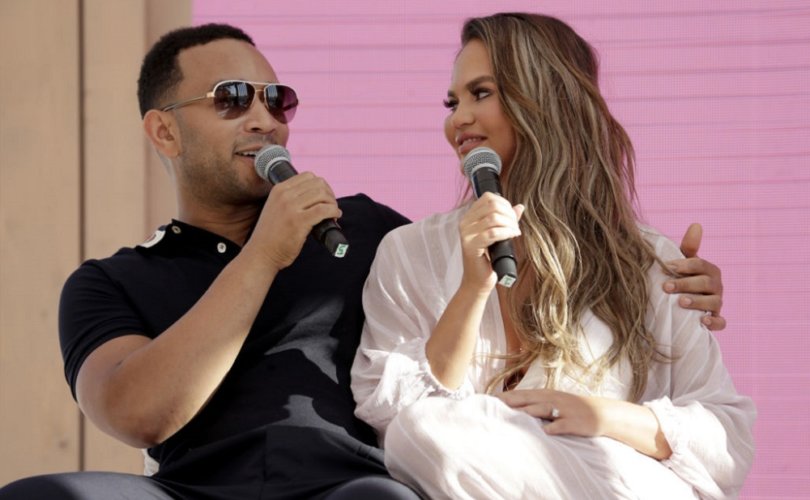 October 5, 2020 (LifeSiteNews) – On October 1, celebrity model Chrissy Teigen posted a heartbreaking photograph to Instagram. In the photo, she is sitting on the edge of a hospital bed, wrapped in a blanket, her face seized with grief. Her caption explained that she and her husband John Legend had lost their pre-born son, whom they named Jack. “We are shocked and in the kind of deep pain you only hear about, the kind of pain we’ve never felt before. We were never able to stop the bleeding and give our baby the fluids he needed, despite bags and bags of blood transfusions. It just wasn’t enough.”

She and her husband, she wrote, were mourning their son: “Jack worked so hard to be a part of our little family, and he will be, forever. To our Jack — I’m so sorry that the first few moments of your life were met with so many complications, that we couldn’t give you the home you needed to survive. We will always love you.” Another heartbreaking photo shows Teigen and Legend cradling their deceased son.

The internet response was, for once, free of the ugliness that generally characterizes social media. But for many pro-lifers, it was impossible not to notice that the very same people currently campaigning for the right to end the lives of pre-born children the same age as little Jack suddenly forgot that according to their ideology, Jack was not a person. Jack’s life ended at twenty weeks gestation at a time when Democrats from New York to New Jersey are expanding abortion rights to allow people to abort children the same age as Jack was when he passed.

Hillary Clinton offered her condolences, stating that she was “so deeply sorry to hear of this loss.” Abortion activist and vice presidential candidate Kamala Harris also chimed in, stating that she and her husband “are deeply sorry for your loss.” And in a moment of supreme chutzpah, Planned Parenthood tweeted: “We’re so sorry to hear that Chrissy Teigen and John Legend lost their son, and we admire them for sharing their story.”

Planned Parenthood would have just as much admiration if Teigen and Legend had aborted Jack at twenty weeks at one of Planned Parenthood’s facilities and shared that story. Whether you’re mourning a loss or shouting your abortion, Planned Parenthood is here for you. It’s part of the P.R. that allows the company to continue making a killing.

This is not an attempt to make a personal tragedy political. It is simply to point out that our culture, our elites, pro-abortion politicians, even the abortion industry — everyone knows that Jack was a baby boy, not a clump of cells. That is why condolences from abortion extremists like Clinton and Harris came so easily: because those condolences were sincere, because Clinton and Harris know that the baby in the womb is a baby. Despite that knowledge, they defend the right to have children like Jack killed in the womb.

In Planned Parenthood facilities, baby boys and girls just like Jack don’t get blood transfusions. They get pulled apart with forceps, and the abortionist “deflates” their heads to ensure that they are born dead. Hillary Clinton knows this. Kamala Harris knows this. The abortionists at Planned Parenthood know this. Everybody knows this, and everybody supports it anyway. Everyone has seen a sonogram, or an ultrasound. When people say they are expecting, nobody asks them what they are expecting. That’s because everybody knows. And if they say they don’t, ask them one question: What do you think the baby on the last ultrasound you saw would look like once the abortionist is done with him?

The public and universal affirmation of Jack’s value and humanity has been a beautiful thing. This affirmation reveals something ugly and sinister about our culture’s support for abortion. It means that Planned Parenthood, Hillary Clinton, Kamala Harris, and the rest of the abortion activists offering their condolences for the loss of this little boy know that when they advocate for abortion to be legal for children like Jack, they know what they are doing. They know. And they do not care.

We should not forget that.

Jonathon’s new podcast, The Van Maren Show, is dedicated to telling the stories of the pro-life and pro-family movement. In his latest episode, Marjorie Dannenfelser from the Susan B. Anthony List tells Van Maren that this election is crucial for the pro-life movement. Dannenfelser warns listeners that if the Democrats win, it will have a generational impact, as the left will fight to take away the core principles of our nation's founding. You can subscribe here and listen to the episode below: