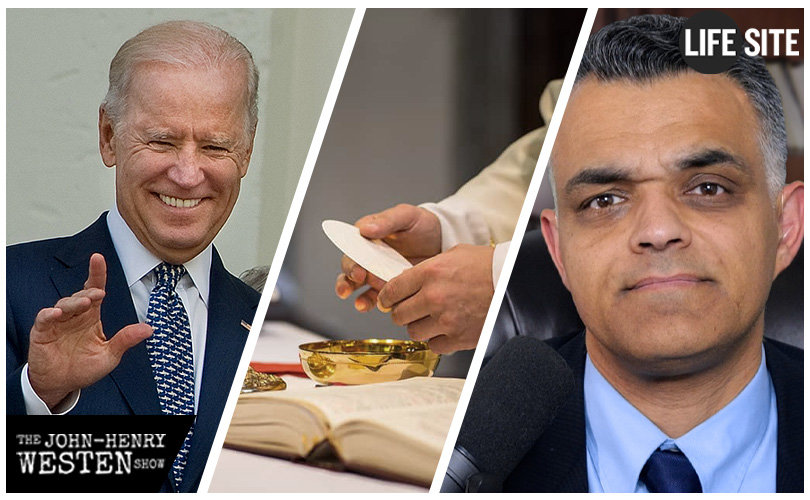 (LifeSiteNews) — An unbelievable amount of press attention has focused on the president of the United States receiving Holy Communion. Given that even most Catholics don’t believe in the reality of Communion, what’s all the fuss about?

After Biden revealed publicly that the Pope said he was a good Catholic and that he should continue to receive Communion, Biden gushed over the Pope almost in tears.

You know, it’s also really weird that the Vatican was supposed to air the meeting between the president and the Pope, but then cut off the feed. I unpack all of this in today’s episode of The John-Henry Westen Show.

Thousands of news stories all over the world last week spoke of President Joe Biden being told by Pope Francis that he could receive Holy Communion. One strange part of the story is that the media was supposed to air some of the meeting between Biden and the Pope, but then cut the feed showing only the initial arrival of Biden, then the parting gift exchange, and none of the actual discussion between the two.

This is a report from the Associated Press’ Vatican correspondent: “The Vatican on Thursday abruptly canceled the planned live broadcast of U.S. President Joe Biden meeting Pope Francis, the latest restriction to media coverage of the Holy See that sparked complaints from White House- and Vatican-accredited journalists.”

And the excuse from the Vatican? Vatican spokesman Matteo Bruni said the revised plan reflected the “normal procedure” established during the COVID pandemic for all visiting heads of state or government.

So now I’m going to let you in on what this is really all about. Many have no clue. In fact, according to a poll in 2019, two-thirds of Catholics don’t get it either.

What this is all about is really quite simple. It is best understood with the Bible in hand. So stop here and grab one if you have one so you can follow along.

Of all the things in the Bible Jesus was most insistent about, this one truth was the top by a long shot. In fact, it is the only case in the Bible where it speaks of disciples or followers of Jesus leaving Him, never to return, and Him doing nothing about it because He was so insistent on the truth of this one teaching.

Here is the scene. Jesus had the day before done His multiplication of the loaves and fish.

The people were hungry again and found Him, and asking Him for a sign like God gave the Israelites in the desert – in other words they wanted more free food. He counters they by calling Himself the Bread of Heaven.

I am the bread of life. Your fathers did eat manna in the desert, and are dead. This is the bread which cometh down from heaven; that if any man eat of it, he may not die. I am the living bread which came down from heaven. If any man eat of this bread, he shall live for ever; and the bread that I will give, is my flesh, for the life of the world. The Jews therefore strove among themselves, saying: How can this man give us his flesh to eat?

Let’s pause there. We learn right away why the crowd had a hard time with his message. Because he is speaking of giving them His flesh to eat.

So what does he do? Does he clarify and say: Hold on, hold on, I’m not speaking literally … I’m speaking symbolically like when I said I was the door to eternal life. No. Here is what he says, let’s pick it up again at verse 54:

Then Jesus said to them: Amen, amen I say unto you: Except you eat the flesh of the Son of man, and drink his blood, you shall not have life in you. He that eateth my flesh, and drinketh my blood, hath everlasting life: and I will raise him up in the last day. For my flesh is meat indeed: and my blood is drink indeed. He that eateth my flesh, and drinketh my blood, abideth in me, and I in him. As the living Father hath sent me, and I live by the Father; so he that eateth me, the same also shall live by me. This is the bread that came down from heaven. Not as your fathers did eat manna, and are dead. He that eateth this bread, shall live for ever. These things he said, teaching in the synagogue, in Capharnaum.

And then we come to the key verse, 61, where we are told that many of His own followers, His actual disciples, were now struggling with this teaching. Here it is:

Many therefore of his disciples, hearing it, said: This saying is hard, and who can hear it?

So what will Jesus do? He knows why they are grumbling. He knows that it is about Him saying they are to eat His flesh and drink His blood. But He doesn’t back pedal. He doesn’t say calm down everyone I’m just speaking symbolically here not literally. What He does do is startling.

But Jesus, knowing in himself, that his disciples murmured at this, said to them: Doth this scandalize you? If then you shall see the Son of man ascend up where he was before?

Wow! He tells them, well, if you think that is too tough to believe what are you going to do when you see me ascend to the very throne of God, and sit upon it as God Almighty?

He then tells them their fleshly, or worldly understanding can’t comprehend the truth of the spirit He is speaking to them.

He knew that some of them would not believe, but only those that were granted the truth by the Father.

And then check this out. Verse 67 is where we hear the only time in the Bible that many of His disciples left Him permanently.

After this many of his disciples went back; and walked no more with him.

Does Jesus run after them to clarify that He was only speaking symbolically? What kind of a monster would He be if He allowed people to leave Him and thus leave eternal life for a silly misunderstanding?

If it was true that He was only speaking symbolically, that it was not His actual flesh they were to eat but only a symbol, or spiritual representation of His flesh they all would have come back and said: Phew. We thought you were speaking of cannibalism.

And in fact, if you look at history you will find that is exactly what the early Christians were accused of — cannibalism.

But Jesus not only let’s them go. He actually turns to his chosen twelve Apostles; the ones who have been with Him from the beginning, and He is ready to let them go too over this truth. The truth of His real presence in Holy Communion.

Then Jesus said to the twelve: Will you also go away? And Simon Peter answered him: Lord, to whom shall we go? Thou hast the words of eternal life.

The apostles didn’t get it. They didn’t magically understand where the others didn’t. Peter’s response says it all. He was admitting they too had no idea what He was talking about, but that they submitted to Him because they knew Him as the Messiah, who was sent from Heaven.

The truth would become clear to the apostles at the last supper. In all four gospels of Matthew, Mark, Luke and John we read in the Last Supper account that Jesus takes bread and blesses it and breaks it, giving it to them to eat, telling them it is His body. He also takes a chalice of wine and blesses it and gives it to them, telling them it is His blood and to drink it.

As Scripture proves Scripture, this truth is confirmed in the writings of St. Paul who asks rhetorically in 1 Corinthians 10:16:

This same truth of Christ from 2000 years ago, which caused so much consternation in His day also causes consternation today. And today too many of his disciples cannot accept this truth which He was so insistent upon. We need to embrace the truth.

And once we realize what Holy Communion is — that it is the body, blood soul and divinity of Christ, that it is Jesus Himself — we will know that we must as St. Paul teaches examine ourselves before receiving Him. For if we receive Him unworthily we are guilty of the body of the Lord — literally of killing him. And thus we in the words of St. Paul eat and drink condemnation to ourselves.