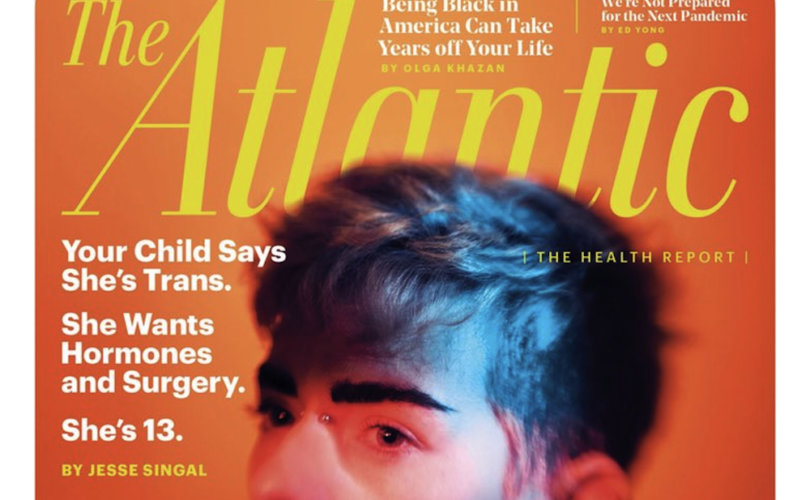 WASHINGTON, D.C. June 22, 2018 (LifeSiteNews) — A recent article in a venerable American magazine expresses belief that suffering can be relieved through sex reassignments, and yet it has inspired a volley of angry tweets and articles from trans activists.

Why? Because the author of the Atlantic piece, Jesse Singal, interviews women who have regretted their transgender treatments, parents who resisted pressure to allow their minor children hormone therapy, and sex-reassignment therapists who urge caution.

Victor Manuel Markoff tweeted, “F(***) off with this transphobia. And on pride month too. This article and cover are an absolute disgrace. You should be ashamed of yourself.”

Parker Malloy tweeted, “This guy’s one-man crusade against trans people has gone on for years. It really doesn’t make sense. Sad that the Atlantic gave him a cover story to spread his pseudoscience and bigotry.”

Harron Walker of Jezebel magazine got in on the Singal-bashing action by writing “a lot of trans people, myself included, loathe his coverage of trans issues with a once-fiery passion that has since cooled into a dormant rage.”

Instead of questioning the veracity of Singal’s interviews, however, Walker concentrated on the writer’s potential motives and asked readers to write to him (or her) if they knew what Singal’s “f(***)ing deal” was.

Walker objects to the fact that most of the “transitioners” Singal spoke to were women who “de-transitioned.” She or he also objected to the Atlantic publishing “as its cover story a cis (sic) writer’s article about trans people who aren’t trans–during Pride month, no less.”

Apparently, LBGTQ activists have exclusive ownership of the entire month of June. Be warned.

Singal slammed an article from LifeSiteNews about women who regretted their transgender surgeries as “disingenous.” Nevertheless, his lengthy essay provides important perspectives for parents who dread that one of their children will one day inform them that he is really a boy or she is really a girl.

Although Singal is convinced that some adolescents do profit from gender reassignment treatment, he also underscores that others live to regret them. Some children, after thoughtful counselling by parents or therapists, come to lose their desire for treatment before insisting on the drastic step.

One of his interview subjects is a 14-year-old girl who, as a 12-year-old, became fascinated with YouTube videos by “transgender” youths like the male-to-”female” Miles McKenna, who had gone on testosterone and had a double mastectomy. Uncomfortable in the onset of puberty, “Claire” (not her real name) thought she had found the answer to her depression.

Despite online resources that told them that if their daughter said she was trans, she was trans, Claire’s parents weren’t convinced. Lovingly supporting their daughter by spending more time with her — and forbidding her from internet searches — Claire’s parents, “Heather” and “Mike,” rode out the storm. Eventually, Clare realized that her unhappiness was not caused by her having been “born in the wrong body.”

“Heather thinks that if she and Mike had heeded the information they found online, Claire would have started a physical transition and regretted it later,” Singal wrote.

Claire was lucky. Other women Singal interviewed had been successful in convincing their parents to allow them to take hormones and have double mastectomies. Max Robinson first learned the concept of transgenderism in the ninth grade, when she saw a “trans porn star” on an American talk show. Her experiences of being a girl had not been overwhelmingly positive — Max first had sex at 13 with an 18-year-old boyfriend — and transitioning to male seemed like a solution to her depression. “Despite the fact that she was a minor for much of the process,” Singal wrote, “her doctors more or less did as she told them.”

Singal underscores the challenges for parents by asking “Where’s the line between not ‘feeling’ like a girl because society makes it difficult to be a girl and needing hormones to alleviate dysphoria that otherwise won’t go away?”

Without rejecting the idea that girls can become “men” and boys “women,” Singal interviews therapists that advise more caution than is currently fashionable. A gender reassignment counselor told the journalist that, whereas 10 years ago, she had to justify giving puberty-blocking mediation to teens at all, now she has to defend doing any kind of psychological evaluation before proceeding:

“People (in 2007) … thought the four-hour evaluations I was doing were, too — how could that possibly be enough to decide whether to go forward with the medical intervention?” psychologist Laura Edwards-Leeper told Singal. “… (N)ow the questions I get are, ‘Why do you make people go through any kind of evaluation?’ And ‘Why does mental health need to be involved in this?’ And ‘We should just listen to what the kids say and listen to what the adolescents say and basically just treat them like adults.’”

Singal isn’t sure that children should be treated like adults when it comes to life-altering hormone treatments and surgeries. He also doesn’t think parents should be frightened into compliance by warnings that their children will commit suicide if they don’t receive puberty-blockers. Singal points out that just having a doctor or mental health professional tell a “trans youth” that he is taking him seriously and will listen to his story makes a depressed teen feel better.

Singal also observes that “social contagion” may be having an influence on the skyrocketing numbers of teenagers claiming they are transgender. Edwards-Leeper told Singal that her teen clients “talk openly about peer influence, saying things like Oh, Steve is really trans, but Rachel is just doing it for attention.” Another of Singal’s young interview subjects, Delta, told him that in 2013 a “wave of gender-identity experimentation hit her social circle… Suddenly, it seemed, no one was cisgender (had the sex he/she was born with) anymore.”

Although he is decidedly in favor of transgender therapies and surgeries for some teens, Singal’s article questions the idea that any child who wants them should get them. That, apparently, is what has brought down transgender wrath upon his head.

During Pride month, no less.