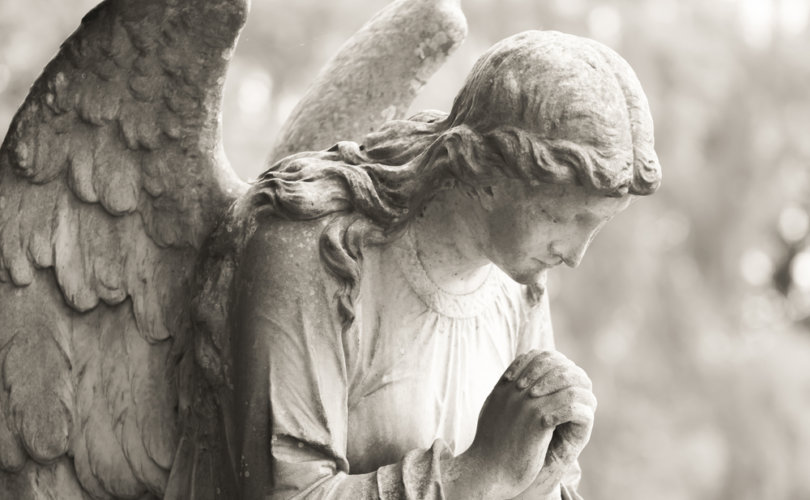 At the end of this, the first stanza of the Catholic Church’s Sequence for the Mass for the Dead, they went back to the beginning, and repeated it. I don’t think the production had any particular Catholic theme; the singing simply evoked a powerful atmosphere.

The chants of the traditional Mass for the Dead, called by the first word of the Mass proper, Requiem, include some of the Church’s most ancient, solemn, and moving. They express the seriousness, the gravity of death, and seek God’s mercy for those who have died. It was shocking to many when the Dies Irae and other chants were removed from the Mass for the Dead in the liturgical reform that followed the Second Vatican Council. Annibale Bugnini explained the reasoning of the reformers as follows (The Reform of the Liturgy p. 773):

They got rid of texts that smacked of a negative spirituality inherited from the Middle Ages. Thus they removed such familiar and even beloved texts as the Libera me, Domine, the Dies irae, and others that overemphasized judgment, fear, and despair. These they replaced with texts urging Christian hope and giving more effective expression to faith in the resurrection.

The idea that the texts at issue “overemphasize” “despair” (how much should despair be emphasized, one wonders?) is a gross mischaracterization. The texts of the ancient Mass for the Dead speak of God’s mercy and the gift of salvation, in the context of human guilt and God’s justice.

But the meaning of the words is only one aspect of the listener’s experience of these chants. Gregorian Chant is remarkable for expressing emotion without manipulating the hearer: it doesn’t twang on the heartstrings with euphoric or lacrimose cords, but expresses joy and sorrow in a way at once authentic, dignified, and restrained. Equally striking, with the chants for the dead, is their powerfully insistent tone, especially evident in the Dies irae. There is no need to speak at length about despair, but there is need to spend time begging God’s mercy, because God is pleased to grant it at our insistence, if we insist with a confidence that does not tip over into presumption.

The beauty and power of this particular chant is attested by the astonishing influence it has had on Western music: allusions to it are found in classical and above all in film music. What has endeared it to generations of the bereaved is that it takes the seriousness of death seriously, and in this way accompanies those who feel grief, in their grief. The bereaved do not want to be told that their feelings are inappropriate, and they are not: grief is the appropriate response to the death of a loved one because death is a serious thing, both for its effects on the bereaved, of separation from the loved one, and for its effect on the person who has died, who faces judgment. Here the Church truly meets people “where they are.”

Whatever the official explanation of the reform, Catholic funerals today all too often refuse to take death seriously. This refusal is not, in fact, the consequence of a true confidence in the afterlife, but is more often a concession to a worldly desire not to confront something that is too frightening, something it desperately wants to control and tidy away out of sight.

This concession to modernity is aided by a theological fashion for confusing the natural and the supernatural. Dietrich von Hildebrand explained it this way:

To overcome death with Christian hope, one must acknowledge the seriousness of death itself.