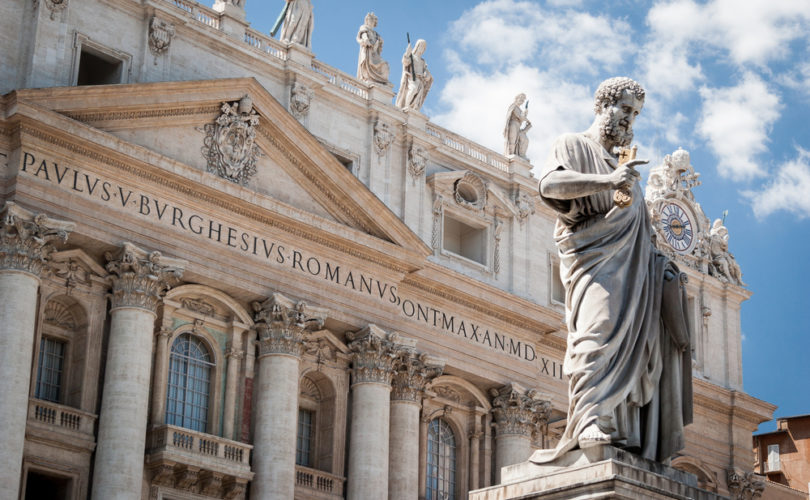 October 2, 2018 (LifeSiteNews) – “Do you not know,” says Saint Paul, “that we shall judge angels?”  Therefore we are within our rights to judge a mere man’s actions, setting aside any presumption that we know for certain what is in his heart.  Not only may we do so.  We must.  Public order demands it, and justice, and that part of charity, requiring the tact of a surgeon, which concerns the correction of sinners.

I have been reading, for one of our humanities courses at Thomas More College, the decrees of the Council of Trent, and what leaps to my attention, aside from the canons regarding the sacraments and other points of faith, is that reform of the Church could only come about by means of many acts of prudential judgment.  Sometimes these were gentle, and sometimes severe, but the alternative was that every bishop, priest, cleric, and layman should do what seemed best in his own eyes – to use the quiet and terrible words that end the book of Judges.

The council fathers commanded these judgments everywhere and for all kinds of purposes, from choosing which boys might be admitted to minor orders, to choosing which men should be elevated to the episcopacy, to admonishing bishops to be frugal and not ostentatious in their dress and board, to using discretion when declaring that stubborn and public sinners had torn themselves out of the life of the Church.

The lives of clerics are especially to be clean, because if bishops condone men “given to evil and corrupt morals, how shall they reprove the lay people for their transgressions when these can by one word repulse them for permitting clerics to be worse than they?” (Fourteenth session, November 25, 1551).  “No one shall be chosen to govern cathedral churches unless he is born of lawful wedlock, is of mature age, is known for his integrity of morals, and possesses the required knowledge” (Seventh session, March 3, 1547).  “There is nothing that leads others to piety and to the service of God more than the life and example of those who have dedicated themselves to the divine ministry.  For since they are observed to be raised from the things of this world to a higher position, others fix their eyes upon them as upon a mirror, and derive from them what they are to imitate” (Twenty-second session, September 16, 1562).

Two things occur to me, with great pain, as I read these commands and warnings.  The first is that the Church has evidently behaved, not with the cramped caution of a prude, but with the carelessness of a profligate, a squanderer of both moral and monetary capital.  Suppose you are in charge of a man’s investments, and you find that one of your factors has been skimming profits for himself.  You call him in, and he confesses, and you forgive him.  You keep him in lesser employment.  You do not wish to ruin him.  As far as your own trust was betrayed, you have forgotten the matter; it never happened.  But you are the protector of someone else’s trust, and you have no right to take chances with that.  Your prudence will also protect the sinner by shielding him from responsibilities that have proved too much for him before.  You forgive the alcoholic for his drunken binge.  You do him no favor if you then put him in charge of your wine cellar.  You would be much to blame if you put him in charge of someone else’s wine cellar.

You would not be pretending to know the man’s heart.  You cannot judge what temptations he suffers, and what invisible triumphs he may have won, despite his quite visible failures.  But as far as your responsibility is concerned, those are neither here nor there.  You must be as wise as a serpent, though as innocent as a dove.  You are not permitted to presume upon God’s prerogative.  You have no right to suppose that God has performed the miracle of a complete transformation of the man’s life.  Even the apostles were justly wary of Paul, and how often does Christ strike the sinner blind and speak to him directly?

How much less, then, are you permitted to wink at his evil, to judge it leniently because you do not take the deed seriously enough; in which case you would be as wise as a pigeon, and as innocent as a snake.  And as for those who are soft in discipline because they themselves are guilty of the crime, or who are so far gone in corruption that they have persuaded themselves that the evil is no evil at all, or even a good – they are judges who ought themselves to be whipped, as Saint Jude says, for the saving of their own souls.

The second thing that occurs to me is that we are habitual judges, and the only question is whether we will judge justly and mercifully, remembering how frail we are, “for in the course of justice,” says Portia, “none of us should see salvation.”  But in this time we are mad, quite mad.  We are not instructed in the judgments of God, whether we derive them directly from Scripture or mediated through the catechism of the Church, and so we take our bearings from the herd.  There is no logic to it, and little reality.

You cannot hold back the river of human judgment.  It will flow.  If you narrow its range, it will be all the more furious and destructive where it does strike.  So are our current judgments of sexual sin.  Objectively, one divorce is a far greater plague than are the groping hands of a dozen licentious sots.  Its effects last a lifetime.  It severs a holy bond.  It violates an oath made before God and man.  It pitches children into chaos.  Yet divorce is popular, and the groping (now) is not.  Objectively, the sodomy that is now celebrated and held forth to young and vulnerable boys is far more destructive, physically and morally, than is a wolf whistle or a lewd remark.  We are led here and there not by reason but by the jitters of the mass phenomena, and like a herd when it is roused, we stampede, and trample everything in our path.

The herd, and the irresponsible bishop, are alike in this regard.  They do not examine their consciences.  I do not know how a good bishop can bear the weight of it, when he knows that upon every one of his decisions may hang the fate of a human soul.  The herd has no conscience to examine.  Think of the Two Minutes’ Hate in Orwell’s Nineteen Eighty-Four.  Think of the Orgy-Porgy in Huxley’s Brave New World.  Do not suppose that a herd is less destructive if the individual beasts that make it up are intelligent.  Brains make it far more dangerous, and more various in its evil.  Do not suppose that a herd is less destructive if the beasts are of both sexes and all classes.  Then there will be no rank of still rational creatures standing apart from it and retaining some power to check it or to mitigate its harm.  Mass media are adrenalin to the stampeders.  “Education,” such as it is, arms the herd with tusks and horns and fangs.

Why do we suppose that if we had been alive in Germany in 1930, we would have resisted the rampant and popular evil in our midst?  That would have required acts of calm, clear, cold judgment.  Do not doubt for a moment that such judges were reviled and ridiculed.  Their friends turned a cold shoulder to them.  Their families grew alien.  They taught the alphabet in a poor village kindergarten rather than Latin at a university.  Their very pastors looked aside when they approached.  How easy it is to pretend to judge the hearts of others!  For Other People’s Sins are always worse than mine.  But how hard it is to make right judgments, when all the herd is storming in the other direction!

But in our time maybe it is not so hard, after all, because we have seen the slaughterhouse into which the herd has so heedlessly marched.  The ground is slick with its blood.  The smoke of the concentration camps is in our nostrils.  Mercy Lewis and Mary Warren are raving, and Giles Corey has been pressed to death with stones.  Not one organ of the body politic is healthy.  Now of all times, if we cannot get bishops with true charity, we could use a few at least to be moved by the old pagan greatness of soul; men who could say, as they lay dying, “I found my diocese a bog not fit for pigs, and I left it a garden.”