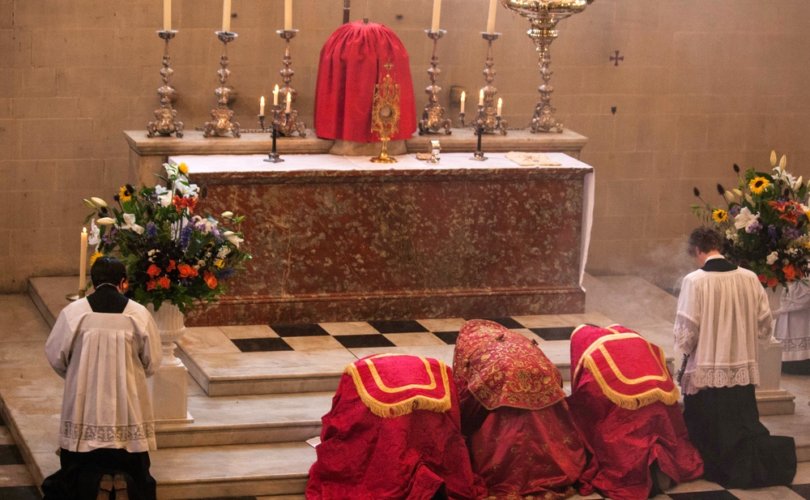 June 16, 2020 (LifeSiteNews) — On last Thursday’s feast of Corpus Christi, I wrote about the urgency of keeping churches open and how good it is for the faithful to make regular visits to the Blessed Sacrament.

Historically and currently, there are two basic forms of Eucharistic adoration in the Catholic Church.

First, there is what might be called simple adoration, which is when the faithful adore the Lord really, truly, substantially present in the Most Holy Sacrament, in the ciborium reserved in the tabernacle. If the presence of the faithful can be assured, the doors of the tabernacle may be left open, or the ciborium removed and placed on a corporal on the altar. In this scenario, the ciborium itself should be covered with a veil. (Sometimes people refer to this as simple exposition.)

Second, there is solemn adoration or (solemn) exposition of the Blessed Sacrament, when a large host is placed within a glass “lunette” and this, in turn, is fitted into a monstrance, usually made of gold or silver. At least six candles are placed around the monstrance and kept burning for the duration of exposition. Such exposition can be done at any time when the faithful will be guaranteed to be present (the monstrance may never be left unattended), but it is especially fitting to do so on the Feast of Corpus Christi, during the octave of Corpus Christi, and on other great feasts of the Church’s liturgical year.

Whenever we enter into the nave of a Catholic church, we should immediately genuflect toward the Blessed Sacrament. Happily, the tabernacle is often on or behind the main altar, so that our genuflection becomes a simultaneous reverencing of the Lord’s Real Presence and an acknowledgment of the altar, the greatest (mere) symbol of Christ in the Church. If the tabernacle happens to be located somewhere else than the main altar, however, we should not genuflect towards the altar but rather toward the tabernacle.

(In the local parish church where I went to Mass growing up, a renovation in the 1970s had destroyed the integrity of the building by tearing out the high altar, rebuilding the nave “in the round,” and putting the tabernacle off to the side, in the midst of a bunch of padded chairs for overflow seating. I never got to experience the original form of the church — although I saw it once in a heartbreaking black and white photograph, and I remember my parents saying that they couldn’t understand why it had been done. Thinking back on my childhood, I cringe to think of how many irreverences were committed for the simple reason that the tabernacle was absolutely in the wrong place and was basically ignored by all. In a “sign of the times,” this church has recently been renovated yet again and restored to a more Catholic layout. A history like this inevitably prompts the question: Why did so much money have to be wasted to wreck a lovely Gothic church, and then more money spent to restore it to something that didn’t even equal its former glory?)

Traditionally, the genuflection toward the tabernacle should be on to the right knee. For simple exposition, too, it is sufficient to genuflect on one knee like this. During liturgies, ministers also go down on the right knee whenever they genuflect, even towards a presiding prelate. Some people follow the custom of using the left knee when kneeling before a bishop or a cardinal to kiss his ring, or before a priest to receive a blessing; this is neither to be enjoined nor scorned. What is important is to understand the difference in symbolism: we kneel before the Blessed Sacrament in adoration or latria directed to God, whereas we kneel before a successor of the Apostles to give honor (but not adoration) to one who represents Christ to us.

At solemn exposition, however, a special custom of veneration has obtained for a long time. The believer is to fall upon both of his knees and make a profound bow toward the floor, even to the point of touching the floor with his head.

In the desacralizing tendencies of the 1970s, an attempt was made to do away with this special form of genuflection. It seems that people were strangely embarrassed about humbling themselves before God. The words of the Lord must have vanished from their minds: “For he that shall be ashamed of me and of my words, of him the Son of man shall be ashamed, when he shall come in his majesty, and that of his Father, and of the holy angels” (Lk. 9:26). Thus, in the 1973 document Holy Communion and the Worship of the Eucharist Outside Mass, we read: “A single genuflection is made in the presence of the Blessed Sacrament, whether reserved in the tabernacle or exposed for public adoration [Coram sanctissimi Sacramento, sive in tabernaculo asservato sive publicae adorationi exposito, unico genu flectitur]” (n. 84).

Fr. Edward McNamara, a conservative-leaning liturgist at Regina Apostolorum and a long-time ZENIT correspondent, attempts to defend this modern reductionism:

Since a genuflection is, per se, an act of adoration, the general liturgical norms no longer make any distinction between the mode of adoring Christ reserved in the tabernacle or exposed upon the altar. The simple single genuflection on one knee may be used in all cases. However, some bishops’ conferences have voted to retain the use of the double genuflection for the Blessed Sacrament exposed, and it would be required in these countries. In this case, those who make the double genuflection kneel briefly on both knees and reverently incline the head with hands joined. Needless to say, the simple genuflection should never be reduced to a sudden spasm in the right knee. The right knee should touch the place where the right foot stood while head and back remain straight. The gesture of adoration should be performed with due pause. When I was young a wise priest taught me to recite the invocation “My Jesus, I adore you in the sacrament of your love” so as to gauge a reasonable time to remain knee to floor. One could stay longer perhaps, but it is a fairly safe rule of thumb.

With all due respect for Fr. McNamara, this sounds like trying to make lemonade out of especially sour lemons, without sugar.

The custom of a double genuflection before the monstrance arose for good reason. Solemn exposition allows us the privilege of a certain physical nearness to the Lord who is truly present beneath the veil of the lowly appearance of bread. The nearness is less than that of Holy Communion, but it prompts us to make acts of faith, trust, and adoration that prepare us better to receive Jesus in Communion. Put it this way: as your heart expands, so does your capacity to receive all that He will give.

The difference between the Eucharist in the tabernacle and the Eucharist in the monstrance does not have to do with the personal presence of the Lord, for He is fully present whether the Sacrament is exposed to our gaze or hidden. The difference is one of mode or manner: out of sight, safeguarded, reserved, versus placed under our gaze, available to our senses, honored publicly with the guaranteed presence of someone praying. When exposed in the monstrance, the Lord is the hidden God among us in the visible sign of life-giving Bread.

It is this obvious and significant difference in mode that justifies and calls for the double genuflection.  Think of the difference between the pope in his private rooms and the pope in a general audience, or the difference between how we think of a church across town compared with how we act as we pass a church or go within it. The way in which a reality is present to us, the proximity of the sign itself, also matters, not just the reality that is present; both demand their due.

The attitude we should have before the Holy Eucharist — the attitude so well captured in the double genuflection with one’s head placed against the earth in homage — is described with incomparable vividness by Mother Mectilde of the Blessed Sacrament (1614–1698):

When we are before the Most Holy Sacrament, we must not be content merely to adore Him with lip-service; we need to lower ourselves into a profound emptying out of self, and recognize that we are nothing, that we are less than nothing and, in this disposition, offer to the spotless Lamb who immolates Himself for the salvation of the world not only a sacrifice of adoration and of thanksgiving, but again a sacrifice of submission, of abandonment, and of consecration. Let us adhere to His divine will, detach ourselves from creatures, and renounce all human consolation, so as to life in Jesus only, and only for Jesus. (Mystery of Incomprehensible Love, p. 21)