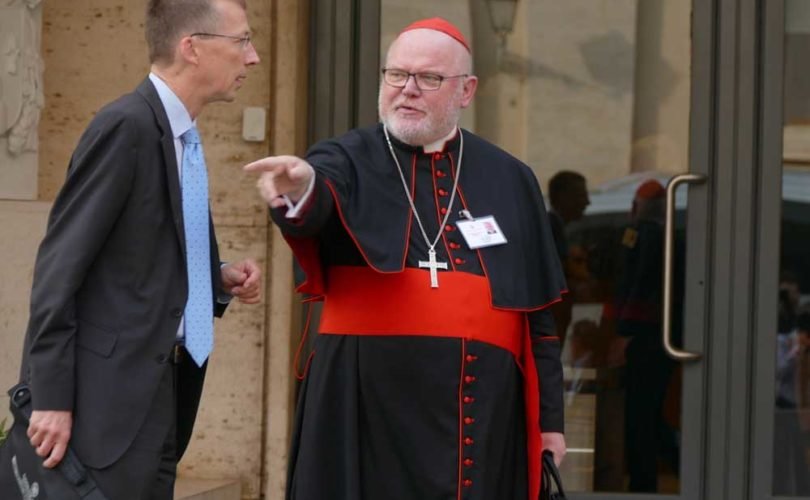 March 22, 2019 (LifeSiteNews) — When asked what he thought about Western civilization, the Indian independence campaigner Gandhi is supposed to have replied, “I think it would be a good idea.” A similar witticism might seem appropriate when considering priests engaged in sexual abuse and celibacy. Celibacy: It would be a good idea.

Cardinal Marx takes a different view. During last October’s Youth Synod, he seemed disappointed that the subject was not discussed. LifeSiteNews reported him as saying that, although “celibacy is not the cause for abuse,” the stresses of unmarried life might be a factor. Now he has arranged for it to be discussed by a synod of the German bishops, saying “sexual freedom” is intrinsic to the “inner freedom of faith and orientation to the example of Jesus Christ” and that celibacy might not be “realistic” for all priests.

It sounds as though Cardinal Marx is preparing to dismiss celibacy, even while paying lip service to its value as an “expression of religious commitment to God.”

It has become tedious to point out that a theoretical commitment to celibacy is not a common factor among sexual predators. Scout leaders, schoolteachers, sports coaches, non-Catholic religious ministers, and people involved in the entertainment industry all have come to grief over the sexual abuse of either minors or adults. What abusers have in common are three things: the opportunity (access to the target of choice), some degree of power over victims to discourage them from resisting or reporting the abuser, and a broken moral compass.

Harvey Weinstein abused women not because he lacked alternative sexual outlets. Sports coaches are not prevented from getting married. Nor has anyone seriously proposed that Catholic priests as a group are more likely to offend than others.

The problem is that for many people, the connection between the ideal of celibacy and abuse is obvious. Surely, they say, men who have no legitimate sexual outlets are more likely to find illegitimate ones. Again, those predisposed to abuse children may be present in larger numbers in a group of people who are asked to forgo marriage.

The obviousness of these ideas stems from their place in the sexual theories of Sigmund Freud, which have seeped into our assumptions over more than a century, without ever having established themselves scientifically. Freud’s critics have never been wanting, and today his theories are decidedly old hat. But as can happen, the views of a discredited theorist can appear to be common sense to people with little knowledge of the field.

The trouble is that there is simply no evidence for the claim that pornography helps sex-offenders. Indeed, the evidence is quite the other way. A 2015 academic review of the research literature on the subject observes:

Freud was simply wrong — not that we can expect any apologies from his followers any time soon.

On the contrary, it is remarkable how disinclined they are to learn from their mistakes. In the early 1970s, the American bishops commissioned a report into the psychological well-being of their priests by the psychiatrist Eugene Kennedy. Kennedy did not investigate priests’ spiritual practices, or sexual orientation or activities, but nevertheless felt emboldened to tell the bishops that priests needed more freedom. “There is little indication that American priests would exercise freedom in any impulsive or destructive way.”

This, with hindsight, was a moment of escalating sexual abuse and cover-up by priests; even at the time, the collapse of priestly spirituality, with many seeking release from their vows, was causing grave concern. But the Freudian has only one answer to any problem: just let it all hang out.

Cardinal Marx clings to the idea that “sexual freedom” is the answer to the problem of priests taking sexual liberties, but there is no lack of other avenues to explore. Is there a degree of spiritual slackness among many priests? Do priests commonly neglect to say a daily Mass, or to pray the Liturgy of the Hours? Do we hear of priests too busy to hear confessions? Is their self-identity as priests such that they prefer not to wear clerical clothing?

Whatever Cardinal Marx may think, we need priests to do what teachers, scout leaders, and others have failed to do: to defy the anything-goes attitude toward sexuality and live out a counter-cultural life with the help of supernatural virtue. Celibacy, which identifies priests with Christ in a self-sacrificial way, is part of the solution, not part of the problem.