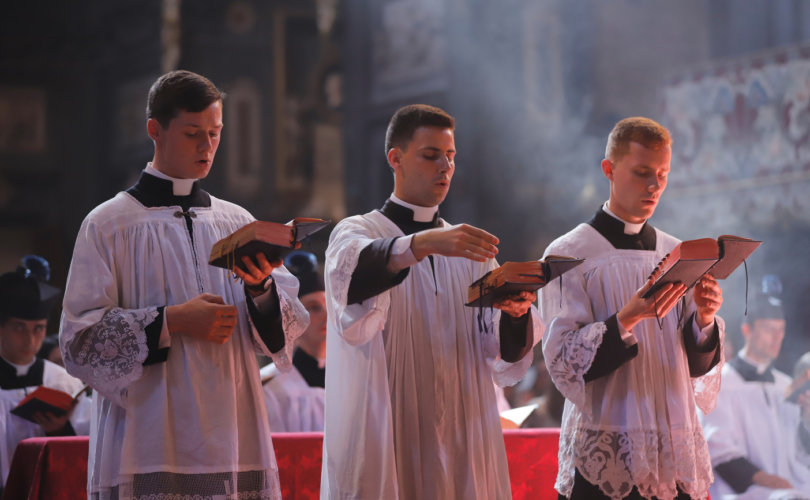 November 21, 2019 (LifeSiteNews) — Few documents have had so lasting an impact on the cultivation of sacred music as did Pius X’s motu proprio Tra le Sollecitudini, promulgated on November 22, 1903, the Feast of St. Cecilia, patroness of musicians.

The pope’s purpose in writing this motu proprio was to set in motion a general reform of sacred music in the life of the Church. His notion of reform was never to jettison the past and usher in novelties (as would appear to be the notion entertained by many Catholics over the last fifty years), but rather to return resolutely to the wellsprings of Tradition and to let the rushing flow of that clean water clear away the debris that had gathered in decadent periods.

By decadent, Pius X did not have in mind the Middle Ages, the glorious era of Christendom, which postwar liturgists generally regarded as a falling away from the homely simplicity of early Christians. As Pius XII was to state 44 years later in Mediator Dei, the Holy Spirit stirs up liturgical developments in each age as further ways to sanctify the people of God. These developments stand in a continuous line, so that what comes about in a later century builds upon and elaborates what is already present in nucleo. For example, the switch from a kind of Communion in the hand in ancient times — not the way it is practiced today, as Bishop Schneider carefully shows in Dominus Est and Christus Vincit — to Communion on the tongue was an organic development that flowed out of the very reverence and adoration toward the Eucharist that had already been present and was growing under the influence of the Holy Spirit.

Corruptions are also possible, when a new feature or practice contradicts the letter or spirit of what is already in place. Thus, to take up the same example, the reintroduction of Communion in the hand was a clear corruption, not a development or a restoration. More to the point, the introduction of ornately operatic styles of music into the Mass during the classical and romantic periods was a corruption because it turned the liturgy into a concert and detracted from its otherworldly orientation. This was the view of St. Pius X: though doubtless an admirer of the music of Haydn, Mozart, and Italian composers on its own terms, he judged their style poorly suited to the temple of God and the holy mysteries enacted therein. As Tra le Sollecitudini explains, God had already generously provided an intensely contemplative music for the liturgy of the Roman Rite — namely, Gregorian chant, a music that grew up organically with this rite, has always adorned it, and sets the tone of all sacred music fit for use in the temple of God.

Pius X’s teaching decisively shaped the subsequent Magisterium, from his successors Pius XI and Pius XII through the Second Vatican Council’s Constitution on the Sacred Liturgy Sacrosanctum Concilium down to Benedict XVI’s apostolic exhortation Sacramentum Caritatis. In all of these documents we find an unqualified recognition of the primacy of Gregorian chant for the Roman rite, even though there is also a welcoming of musical compositions in other styles, as long as they harmonize with the liturgical action — which, unfortunately, cannot be said to be true for most of what passes for “church music” nowadays, as I have discussed in other articles here and elsewhere.

The noble vision of Pius X is not unrealistic or unachievable. Throughout the first half of the twentieth century and well into the 1960s, schools all over the world were teaching children to sing chant, priests chanted the High Mass (even if Low Mass was more popular), and religious communities chanted their Divine Office. Chant was such a prominent marker of Catholicism that Hollywood could instantly create “Catholic atmosphere” with a few seconds of chant. It may come as a surprise to know that Thomas Merton, who became so controversial later for his political involvement and interreligious activities, was staunchly opposed to the abandonment of Latin and chant. As he wrote in 1964 to Dom Ignace Gillet, abbot general of the Cistercians of the Strict Observance:

This is what I think about the Latin and the chant: they are masterpieces, which offer us an irreplaceable monastic and Christian experience. They have a force, an energy, a depth without equal. All the proposed English offices are very much impoverished in comparison — besides, it is not at all impossible to make such things [Latin and chant] understood and appreciated. Generally I succeed quite well in this, in the novitiate, with some exceptions, naturally, who did not understand well. But I must add something more serious. As you know, I have many friends in the world who are artists, poets, authors, editors, etc. Now they are well able to appreciate our chant and even our Latin. But they are all, without exception, scandalized and grieved when I tell them that probably this Office, this Mass will no longer be here in ten years. And that is the worst. The monks cannot understand this treasure they possess, and they throw it out to look for something else, when secular people, who for the most part are not even Christians, are able to love this incomparable art.

The difficulty rather came from a false notion of “updating” or modernization — the view, which grew slowly in influence and finally dominated the liturgical reform and its implementation, that older prayer forms and modes of art are foreign to modern people, alienating, excessively demanding, a temptation to elitism and escapism. But such a negative judgment does not appear to have been common among most Catholics, who did not ask for their cultural heritage to be taken away from them, nor is it the experience of Catholics today who rediscover these things and appreciate their beauty and appropriateness, like the thoughtful “secular people” Merton talks about.

Gregorian chant has never been more available for those who seek it. All the old liturgical books of chant have been republished; all the Solesmes books for the Ordinary Form are still in print; new resources like The Parish Book of Chant are plentiful; most chants can be listened to online or printed off at one click; free tutorials can guide self-study, and well attended workshops happen year in, year out. This great treasure of liturgical music will not go away; it will rise again from the ashes, as the Church recovers the sacredness of her worship.

Although there are hopeful signs that Catholic liturgical music, after decades of lucrative secularization and horizontal banality, is beginning to experience a true renewal in continuity with the Church’s tradition, the way the music is done at most parishes indicates that we are still far from a universal implementation of the sound principles of St. Pius X. The primary characteristic of modernity, according to many scholars, is its “deep pluralism,” and that mentality seems to obtain among Catholics in their liturgical worship: “all we like sheep have gone astray, every one to his own way.” May the combined prayers of St. Cecilia and St. Pius X move us to venerate once again “the musical icon of Roman Catholicism” (Joseph Swain), for the glory of God and the sanctification of souls.