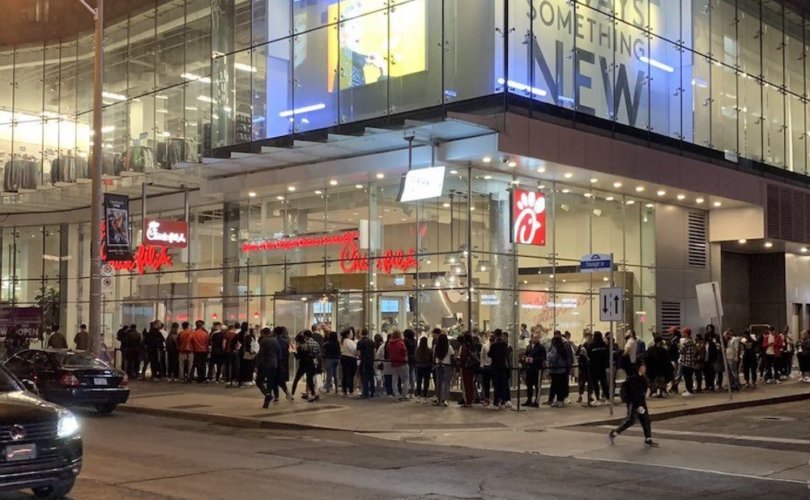 TORONTO, September 18, 2019 (LifeSiteNews) ― I may live in Scotland, but I’m Toronto born and bred, which is why an editorial about an American fried chicken giant setting up shop in Hogtown caught my eye.

“Chick-fil-A is ideologically opposed to my existence” screamed the headline, and so I immediately clicked to see why the same-sex attracted 43-year-old author thought so. Was it because the Christian company wished to wipe him off the face of the earth?

No. It was because Chick-fil-A’s Christian founder “publicly opposed same-sex marriage” and because company profits are donated to charities Wheeler believes “oppress and marginalize queer people, especially queer youth.”

Wheeler didn’t name them, but a quick Google search reveals that the charities Chick-Fil-A supports despite their LGBT critics are the Fellowship of Christian Athletes and the Salvation Army. Really — Christian jocks and the Sally Ann. I could not have guessed that from Wheeler’s tones of horror and dismay.

The author moved swiftly from Chick-fil-A’s donations to the suffering of young people who experience same-sex attractions, who Wheeler says are “unusually vulnerable to depression and suicidal thoughts.”

This is not because they’re “queer,” he believes, but because the “the stigmatization of queerness by family, church, and society has left them lonely and ostracized. They’re miserable because people will not accept and love them, and because the people they should be able to turn to are often the most likely to harass, harm, and abuse them.”

It was never adequately explained how this is Chick-Fil-A’s fault.

I don’t doubt that any group of young people feel lonely and ostracized, or that they don’t feel accepted or loved, or that they are often harassed, harmed, and abused by their own family and so-called friends. I was a young person once — around the same time Wheeler himself was a young person — and I often felt lonely, ostracized, unaccepted, harassed and, if not harmed and abused, betrayed by friends and misunderstood by family.

As a Roman Catholic teenage pro-life activist in Toronto, I learned very quickly what ostracization really looks like. My new friends and I got screamed at and sworn at by other teens and adults on the street. We were often mocked for being Catholics, and we were subjected to torrents of blasphemies. Nevertheless, I never had suicidal thoughts, and it never occurred to me to be mortally offended and hurt because people around me gave money to pro-abortion charities like UNICEF or the United Way.

Why not? First, the Gospels had promised that people would hate Christians when they were faithful to Jesus Christ. To pick just one verse of many, in Matthew 10:22, Jesus says, “You will be hated by all because of my name, but whoever endures to the end will be saved.” Thus, being unpopular for Christian activism, although unpleasant, was not a surprise.

Then there was the example of the Lord Himself, often rejected and misunderstood during His ministry and unfairly nailed to the Cross. John 1:10 proclaims, “He was in the world, and the world came to be through Him, but the world did not know Him.”

Next there were also the martyrs, beginning with St. Stephen, and their wonderful stories  ― wonderful and inspiring in children’s books and rather more harrowing in Butler’s Lives of the Saints.

There were also the bravest among us, like one teenage girl named Adele, an unsung 1980s forerunner to Toronto’s Mary Wagner, who got thrown into prison again and again, usually for just praying her rosary outside Toronto’s notorious Morgentaler abortuary.

And ultimately there were the unborn being killed and their mothers being scarred inside the clinics we stood outside. Whatever we were suffering was nothing to what they were suffering, and we knew it.

Those of us who learned to live with being so intensely unliked persevered in our activism and our Catholicism, and as an adult I have often been struck by how thinned skinned LGBT activists are compared with pro-life youth and faithful old ladies.

Whereas most adults don’t seem to care if other adults don’t like them, LGBT activists hyperventilate at the very idea that somebody somewhere does not celebrate their sexual feelings and choices. This lack of participation is inevitably characterized by LGBT activists as “hatred” when it is nothing of the sort. When it isn’t sorrow or disgust, it’s simple indifference.  And I’m afraid this inability to accept non-participation has reached its nadir in Wheeler’s horror that some of his fellow Torontonians queue up to eat Chick-fil-A chicken.

The LGBT author even believes he can read their minds.

“Of course, people are not just going to Chick-fil-A to eat fried chicken,” he wrote.

“They’re eating fried chicken spitefully. They’re defiantly standing in line with all the other freethinkers because they’ve been asked not to,” he continued.

“They know that going to Chick-fil-A hurts queer people, but they’ve never thought much about queer people before and they’re not going to start now. It’s a strange form of identity politics where the identity is ‘a–hole.’ The line to get into Chick-fil-A is the a–hole pride parade.”

Putting the side the impossibility of not thinking about “queer people” in Toronto when its Pride Week gets longer every year, it seems mad to assume that people who go to Chick-fil-A to eat some famously tasty chicken do so out of spite. It also seems very uncomfortable ― and pointless.