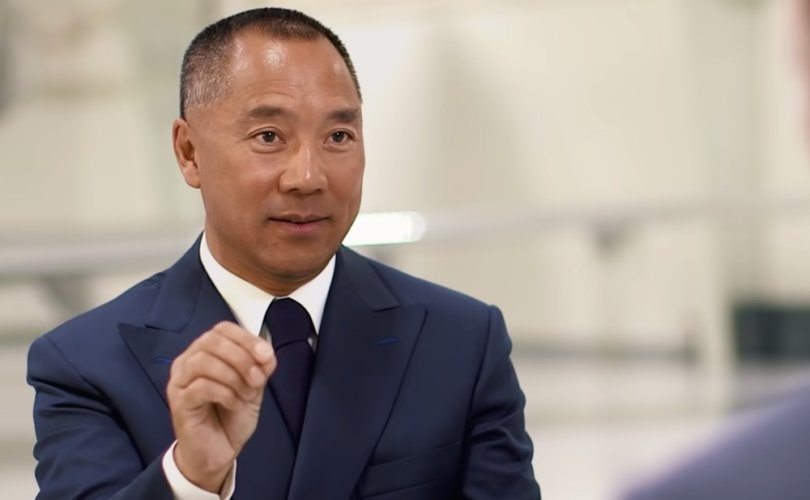 June 25, 2020 (LifeSiteNews) – Chinese dissident Guo Wengui claims that the Chinese Communist Party (CCP) “allocates up to $2 billion a year” to buy the Vatican's silence concerning the ongoing persecution of the Catholic Church in China and other human rights abuses.

Mr. Guo made the allegation — without offering any supporting evidence — in a June 20th interview on Steve Bannon's The War Room.  The explosive claim was made in the context of a larger discussion of how the CCP is spending huge sums of money to buy politicians, media, and influence in countries like Australia and Italy.

“2014, the CPC, inside, made the decision: Every year, they want 2 billion dollars to pay to the Vatican, to influence the Vatican policy about China/Vatican —  and [regarding] the Christian and Catholic [mistreatment], they wanted Vatican to shut up, to follow the CPC about religion, you know the policy – that’s disaster,” Guo said.

These expenditures, according to previous statements by Guo, are part of a larger strategy to achieve global hegemony that goes by the initials “BGY.” The initials “BGY” stand for Blue (control over the Internet), Gold (buying influence with money), and Yellow (seducing key people with sex).

Guo said Saturday that the CCP, in pursuit of hegemony, has been investing a fixed percentage of trade earnings with foreign countries into the BGY program since 2014. The goal is to compromise, co-opt, and control as many nation-states as possible, especially its key competitor the U.S.  To this end, he says, the BGY quota for the United States and other countries, which started at 1%, has been increased from 1% to 5% over the years.

So what do I, as a Sinologist, think about Guo's claims, especially where the Vatican is concerned?

Let me begin by offering a couple of cautions.  For a successful businessman — Mr. Guo was once one of China’s wealthiest men — he often plays fast and loose with the numbers.  Moreover, as someone who is now openly committed to the overthrow of the Chinese Communist regime, he always paints its actions in the darkest possible colors.

For example, Guo claims that “According to data from the U.S. Trade Office, the total trade volume between China and the U.S. in 2018 was $7.37 trillion.” If calculated according to 5%, Guo went on, the amount used for BGY in the United States would then be about $36.8 billion.

But according to the Office of the U.S. Trade Representative, U.S. goods and services trade with China actually totaled an estimated $737.1 billion in 2018. In other words, Guo’s numbers are inflated by a factor of ten. Instead of $7.37 trillion in trade, we are talking about $737 billion.  And 5% of this amount would in fact be $36.8 billion.

Given how far off Guo is on the numbers, can he still be believed?

I think so, and here’s why: It is all too easy to misplace a decimal point in translating numbers from Chinese into English.  The primary unit for expressing large numbers is Wan, which means ten thousand (10,000)–as in the expression Wan Sui, “May you live Ten Thousand years”–and Yi, which means 100,000,000. A “million” is “a hundred ten thousands,” while a “billion” is “ten one hundred millions.”  I’ve been speaking Chinese for a long time, and I still have to check myself when translating numbers.

China is clearly throwing a lot of money around on the world stage in its drive for dominance, and there is little doubt that large numbers of elected and unelected officials around the world have been compromised in this way.  Bribes, kickbacks, sweetheart deals, investment “opportunities” such as the one Hunter Biden walked away with, are all occurring in real time.  They are all part and parcel of the United Front tactics that the CCP uses to infiltrate and control organizations and even entire countries.   There is no question that dictatorships have been bought and democracies undermined through these efforts.

I cannot exaggerate the sheer scale of this effort.  I am perhaps the most unlikely prospect for recruitment into this giant CCP scheme on the planet.  Yet even I, who has been a staunch critic of the CCP for forty years, have been approached by corrupt PRC operatives and offered free trips to China and other inducements.

Guo’s description of the BGY program of world domination thus sounds accurate to me.  Certainly, Beijing is attempting, largely through Huawei, to control the Internet (Blue) and to buy influence with money (Gold).  Not to mention that Chinese officials love to bandy about catchy acronyms like this one.

The dissident billionaire’s claim that a certain percentage of foreign trade earnings is dedicated to the advancement the BGY program also has the ring of truth.  This would be a simple way of ensuring that, the more important the market, the more money is spent on paving China’s drive towards dominance.

In fact, state-planned economies like China’s often rely on such simple numerical targets and quotas, not to mention that official policy decisions are necessarily broad brush, given how much power is concentrated in the hands of a tiny number of people.  How much time does Xi Jinping, or any of the other six members of the Standing Committee of the Politburo, have to devote to policy minutiae?

China is obviously spending much more on its influence operations than it used to, and the increase from 1 to 5 percent of foreign earnings that Guo claims has taken place dovetails neatly with this picture. To give just one example, many billions of dollars have been spent in the U.S. buying favor with American universities in recent years, money which in turn has facilitated the theft of massive amounts of U.S. intellectual property from those same institutions.

Guo may be off on the numbers, but he is, in my view, right on everything else, including the fact that the Vatican has been on the receiving end of donations from the Chinese Communist Party.  Indeed, the Vatican has acknowledged accepting such donations, at least in terms of medical supplies.

Would the CCP offer “contributions” to Vatican officials in return for their silence about the ongoing persecution of the Church in China, or even in exchange for the signing of the Sino-Vatican Agreement?  It would be surprising if they did not.  This is the way that the Party always behaves, both at home and abroad.

Are there Vatican officials who would have accepted such “contributions”? It would seem so, given some of the other shady transactions that have come to light in recent years.

Of course, the total amount of such contributions would not be $2 billion a year, as Guo mistakenly suggests, or even 10 percent of this amount, although $200 million a year would be a much easier amount of money to hide in the labyrinthine Vatican financial network.  Indeed, if there is a “5 percent rule”, it wouldn’t apply to the Vatican donations in any event, since there is zero trade between China and the Vatican.

Many have been surprised at the lengths to which the Vatican has been willing to go in its charm offensive with the CCP.  Two years ago, the chancellor of the Pontifical Academy of Social Sciences, the Argentinian Bishop Marcelo Sanchez Sorondo, astonished the Catholic world by suggesting that Communist China was the best exemplar of Catholic social teaching in today’s world.

And just this May, La Civiltà Cattolica, which enjoys semi-official Vatican status, has rolled out of a new Chinese edition. The editors of the Jesuit journal explained that the new edition is meant “as a gesture of friendship in the spirit of Matteo Ricci, given the increasingly important role that the Chinese language plays in the contemporary world within the global context.”

As for the Pope himself, he continues to wax eloquent about China.  “I would like to go to Beijing,” Pope Francis said last November in Asia. “I love China.”  He even insists that China’s communist government protects religious freedom and that “churches are full.”  (Chinese Catholics whose churches have been defaced, closed, or even razed to the ground may be surprised to learn this.)

Above all, there is the secret accord that the Vatican signed with Beijing in September 2018, which supposedly concerns the appointment of Catholic bishops in China and lays out a path for the normalization of relations.

Despite the lack of progress on either front, the Vatican appears set on extending the agreement. Given how badly it has worked out for Catholics in China, both in the Underground and in the official Church, it is hard to understand why this should be so.

Many Vatican-watchers, including John L. Allen, Jr., explain the Vatican’s continuing pandering to China as an attempt to woo Beijing into full diplomatic relations. “The Vatican is moving full-steam ahead in its courtship of Beijing, with the ultimate prize remaining full diplomatic relations, a secure legal standing for the church, and partnerships on the global stage,” Allen wrote.

But what if Beijing has other plans?

What if the Chinese Communists are merely using the lure of diplomatic relations, along with strategically placed donations, to buy the Vatican’s silence about the crushing of freedom in Hong Kong, the success of democracy in Taiwan and, most of all, the persecution of Catholic and other believers in China itself?  What if they simply want a free hand to set up a puppet church with a rewritten Bible that promotes “socialism with Chinese characteristics,” preached by a cowed clergy who feel abandoned by the Universal Church?

What if the masters of deceit who run China are simply buying time–literally buying, if Guo Wengui is correct – until their plans to transform the Chinese Catholic church into a de facto arm of the CCP reach fruition?

I wonder if Pope Francis, or anyone for that matter, has any inkling of how much in the way of “donations” various Vatican officials and institutions may have received from the Chinese Communist Party?

Where is Cardinal George Pell when you need him? The best way for the Vatican to rebut Guo Wengui's claims would be to bring outside auditors back in to do a respected audit.  This look at the books should, of course, include the Secretariat of State, the Vatican office that negotiated the Sino-Vatican agreement in the first place.