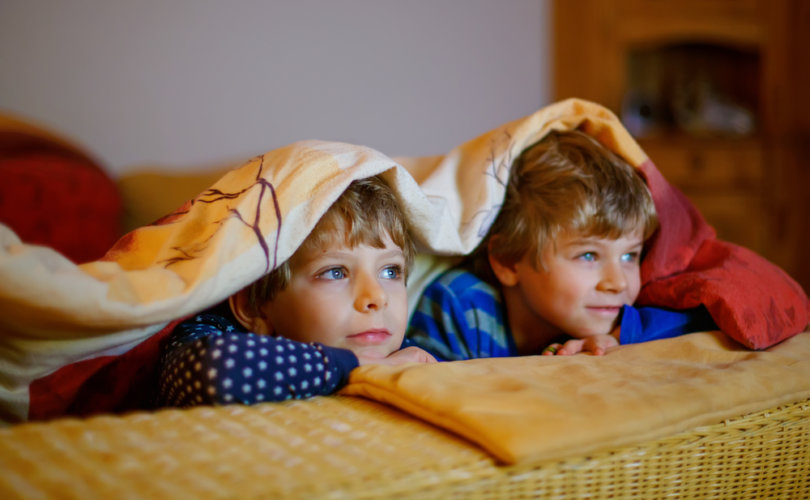 April 17, 2020 (LifeSiteNews) – As many of the COVID-19 lockdowns enter their second month and patience begins to run thin, some conservatives have taken to making wry, half-serious, silver lining observations. Hey, at least kids are home with their parents and Drag Queen Story hours are cancelled, is one common sentiment. And I get the drift: If churches are shut down, at least there is small solace in the fact that the sexual revolutionaries have been confined to their homes along with the rest of us.

But I do want to warn parents to be cautious. It is easy to think that with kids at home, they are more protected—after all, they’re not getting poisoned by public school sex-ed designed to confuse them about gender or being exposed to whatever our schools had planned for Pride Month. But keep in mind that the vast majority of children are first exposed to sexually explicit material by finding digital pornography on one of the innumerable devices that now litter our homes—and if parents are not vigilant, this time at home could be dangerous. (For those who don’t think this is a primary concern, check out the 23 reasons I gave in a column last month on why you should stay away from porn, ending with an interview with Kirsten Jenson of Protect Young Minds on how parents can porn-proof their homes.)

Once upon a time, parents could ignore what their children were watching in the knowledge that the culture would not work to actively thwart Christian values. Sesame Street didn’t feature cross-dressing LGBT activists and stuck to teaching the alphabet and simple virtues, and as one friend recently pointed out, Mr. Rogers’ Neighborhood, back in the 1960s, featured songs with lines such as “only boys can be the daddies and only girls can be the mommies.” We’ve come a long way from there to here.

It wasn’t so long ago that preachers like Jerry Falwell could be mercilessly mocked for claiming that one of the Teletubbies was gay. These days, you’d be crucified for suggesting there is anything wrong with featuring LGBT characters in children’s cartoons. In fact, it is downright trendy to use beloved children’s stories to teach children about the LGBT agenda. Disney, a company as recognizably American as Coca Cola, has been flirting with the LGBT movement for years, and this year finally came out with an animated Disney-Pixar film featuring an LGBT character—just as we all knew they eventually would. (The film bombed at the box office.)

It’s not just Disney, either. PBS’ famous Arthur cartoon series (which once featured Steven Crowder as the voice of The Brain) decided to have the teacher Mr. Ratburn come out as gay and marry his male partner in an episode titled “Mr. Ratburn and the Special Someone.” (There was an uproar after broadcasters in Alabama declined to televise the episode.) Despite some protest at this, PBS is doubling down, having decided earlier this year to reboot their Clifford the Big Red Dog series—but adding lesbian moms to the story to give children exposure to alternative family arrangements. A reboot of Cinderella will also feature a cross-dressing Billy Porter as the Fairy Godmother.

This is all to say that if parents wish to protect their children from the influences of the Sexual Revolution, they can take nothing for granted. Netflix is packed with shows for teens featuring LGBT material (not to mention extraordinarily pornographic and sexually violent content), but also features LGBT cartoon characters intended for children. LGBT content is becoming the norm in children’s entertainment, with USA Today reporting that the radical activist group GLAAD is often called in by networks to review children’s storylines. Parents who allow their children to watch the cartoon network on TV or surf the children’s section on Netflix are, whether they realize it or not, giving the LGBT movement access to the minds of their children.

Not so very long ago, it was possible to assume that the culture was not actively working to subvert the Christian worldview, especially as it pertains to sexuality. This is no longer the case. Parents cannot assume that their children will not be exposed to sexual themes and practices they morally oppose at an early age, even if they are keeping so-called “adult entertainment” or even entertainment created for teens away from them. The truth is that today, parents have to consciously opt out of nearly all of mainstream culture in the knowledge that much of the storytelling is designed to push a worldview directly hostile to the Christian faith.

Many parents do not realize this, but it is essential that we educate ourselves on this. I know many are tempted, as quarantine drags on, to put their children in front of screens and play kids’ cartoons or animated stories in order to get some household chores done or just distract them for a moment. But be very careful about which storytellers you are giving access to your children, and be aware of the fact that your children are growing up in a very different world than the one you grew up in.