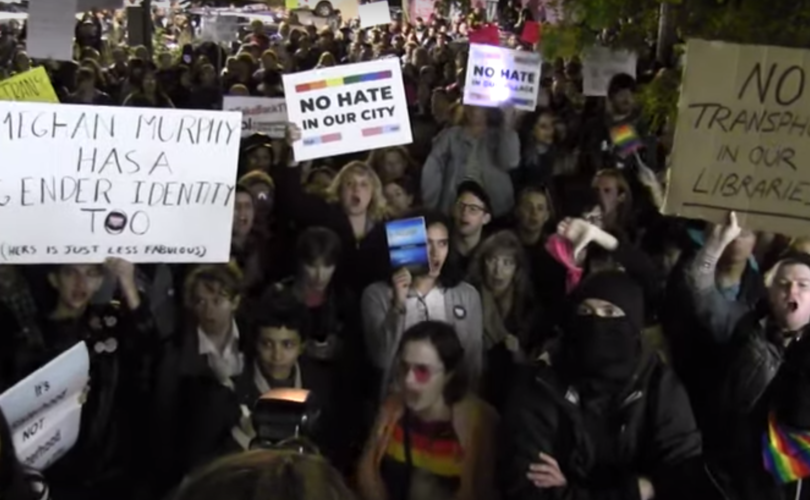 November 6, 2019 (LifeSiteNews) – Last week, I wrote a column on the public shaming of feminist Meghan Murphy. I noted that shouting crowd outside the Toronto Public Library made me nervous because of the sheer rage on the faces of those shouting for the head of a feminist woman who has been on board with every manifestation of the Sexual Revolution except the most recent one, the idea that biological men can become biological women.

I asked a question that I think we should consider seriously: If this is what these LGBT activists are willing to do to someone who is ideologically aligned with them on nearly everything, what will they be willing to do to us? Any thorough examination of that question should send chills down our spines.

I have more questions, as well. When I watched the video of the furious activists outside the library (one Meghan Murphy supporter was told to “go kill yourself, go bleed out and die”), I wondered: What stands between our Christian communities and that mob? What is standing between their legislative agenda, which includes condemning our beliefs as hate speech and removing our right to educate our children, and us? The courts? They have been overturning precedent and undermining religious liberty with great gusto these days (see Trinity Western University.) Political leaders? Don’t make me laugh. I doubt Doug Ford or Andrew Scheer even have the guts to say “There are only two genders” into a microphone (although I’d be happy to be proven wrong.)

As if to prove my point, only a few days after Murphy spoke at the Toronto Public Library, Toronto City Councillors voted 20 to 1 in support of reviewing the policies that govern who is permitted to have access to community spaces in Canada’s largest city, despite the fact that a similar review confirmed the current free speech policies scarcely two years ago. The difference this time, of course, is very significant: City councilors decided that “LGBTQ+ stakeholders” will be consulted. Which means, by a wide margin, Toronto’s city council is likely to decide that nobody who doesn’t pass muster with the most extreme factions of the LGBT movement will be permitted access to many public spaces. All of this happened in a matter of days—a stunning handover of power to an ideological movement that seems like an unstoppable juggernaut.

So, to revisit my previous question: It very much looks like there is nothing standing between our Christian communities and that mob. The courts are busy realigning themselves behind the tenets of the Sexual Revolution. The politicians are either championing their cause or cowering. The media, as the CBC’s Carol Off proved in her disgusting interview of Meghan Murphy, are in many cases obediently serving as the LGBT movement’s Inquisition.

So what is stopping them from continuing the transformation of our society? Does anybody think this is going to get better rather than worse?

Does anyone think these people can be reasoned with?

Does anyone think that, considering what has changed in only four years, that the next four are going to magically get better?

If anyone has a positive or encouraging answer to any of those questions, I’d love to hear it. But watching the Toronto City Council buckle after a matter of days, and thinking of Andrew Scheer’s fumbling answers to questions about his faith and beliefs (he looked like he felt guilty for being a social conservative), I couldn’t help but think of a quote attributed to Vladimir Lenin on how revolutionaries achieve victory: “You probe with bayonets: if you find mush, you push. If you find steel, you withdraw.” The LGBT movement is finding nothing but mush, and they are pushing hard. They are pushing fast, too, and it is a short march from their protest outside the Toronto Public Library to our Christian schools, our churches, and more.

This isn’t close to over. This is just the beginning.

I still believe, as I’ve written many times before, that the vast majority of ordinary people do not believe that men can get pregnant, that women can have penises, or that biological males should be allowed into rape crisis centres. In other words, the vast majority of people actually agree with Meghan Murphy rather than the mob outside the Library. But who speaks for the common-sense people? Which politician will step forward and say: “Meghan Murphy not only had the right to speak, but her perspective on this is actually right.” Do you think Ford would risk the wrath of the media and the LGBT activists to say this? Do you think Scheer would? I doubt it. I don’t know of any men in political leadership that would back this brave woman (who, again, I disagree with on almost everything.) And it is partially because of them that everything is crumbling in the face of the LGBT advance.

Someone asked me after my previous column why the LGBT activists won’t leave us alone. There are many answers to that question, but one in particular explains why there will never be any peaceable compromise that lets us get on with things and ignore each other: Envy.

They are not going to let us have our schools and our beautiful children and our happy communities while they suffer. Look at their faces as they protest—these are not happy people, and they do not want us to be happy, either.

Envy is one of the most potent forms of hatred, and they’re going to come after us with a vengeance. Even as the trans experiment comes crashing down around our ears and children find themselves infertile and impotent before even coming of age, we will be blamed for their misery. It will not be the revolutionaries, it will be the “transphobic” religious who get the blame.

I will admit that I fear their rage because I do not think we can compete with it. We have too many things that make us happy to be so angry. We cannot sustain that level of fury because we have too much to lose, and in most cases, our communities have not even recognized the threat that this movement poses, not really.

We pretend we do, but we do very little.

We think we can carry on accumulating wealth, enjoying our families, and going to church as if the entire world is not changing around us and as if the ground is not shifting beneath our feet. So ask yourself this: Could you have imagined, just a few years ago, that this would be happening? And if this is what they accomplished in such a short amount of time, what do you think they can accomplish in the next ten years?

Think about it. Really think about it. Because this is your family, your church, and your children on the line. You may want to ignore them, but I promise you that these activists will not be ignoring you.