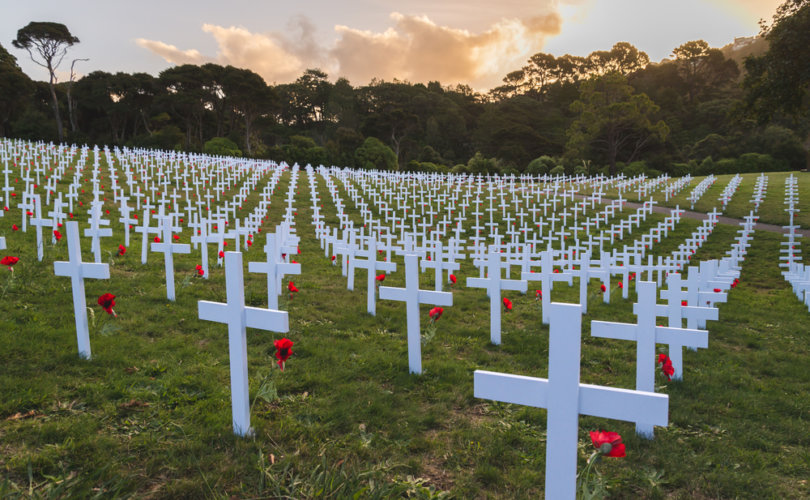 November 14, 2018 (LifeSiteNews) – As all outsiders know, the British have some strange customs. One of the unusual features of British public life is the annual commemoration of those who died in war, on the Sunday closest to the anniversary of Armistice Day, the day the guns fell silent in the Great War, as it was then known. The Armistice came into effect with elaborate, perhaps whimsical, symbolism, on the 11th hour of the 11th day of the 11th month, 1918.

In the past, a minute’s silence was observed on the day itself, but although commemorations have moved to Sunday, the centenary of the First World War has given them a new lease of life in public consciousness. Woe betide the politician or television presenter failing to display a red poppy in public in the run-up to Remembrance Sunday. These poppies can be had in shops and street sellers up and down the land, in return for a small donation for veterans.

One of the remarkable aspects of this national commemoration is that the Catholic Church in Britain sought, and received, permission to celebrate the Mass for the Dead on Remembrance Sunday, following the First World War, and continues to celebrate one to this day.

At that time, in 1918, the need for national mourning was urgent. The period before the First World War had seen the high point of formalized mourning in Britain, initiated by Queen Victoria’s mourning for her husband, Prince Albert, in her long widowhood. The elaborate social rules about wearing black, and restricting social engagements, for set periods of time, were overwhelmed by the vast scale of the slaughter in France, which hit the country’s social elite the hardest. (The British Army’s officers suffered a 17% casualty rate, compared with 12% for ordinary soldiers.)

Since then there have, of course, been many more wars to remember. Britain is able to continue this tradition more fully than other countries in part because, although her war-record is hardly unblemished, is not as politically problematic to remember her fallen soldiers as it is in Germany, Italy, Spain, or even France. The combination of civic and religious ceremony possible in Britain, and the continuity of Britain’s institutions, also help.

Against all these factors, there are inevitably those who are uncomfortable with the commemoration of the war dead, the commonest complaint being that it ‘glorifies war’. This seems a curious reaction to the ritualized expression of public grief, but it contains this grain of truth: the laying of wreaths and the parading of soldiers does not merely remember the dead: it honors them. If one takes the view that all war is evil, then this is no more appropriate than publicly honoring a roll-call of mass-murderers.

The theory of the ‘Just War’ is essential here. If it was unjust to oppose the violent subjection of various countries by Germany and her allies in the two World Wars, the world will be ruled by the most ruthlessly aggressive leaders and their thugs. Similarly, if we are to dismiss the distinction between just and unjust actions within war, the logical result is that soldiers will act unhindered by any moral consideration.

This has never been the teaching of the Church, and it is completely opposed to the message of Scripture. The use of violence against criminals and in war, including the killing of them, by the state, is actually much better-supported in the tradition than the right of private self-defense, which St Ambrose of Milan and St Augustine were both dubious about. They would encourage us to see the justification of war not as an extension of private self-defense, but as the obligation of the rulers of a community who are charged with the preservation of the common good, and are given their rights and duties by God.

If we accept that there is such a thing as a just war, we can begin to understand and to forgive those caught up in it on the wrong side. The rights and wrongs of the international disputes which lead to war are not always clear-cut, and look very different from within different communities. Those who refuse to fight because they recognize a particular war is unjust, like Bl Franz Jägerstätter, are a heroic few. Most others can at least be said to have sought to defend their country, even if they were too ready to listen to the propaganda. It is this thought which makes it possible to regard one’s opponents in war as honorable, limiting the brutality of war, and making post-war reconciliation possible.

It is an unsurprising sociological fact that people are more willing to sacrifice themselves for their community if they see that such sacrifices in the past have been honored by the community. If we are not prepared to honor them when they fall, we should not expect our young people to put themselves in harm’s way for our protection.