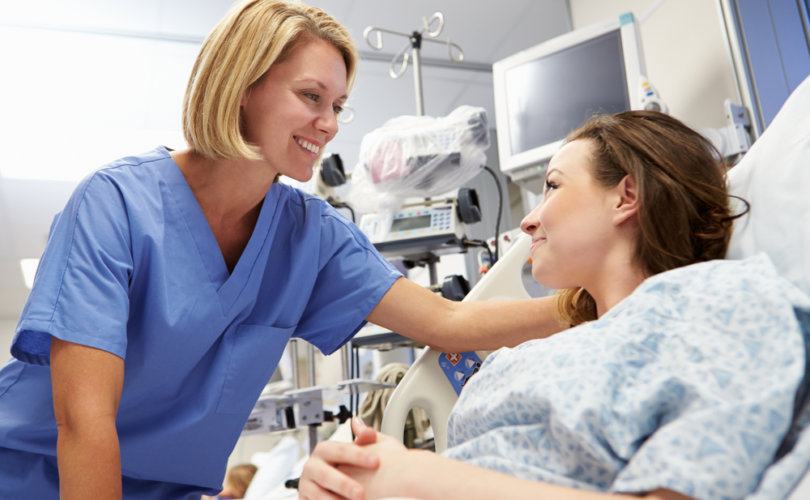 March 16, 2020 (LifeSiteNews) – I have heard in the past couple of days a couple of alarming projections about how many Chinese coronavirus cases we have in the country, and also about the number of people who will supposedly die as a result.  But I have to tell you that the numbers given in these scary scenarios simply don’t add up.

We have, for example, the Republican governor of Ohio, Mike DeWine, going on national television and claiming that because of “community spreading” the number of coronavirus cases may be as many as 100,000 in his state alone.  Although neither he nor his Director of Medical Services explained how they arrived at this astonishing number, it was probably the result of an exponential equation that assumed that every infected person spread the disease to 2.6 others within a few days after showing symptoms of the disease.

A Rate of Infection (ROI) of between 2 and 3 is what the CDC is currently using to track the spread of the Chinese coronavirus.  At an ROI of 2.6—which is an extraordinarily high ROI—it would take only a dozen “transmissions” from Patient Zero to reach 100,000 cases.

But exponents are tricky things.  What if the real ROI was actually closer to the 1.3 characteristic of the seasonal flu?  In that case, every infected person would only spread the disease to 1.3 others.  And the resulting number of infections after the same dozen “transmissions”?  Only Twenty-four (24)!

You see what I mean about exponents being tricky things.  Very small differences in the ROI can produce huge differences over time.  And people can change the ROI by changing their behavior.  This is what washing your hands, coughing into your elbow, and self-quarantine is all about.

But even common sense tells you that Ohio simply cannot have 100,000 cases at the present moment.  Why?  Because to date Ohio has only confirmed 37 actual cases of the Chinese coronavirus, and is testing 361 more.  Well, you say, this is only because the rollout of the test kits has been so slow.

But if that is the case, then why have there only been 7 hospitalizations and not a single death?  That’s zero fatalities as in zero, zip, nada.

That leaves only two possible explanations.  Either the estimate of 100,000 cases is a gross exaggeration or the Chinese coronavirus is much less dangerous than we have been told.  Or both.

To illustrate this, let’s do some even simpler math.  We are told by Dr. Fauci that the CDC estimates the mortality rate for the virus at around 1%.  But if this were true, and there are 100,000 cases in Ohio already, then we would have 1,000 deaths in Ohio alone by the time the disease had run its course in those currently infected.  Even assuming that, because these are early days in the “community spreading” that Governor DeWine has been told is going on, there would still be hundreds of deaths recorded to date.  Literally dozens of people would be dying every week.  The funeral homes would be filling up.  They’re not.

Even if we assume that the Chinese Coronavirus is no more lethal than the seasonal flu, with a mortality rate of 0.1%, the state would still be facing a hundred deaths.  But right now we don’t … have … a single … fatality.  In fact, as of Sunday, March 15th, we only had 62 deaths in the entire United States.

You see what I mean about the numbers not adding up?

There are the even more ominous projections being bandied about.  A number of doctors have suggested that we are facing hundreds of thousands, or even millions of deaths from Chinese Coronavirus.  John Nolte, summarizing these alarming prognostications for Breitbart, warns that the experts are suggesting that the U.S. may see up to 1.5 million deaths from the Chinese Coronavirus.

Such projections are based on an even simpler equation: Number of Chinese Coronavirus Cases times Death Rate (Percent of Those Infected Who Die)

I don’t want to pick on Nolte, whose columns I read and enjoy.  He has been told that 150 million Americans may get Chinese Coronavirus and that 1 percent of these will die.  He simply plugged these numbers into the above equation and was taken aback by the result.

Now it is a mathematical certainty that if 150 million Americans become infected and if one percent of those infected die, then we are looking at a staggering 1.5 million deaths.  But are we?

Where do these assumptions about the rate of spread and lethality of the Chinese Coronavirus come from?

Unlike the Chinese Coronavirus itself, they don’t come from China.  Or at least they shouldn’t.  No one, least of all epidemiologists—those who study how diseases spread and can be controlled—should take Beijing’s statistics on their viral epidemic seriously.  The reported numbers of dead, infected, and recovered are sheer fabrications intended, above all, to make the regime look good.

Many epidemiologists are, however, looking at South Korea or Italy’s epidemics as approximations of what we are facing in the U.S. in terms of the rapid spread and lethality of the disease.

South Korea, for example, is a developed country that has done fairly widespread testing, so we can trust the numbers.  To date, 66 South Koreans have died, 7869 have been infected (some of whom will still die) and 333 have completely recovered.  That gives you a mortality rate of about .9 percent.

The numbers from Italy are in flux, but are at least as bad.

But I think that these two countries are both—for somewhat different reasons—very imperfect analogies to our situation here in the U.S.  Speaking as an anthropologist, a number of cultural factors come into play.  Both South Korea and Italy have populations that are much older, live in much more crowded conditions, and have much smaller “personal bubbles” than your average American.  At the same time, because of declining marriage and fertility rates, elderly Koreans and Italians are much more socially isolated than we are as well, which means that they are going to suffer more consequences from the coronavirus because of a lack of close relatives to help care for them should they fall ill. These are all factors that increase the spread and deadliness of the epidemics of these countries.

Add to these factors several additional ones:

First, if the Chinese Coronavirus behaves like previous viral epidemics, it will become less lethal as it spreads farther afield.   The virus reached South Korea and Italy before it reached our shores.

Second, in Italy, China and even to a certain extent in South Korea, the medical system simply broke down under the weight of a massive wave of severely ill patients arriving in these nations’ ERs all at once.  In China, this resulted in people being left to die in their homes and on the streets.  In Italy, it has led to a triage system where the elderly may be admitted to the hospital but are given only minimal care.  Scarce ventilators, for example, are reserved for younger patients.  Obviously, survival rates for elderly Italian patients have dramatically declined.  Septuagenarians and up are basically being given only palliative care and left to recover on their own.  Many don’t.

Finally, I believe that Americans have modified their behavior in ways that reduce the spread of the infection without the kind of draconian quarantines that other countries have imposed.  This will in turn help to limit the rate at which the disease spreads.

After all, aside from spoiled snowflakes and aging socialists like Bernie Sanders, Americans have never been inclined to simply wait for the government to come and save us.  Be watchful, take precautions, and wait.  This too shall pass.

I will talk about the cultural, behavioral, and demographic factors that will help to mitigate the American epidemic in more detail in Part II