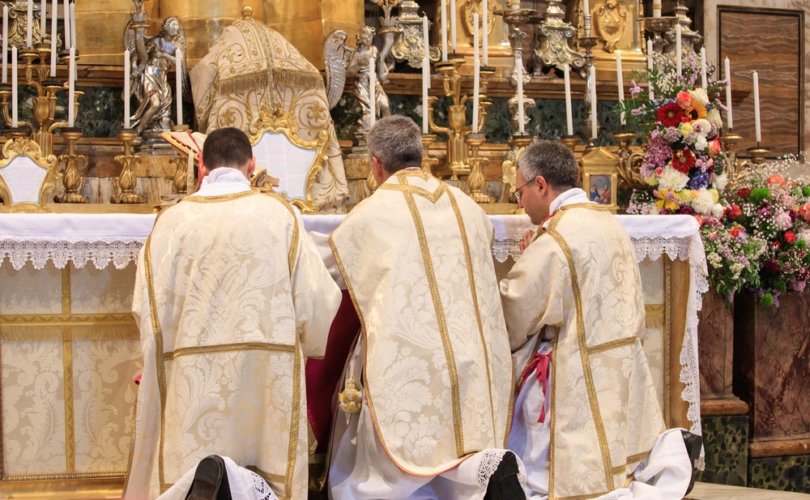 April 30, 2019 (LifeSiteNews) – In the midst of what feels like an interminable and ineradicable abuse crisis, some Catholics will be tempted to pin the blame on the traditional conception of the priesthood, which they poorly understand. In my opinion, the problem is not that we make our clergy too much, but that we have cut them down to a mere human job description instead of seeing their work as a sacred mission to which they are called and consecrated by God.

The solution to abuse is not to cast off the ideal but to emphasize it anew, purified of whatever vices it may have picked up in a certain period of history. Our current period is marred by the Sexual Revolution of 1968, as Pope Emeritus Benedict XVI recently observed in his letter on the abuse crisis. One might add that our period is also marred by egalitarianism, horizontalism, and secularism, a devil’s brew that prevents clergy who drink it from aspiring to, and rejoicing in, the full spiritual nobility and self-sacrifice demanded of their vocation.

The figure of the priest as it has been known in the West for nearly two thousand years has been gradually scaled down in the past few decades to something that can hardly be recognized as official, much less as sacred or sacerdotal. Most of the priests I was acquainted with in my youth cut the figure of administrators who handled public relations, luncheons, fundraising, and the like, handing over to laity the responsibilities of “liturgical planning” and even the distribution of Holy Communion, for which the priest’s hands have been anointed. What ever happened to the priest, that mysterious and majestic representative of God?

Consider for a moment how anti-traditional tendencies, whose bitter fruits we are still reaping, affect the priest’s role in the parish and his own perception of the duties belonging to his office. There can be no doubt that priests ought to be shepherds, teachers, and rulers in imitation of their divine model; for there is no doubt that people in all ages need to be shepherded, taught, and ruled. The most important channels for the exercise of this threefold office are the confessional, where the priest can pardon sinners and lead them to holiness, and the sacred liturgy, through which he can unite the faithful to the awesome and life-giving mysteries of Christ.

The false conception of liturgy as a gathering for song and socializing, however, devalues everything the priest is meant to be, turning him into a mere “facilitator” of parish activities scheduled for a Sunday morning. There is no reason why any other person could not “facilitate” those same simple tasks: all it takes is one who can read whatever is printed on a page stuck into a binder. This utilitarian reductionism is part of the reason why some Catholics talk so glibly about “deaconnesses.” I’ll bet if the deaconnesses had to be involved in solemn Latin liturgies lasting many hours, they would not be clamoring for the work.

When mysteries of faith and the adoration of God recede into the background, when the doctrine of Christ and His Church receives scarcely a moment’s attention, when the confessional is empty, the priest loses his reason for being. If men are not really sinners, how could they stand in need of sacramental absolution? If men are not really called to work out their salvation in fear and trembling, how could they need—much less hunger for—the Bread of Life? No wonder Reverend Father feels that his days are humdrum. He is no longer governing, healing, and nourishing souls with God Incarnate.

After attending a rapid and vapid parish Mass one morning, it dawned on me why, in some parts of the world, the priesthood is verging towards irrelevance: the priest is no longer a ruler, teacher, and sanctifier. His chief reason for existing, to offer sacrifice to God on behalf of the people, is slipping away. To the extent that Catholics adopt a Protestant view of “ministry,” the sole grounds for a sacerdotal hierarchy and ordained priesthood is obliterated. If the congregation is, as the progressive liturgists say, the real celebrant and the priest only a representative who works on their behalf, he becomes no more than a glorified layman who has the enviable chance to wear a technicolor dreamcoat and sit upon a wooden throne; and obviously there is little attraction to being a pedestaled celibate in an age where good things are measured by carnal comforts. In the absence of genuine spiritual aspirations, the sense appetites reassert themselves—and not surprisingly, we hear incessant clamoring for a married clergy.

Let us not be mistaken about the deeper reason that Protestants immediately rejected celibacy in the sixteenth century. If the priesthood has not been instituted by Christ in order that the world may be filled with “other Christs,” men set apart to carry on the sacred work of the Eternal High Priest, then there is absolutely no basis for any distinction between layman and priest, or for any distinctive sacerdotal way of life. The Protestants knew from the start that a congregationalist understanding of the Church nullifies hierarchy as well as sacrifice; in an egalitarian society of believers, each member rules and sanctifies himself by personal communication with the Holy Spirit.

The abuse crisis and the campaign against celibacy, in spite of their superficial opposition, are in fact two sides of the same coin: both result from abandoning the mystical identification of the priest with Christ, and setting aside the “heroism and genius” of this specially favored way of life that is meant to be a blessing for the entire Church. If we want good and holy priests, and many of them, the one and only thing we must do is recover a thoroughly traditional Catholicism that understands the dignity and demands of the priesthood. Anything short of that will only produce more abuse, be it criminal or subliminal.