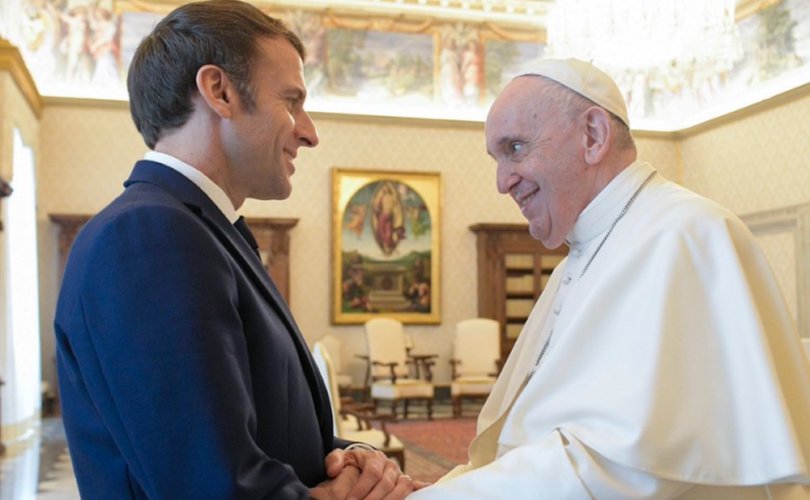 VATICAN CITY (LifeSiteNews) — President Emmanuel Macron of France paid a highly publicized visit to Pope Francis last Friday during which – to the surprise and shock of French observers – he used the familiar “tu” form when speaking to the head of the Catholic Church. Many considered this to be the sign of a profound fraternity if not complicity between the two men. If proof was needed that their political agendas have many points in common, here it was.

The “fraternal” meeting took place at the time when France is increasing its dictatorial COVID restrictions. It was at the beginning of last week that masking requirements — even in open air venues — even for the “vaccinated” — were implemented. As of December 15, elderly people with only two doses of the experimental jab will lose their sanitary pass, and the same rule will apply to people aged 18 to 64 from January 15.

The non “vaccinated” are also facing more severe restrictions: sanitary passes associated with a negative COVID-19 test are now valid for only 24 hours after testing instead of 72 hours permitted previously, meaning a negative PCR test – required for air travel and entering a hospital, apart from emergency consultations – whose results take up to 24 hours to obtain and communicate – may be valid for only a few hours, if at all. A number of citizens are facing daily “antigen” tests (which give almost immediate results) just to keep their jobs and have to pay for them out of their own pockets.

But this was not the only element of a context that shows France sinking deeper into complete apostasy. It has recently legalized 100 percent state-funded artificial procreation for lesbian couples and single women, and even as Pope Francis and Macron were speaking together on Friday morning, France’s National Assembly was preparing to vote on the lengthening of the legal abortion period from 12 to 14 weeks of gestation. That debate took place on Monday and Tuesday of this week. Late on Tuesday evening, the handful of legislators present (out of a total of 577) voted for the extension by 79 votes for and only 36 against. No sound came out of Rome following the Francis-Emmanuel meeting to warn France against the tightening grip of the culture of death on French society.

Instead, the carefully selected video images coming from the Vatican meeting, courtesy of the Vatican News service, lingered on the Pope and the president’s enveloping embrace and warm body language. French-speaking Vatican correspondents who were watching the filmed scene from the press room could hardly believe their ears when they noticed Macron, who was speaking French, was saying “tu” and “toi” (that is, to “tutoyer”) when addressing the Pope.

In conversational French, the pronoun “vous” (“you”) is used for formal address of individuals (as well as plural addressees familiar or otherwise), while the singular pronoun “tu” (also “you,” a relative of Middle English “thou”) is reserved for use among intimate friends. A person who uses “tu” to address his or her elders, for example, is committing a breach of etiquette. The French verb tutoyer – literally, “to address with the pronoun tu” – was borrowed into English in the late 17th century to refer to this concept.

During the exchange of presents at the end of the meeting, which took place in French with the help of a translator, according to the Rome correspondent of Le Figaro, Jean-Marie Guénois, Macron could clearly be heard saying:

“This is a little book which is a profile of Ignatius of Loyola, whom you (tu) know better than I do…»

“Oui” (yes), answered the Pope, smiling, accepting the contemporary work by François Sureau, ​Iñigo, which is a good book, by the way.

Moments later, holding both the Pope’s hands in his, Macron said, almost tenderly: “Je t’ai fatigué [I have wearied you] … Merci de ta patience [Thank you for your patience].”

— Article continues below Petition —
HELP AUSTRALIANS restore their freedom by protesting outside YOUR Australian Embassy - Dec. 4th - FR
Show Petition Text
114 have signed the petition.
Let's get to 1000!
Thank you for signing this petition!
Add your signature:
Show Petition Text

1) SAVE THE DATE and ATTEND a Pro-Freedom Rally on DEC. 4th (12pm, local time) at the Australian Embassy in France (Paris address below).

2) Please SIGN and SHARE this petition, directed to the Australian Ambassador to France, H.E. Gillian Bird, asking her to:

LOCATIONS and PHONE NUMBERS of the Australian Embassy in Paris. [Please use the phone number to politely, but firmly object to the oppression of the people of Australia if you can't go to the protest in person.]:

This is so out of step regarding French conventional politeness that often people who use the familiar “tu” form with a friend or colleague will not do so when speaking together in a public setting, such as a formal meeting, a radio or television show or interview. This is even more true when addressing a priest, or, a fortiori, a bishop – let alone a cardinal or a Pope, given the extraordinary protocolar details that surround the visit of a head of state to the head of the Holy See.

Jean-Marie Guénois,  Le Figaro’s head of religious affairs, commented on the meeting saying that the personality of the Argentinian Pope Francis, who has shown his disregard for excessive protocol and has often broken the rules, could in part explain the widely publicized breach.

He added that the French media team of Emmanuel Macron have gone out of their way to make the most out of the visit for electoral purposes. The meeting took one hour, which is not exceptional compared with other meetings of the Pope with heads of state, but this was commented on as being a sign of support on the part of Francis for Macron. Guénois, in fact, downplayed the incident, presenting it as a media stunt on the part of the president’s team at a time when Macron is already in practice campaigning for his re-election next April. However feeble the Catholic vote, it can have its importance as a determining marginal force.

While this reasoning is certainly true insofar as Macron – under whose watch abortion laws, personal freedoms, homeschooling, secularism, support for the traditional family, and other Catholic themes have been consistently treated contrarily to the natural law – is anxious to have Catholic support, this cannot be the whole story.

At the meeting, Macron and Pope Francis are said to have discussed “protection of the environment in the wake of the recent COP26 meeting in Glasgow,” surrogate motherhood which is the next stage of LGBT campaigning in France, and of course the COVID “vaccine” which they both support.

The French president’s official Twitter account showed a picture of the meeting with the caption: “Regarding climate and biodiversity, access of all to the vaccine, countries that have less or that are going through crises like Lebanon, we share with the Pope one same determination and universal values.”

The meeting was clearly a highly political one in which policies and plans must have been at the heart of the discussions.

Macron, a former laureate of the World Economic Forum’s “Young Leaders” program was “like a fish in water” – as we say here in France – during his back-slapping audience with Pope Francis. Not a good sign.