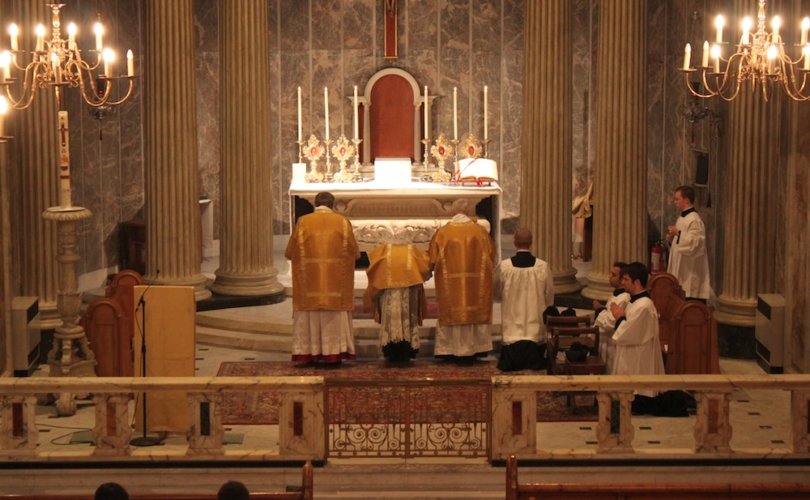 October 9, 2018 (LifeSiteNews) – Despite the fact that his diocese is desperately short of vocations, Bishop Gunn of Münster recently declared: “I can decidedly say I don’t care for pre-conciliar types of clerics, and also I will not consecrate them.”

This is not an uncommon attitude, and it is not limited to Germany. I have heard stories from the English seminary, St. Cuthbert’s College at Ushaw, now closed for lack of custom, that superiors were so concerned to root out conservatively-minded candidates for the priesthood that they would watch how they held their hands during Mass. If they folded them prayerfully, this went on the record as a mark against them. Seminarians would meet to say the Rosary in each others’ rooms, in secret, for fear this subversive activity would get them into trouble, and hide theology books by Joseph Ratzinger.

This attitude seems to go beyond a simple matter of theological disagreement. Signs of conservatism are regarded as akin to signs of leprosy, and indeed, it is not uncommon to hear theological conservatism or traditionalism compared to mental illness. It should be said that this attitude is much less bad, at least in the English-speaking world, than it was a generation ago, but it has not gone away, and it is striking that a German bishop should embrace it so openly.

While I lack any special information about Bishop Gunn, I think I can shed light on the phenomenon as a whole. The language commonly used about young conservatives and traditionalists – “rigid,” “conformists,” “authoritarian,” “clericalist” – are related to trends in psychiatry which were influential in the decades after the Second World War. Here is a typical description of the “authoritarian personality” published in 1970 (Peter Kelvin, The Bases of Social Behaviour):

These tendencies reflect on a type of individual who needs to feel that his environment is highly predictable … he needs to know where he stands; and so he fastens on to norms: he does not “let himself go,” for fear of where this might lead; he looks to authority as a guide … [He also] relies very heavily on stereotypes in [his] perception of the social environment. Moreover, the stereotypes used by an authoritarian personality tend to be very clear-cut, and the characteristic inflexibility of this personality leads to relative inability to modify the stereotype once it has been formed.

In the context of the day – the ongoing sexual revolution – those who do not wish to “let themselves go,” who “fasten on to norms,” and who “look to authority,” are simply social conservatives. The author wants to connect this moral or ideological position with “authoritarianism.” One of the key figures in this strand of psychiatry, Theodor Adorno, explicitly connected it with Nazism. The connection is made by the claim, which is the key-stone of this view, that the real reason that people adopt socially conservative attitudes is psychological weakness. They “need to know where they stand,” they want a “predictable environment” because they have fragile egos, they lack self-confidence: they are, in short, afraid.

Pope Francis also seems to have been influenced by this view. As he said about young people who like the Traditional Mass:

And I ask myself: Why so much rigidity? Dig, dig, this rigidity always hides something, insecurity or even something else. Rigidity is defensive. True love is not rigid.

The difficulty with this view is that there is no necessary connection between social conservatism and the ego-soothing approval of peers and superiors which is typically sought by people who lack self-confidence. Since the sexual revolution started with the social and educational elite, and spread down the social scale, it would have been unwise at any stage in its history to assume that its opponents were seeking the favor of the establishment, or that its partisans were courageously risking their position in society. By the 1980s, a young person who failed to follow the new rules risked being a social outcast. That is not the path favored by those nurturing insecurity.

The same is true of theological conservatism in many seminaries today. Bishop Gunn leaves potential seminarians in no doubt: evidence of “pre-conciliar” tendencies will end your chances of ordination.

Part of the background to this psychiatric theory is Sigmund Freud’s claim that people who were sexually continent are “repressed.” Freud suggested that bottled-up sexual energies might break out in hysteria, depression, or violence. These claims, however, lack empirical backing, and are obviously incompatible with Catholic teaching.

How many bishops, vocations directors, and seminary rectors still harbor the view that young men who have stood out against peer pressure to maintain their sexual integrity, or to develop a counter-cultural spiritual life, must for that reason be psychological weaklings? It is time such ideas were more openly identified and challenged.