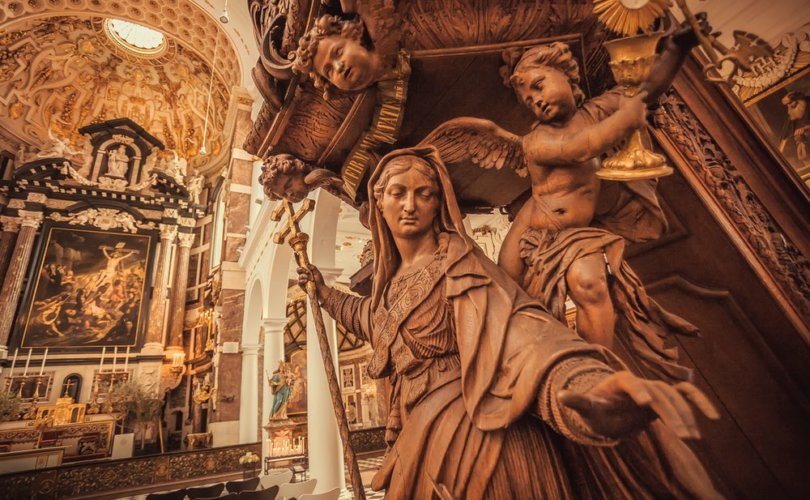 May 21, 2020 (LifeSiteNews) – A friend expressed his concerns about my strong advocacy of the traditional Latin Mass and my ongoing critique of the liturgical reform. He asked me why it was not sufficient to enrich the reformed Mass with elements of Catholic tradition bit by bit, as occasion allows. He also asked what is the basis of my skepticism of Church authority and whether I am not at risk of rejecting it in a Protestant fashion.

Thank you for your letter, and especially for your friendly words and concerns.

I am on record saying that it’s a good thing, as far as it goes, when Catholics can be exposed to elements of tradition—be it chant, beautiful hymnody or polyphony, male altar servers properly vested, Mass ad orientem, communion on the tongue kneeling, etc.—wherever and whenever they attend church. These things are part of our patrimony and form us in the true Faith.

At the same time, the relatively isolated and dissociated condition of these elements in postconciliar Catholicism makes them rather like flotsam and jetsam left from the titanic wreck of the 1960s. They are found all together—at home, in their original configuration, harmony, and unanimity—in the traditional liturgical rites of the Church, Eastern and Western. That is what I argue in my lecture “Beyond ‘Smells and Bells’: Why We Need the Objective Content of the Usus Antiquior,” which identifies inductively the universal attributes of traditional Eucharistic rites that predate the Novus Ordo. What we need to get back to is that traditional worship, not a modern mishmash that is missing most of those attributes.

Not all can return immediately to the point before the serious deviations began—shortly after World War II, as the Liturgical Movement turned radical and lost its bearings—but the younger generations are quite open to the work of restoration, being free of the baggage carried by older folks who had to make do with what was given to them (or not given to them). The most effective evangelization in our times will be one that accentuates the wonder, beauty, and “strangeness” of the divine, rather than its domesticated familiarity and rational accessibility.

It’s hard for me to see how, within the Novus Ordo world, there could ever be the effective determination, organization, clarity of vision, and episcopal support to bring about what the Adoremus folks (proponents of the “reverent Ordinary Form”) envision. Outside of rare outposts, the project is more of a sinking ship than a vessel yet untested. If I had to place bets, they’d all be on the traditional Mass—not just because I love it, but because I think it has staying power. If it weathered an attempt to suppress it utterly by the most powerful institution in the world claiming to act in the name of God and demanding blind obedience, it can obviously weather anything else that modernity or postmodernity has thrown or could throw at it.

May I differ respectfully with you about nomenclature? You objected to my use of the phrases “Novus Ordo” and “new Mass.” Yet Pope Paul VI in 1965 (and it was not the only time) gave a papal audience in which he described the 1965 interim missal with the word “new” eleven times: “new, startling, changed”; “new order” (=Novus Ordo); “new scheme of things”; “new liturgical books”; “new form” (twice); “new liturgy” (twice); “new habit”; “liturgical innovation.” Here we have a pope identifying the interim missal of 1965 as a novel thing, when it was vastly less of a novelty than the missal of 1969/1970. In 1969, Paul VI used a whole barrage of similar words to characterize the Novus Ordo, and in 1976 he went ahead and used the phrase “Novus Ordo Missae.” This whole way of speaking derives from Pope Paul VI himself, and I see no reason not to follow his accurate descriptions. To the objection that “it is already fifty years old,” I would merely point out that fifty years is a miniscule 3.125% of the 1,600-year history of the Roman rite. While the handiwork of Paul VI may be old in terms of the life of a single man, it is shiny new in comparison with the millennium-and-a-half arc of the Western liturgy’s continuous development.

You and I are both musicians strongly shaped by the pursuit of the beautiful. We have composed a lot of music for the reformed liturgy. I’ve composed as much in English as I have in Latin, and my English music will almost never be used at a TLM. The fact is, the art of music was my “hiding place” where, for a long time, I found refuge from the pain of the knowledge I had acquired by studying the history and theology of liturgy. There came a point when I had to admit that fine art, however captivating, was simply not enough to address the root problem; it was like wrapping a bandage around a severed limb, expecting it to regenerate. The bandage may staunch the blood, but it will not restore integrity to the damaged body, nor functionality where the limb is missing.

This by no means detracts from the inherent value of well-made art, or its power to move, to edify, to elevate; and to that extent, I admire what good Catholic composers, architects, and other artists are doing to improve the “tone” of the Novus Ordo. But when I look at the larger picture, I see this kind of endeavor as a rickety bridge that leads from a flawed reform back to a full inheritance.

Even though I consider the reformed rites to be defective and harmful, I also acknowledge that they have been and can be occasions of grace for individuals. As St. Augustine and St. Thomas clearly teach us, following Scripture, the Lord always brings good from evil. So in my view of things, it is possible both to disagree with the reform and to accept that it has been a vehicle of grace for some—although it has been an occasion of sin for many others, beginning with its architects, who sinned gravely against the virtue of piety for tradition.

You then raise the million-dollar question: What are we to make of Church authority in all this? Has it been asleep at the wheel? Has it been undermining the very Church it is supposed to support and serve? Are we ever justified in setting ourselves against what ecclesiastical authorities have determined to be best for us in the realm of the liturgy—or does that make us renegades driven by private judgment?

One of the hardest things for me in my life as a Catholic has been coming to grips with the problem of major failures on the part of Catholic bishops. Minor failings have we all, and no one can escape them; but we are looking at a double systemic abuse: abuse of the liturgical inheritance and abuse of the most innocent and vulnerable of the Lord’s people. These are, regrettably, related to one another, as I discuss in this article. Take someone like Rembert Weakland, who was both a major figure in the liturgical reform and, as we later discovered, an active homosexual; and he is far from alone.

I think it is part of a difficult renunciation to be able to say—without denying that bishops and popes truly possess their offices, and without contumaciously or pertinaciously disobeying them in those matters over which they have legitimate authority—that serious errors and crimes have been committed, from which we must recover, and that we have a duty to resist those who espouse them (e.g., bishops who forbid Catholics from receiving Our Lord on the tongue). The Lord has raised up many laity to lead this effort, and there are good priests and bishops in the same movement of true reform, which means, as Martin Mosebach says, a return to form, that is, an intensification of discipline, not its relaxation.

In a way one could not have predicted solely on the basis of a neo-scholastic conception of how church authority works, it seems not only possible but undeniably true that major deviations have occurred through the abusive exercise of that authority. It has proved necessary and salutary for members of Christ’s flock not only to refuse to follow certain directives, but also to actively oppose them. Even Summorum Pontificum, the pacific tone of which might make one think Benedict XVI was merely clearing up some unfortunate misunderstanding, is the result of decades of struggle in which laity and lower clergy were pitted against a hierarchy determined to crush them (and that is no exaggeration, as Leo Darroch’s book shows in horrific detail).

It was during the Protestant Revolt that reformers first took it upon themselves to construct liturgies according to their own doctrines and perceptions of what their contemporaries “needed” (as Michael Davies brilliantly demonstrates in Cranmer’s Godly Order). The Consilium in the 1960s acted in quite the same manner, producing rites in a way no Catholic rite had ever been produced in the history of the Church—more like test tube babies than children conceived in natural wedlock. In a bitter irony, the ones who acted like Protestants were the liturgical reformers working for the Vatican, not the Catholics who held fast to the stable tradition that perfectly expresses the dogmatic teaching of the Bible and the ecumenical Councils.

I am not convinced that, in being asked to accept such rites as authoritative and Catholic, one is not being asked to act against a well-informed conscience. It seems to me something like intellectual suicide to accept that what Bugnini & Co., Ltd., have given us is in harmony with the foregoing tradition. We are dealing here with a mysterium iniquitatis that beggars belief, but is nevertheless compassed within the kenosis and victory of Christ as we move towards the end times.

May the Lord lead us forward along the path of a tradition received in humility, cultivated in love, and enriched with the fruits of centuries of fidelity and Catholic culture.

Cordially yours in Christ,