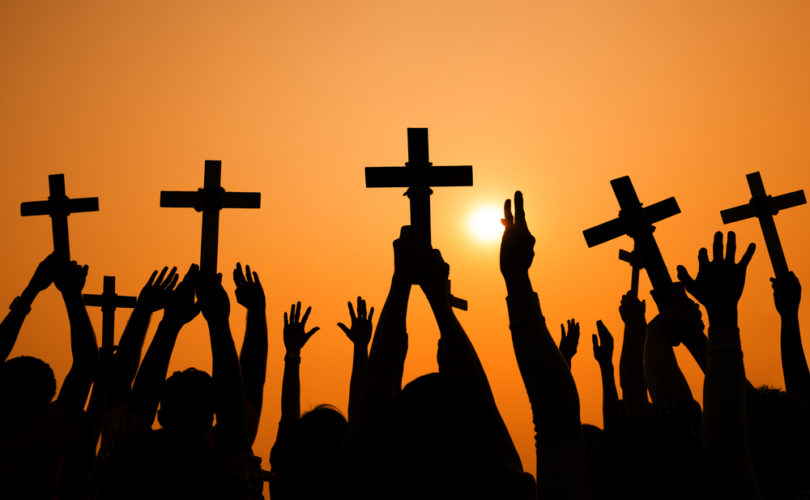 “Are you guys religious?” It’s a question every pro-life activist doing educational outreach has heard. The question is always leveled suspiciously, as if the truth of our abortion victim photography is contingent on whether or not pro-life activists believe in God.

The response to this question is simple: Abortion is wrong because it is an act of violence that destroys a human being developing in the womb. On this everyone from the late atheist Christopher Hitchens to the pope can agree. Yes, many of us are Christian, both Protestant and Catholic. But a basic overview of embryology textbooks used in medical schools across Canada and the United States should suffice when trying to determine whether or not the child growing in the womb is, in fact, a human being, and therefore deserves the right to life.

But I’m tired of this question. The secular left, glutted with victory, seems to think that asserting someone’s Christian faith disqualifies them as credible human rights activists. While their contempt and hatred for Christians—excepting those religious quislings who make the right compromises—is well known, the opposite is actually the case. While the secularists would like to try and revise history to claim that the great social reformers of the past were acting based on deeply-held liberal values, the fact is that these heroes virtually always acted because of their Christian faith.

If you want to know why we live in a culture today that has purged itself of many great societal evils, from slavery to segregation, the answer is because of Christianity. There is, in fact, no tradition that has such a rich and beautiful history of defending the poor and the afflicted as the Christian tradition.

William Wilberforce, the great British parliamentarian and abolitionist, was a conservative evangelical who spent his whole life tirelessly working to end the slave trade as well as slavery itself. He focused on dozens of other issues as well, from rooting out political corruption, alleviating poverty, promoting education, and even beginning a society to prevent the cruel treatment of animals. And why? For the honor and glory of his Creator.

“Is it not the great end of religion,” Wilberforce noted, “and, in particular, the glory of Christianity, to extinguish the malignant passions; to curb the violence, to control the appetites, and to smooth the asperities of man; to make us compassionate and kind, and forgiving one to another; to make us good husbands, good fathers, good friends; and to render us active and useful in the discharge of the relative social and civil duties?”

Or, as he famously wrote: “God Almighty has set before me two Great Objects: the suppression of the Slave Trade and the Reformation of Manners.”

The other abolitionists, too, were Christian. Granville Sharp, one of Wilberforce’s staunchest allies and England’s most dedicated anti-slavery campaigners, was not only a devout Christian but a biblical scholar. Working almost his entire life to free the slaves, when he heard the news on March 25, 1807 that the Act of Abolition had passed, his response was to drop to his knees and thank God for the end of the horrific slave trade. Thomas Clarkson, the tireless abolitionist activist, was an ordained deacon. Every member of the Society for Effecting the Abolition of the Slave Trade was, without exception, religious.

From the fiercely religious William Lloyd Garrison, to the renowned “President of the Underground Railroad” Levi Coffin, the American abolitionists also acted out of a deep sense that slavery offended God. Revisionist historians of late have tried to claim that Abraham Lincoln, because he never committed to a denomination, was not a Christian and that his religious beliefs had no impact on his views of slavery. Those historians can only hold such a position by steadfastly ignoring virtually every speech Lincoln gave. My personal favorite is his Second Inaugural Address, when Lincoln noted that both the North and the South prayed to the same God:

It may seem strange that any men should dare to ask a just God's assistance in wringing their bread from the sweat of other men's faces; but let us judge not that we be not judged. The prayers of both could not be answered; that of neither has been answered fully. The Almighty has his own purposes. “Woe unto the world because of offences! for it must needs be that offences come; but woe to that man by whom the offence cometh!” If we shall suppose that American Slavery is one of those offences which, in the providence of God, must needs come, but which, having continued through His appointed time, He now wills to remove, and that He gives to both North and South, this terrible war, as the woe due to those by whom the offence came, shall we discern therein any departure from those divine attributes which the believers in a Living God always ascribe to Him? Fondly do we hope–fervently do we pray–that this mighty scourge of war may speedily pass away. Yet, if God wills that it continue, until all the wealth piled by the bond-man's two hundred and fifty years of unrequited toil shall be sunk, and until every drop of blood drawn with the lash, shall be paid by another drawn with the sword, as was said three thousand years ago, so still it must be said “the judgments of the Lord, are true and righteous altogether.”

Secular historians, and today’s “social justice” activists, simply cannot understand such language and such concepts. And so, they attempt to write the very faith that drove these men to do such wonderful things out of the history books.

The best example of this is the Rev. Martin Luther King Jr. Because of some of his left-leaning political views, borne out of his raw experiences with impoverished African American communities and systemized injustice, the secular left today hold Rev. Martin Luther King Jr. as a hero who would have been on their side—a “progressive” that would have embraced the excesses of the Sexual Revolution and all the carnage that has resulted from it.

Again, I think they may simply be ignoring virtually everything King wrote, and every speech King delivered. King demanded justice on the basis that all men were created equal in the eyes of God. Hymns, spiritual songs, and Scripture permeated virtually every one of his calls for the end of segregation, from his “I Have A Dream” speech to his beautiful and soaring “I Have Been To The Mountaintop” address. It was always the Christians, Rev. King wrote in his Letter from a Birmingham Jail, who sought to change society for the better:

There was a time when the church was very powerful–in the time when the early Christians rejoiced at being deemed worthy to suffer for what they believed. In those days the church was not merely a thermometer that recorded the ideas and principles of popular opinion; it was a thermostat that transformed the mores of society. Whenever the early Christians entered a town, the people in power became disturbed and immediately sought to convict the Christians for being “disturbers of the peace” and “outside agitators.”…By their effort and example they brought an end to such ancient evils as infanticide and gladiatorial contests.

So when people want to know if pro-life activists are Christian, the answer is yes, most of them—although certainly not all of them—are. In fact, if you want to know why we live in a culture today that has purged itself of many great societal evils, from slavery to segregation, the answer is because of Christianity. Christianity shaped the West, and Christians spent two centuries rooting out injustices that lingered. There is, in fact, no tradition that has such a rich and beautiful history of defending the poor and the afflicted as the Christian tradition.

And what we see today is simply an example of what the great William Wilberforce noted of pre-Victorian England so many years ago. “Christianity has been successfully attacked and marginalized,” he wrote, “because those who professed belief were unable to defend the faith from attack, even though its attackers’ arguments were deeply flawed.”