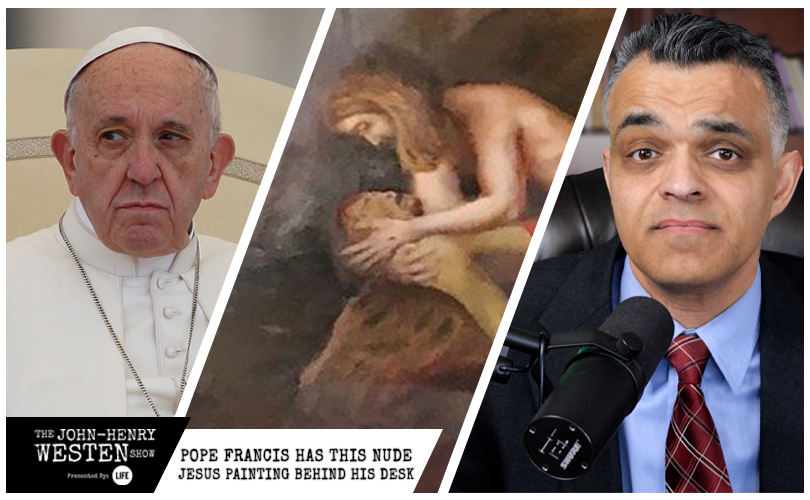 April 7, 2021 (LifeSiteNews) – According to the Vatican’s own newspaper L’Osservatore Romano, Pope Francis has placed a painting of a resurrected nude Jesus ministering to Judas, Christ’s own betrayer, behind the Pope’s desk in his personal study in the Vatican.

The Vatican newspaper dedicated the first three pages of its Holy Thursday edition to Judas and called into question, as Pope Francis has done, Judas’ damnation. Although Pope Francis has, several times already, suggested that Judas is not in hell, that notion directly conflicts with statements of previous popes and Our Lord Himself, who said of Judas it would be better for him that he had not been born.

L’Osservatore Romano, which is officially approved before publication, featured as its cover photo a scandalous painting of a nude resurrected Jesus ministering to Judas. And if that’s not bad enough, the acompanying editorial explains that that painting was inspired by one of Pope Francis’ books that suggested Judas may not be in hell, and that the artist gave it to Francis, who had placed it behind his desk in his personal study along with a statue of Jesus carrying Judas as a lost sheep.

Now, I hate to say it but, considering the track record of Pope Francis, it’s not all that surprising that he has such a fascination with Judas. To many faithful Catholics, it seems like Francis is betraying the Mystical Body of Christ in much the same way that Judas betrayed Our Lord.

This painting being behind the Pope’s desk and placed on the cover of the Vatican newspaper is itself a scandal. Andrea Monda, the director of L’Osservatore Romano, explains in the Vatican newspaper’s editorial that the painting was inspired by Francis’ 2018 book Quando pregate dite Padre Nostro in which Francis suggests the salvation of Judas.

It’s not the first time Francis has pushed the notion that Judas may be saved. Last April, he did the same thing in a televised homily in his private chapel on Wednesday of Holy Week, where he had to read that very passage where Jesus says it would be better for Judas not to have been born.

“How did Judas end up? I don’t know,” said Pope Francis at the time.

As often happens, Pope Francis let’s his trusted men speak with more vigor than he himself would. In December last year, one of Pope Francis’ most trusted allies in the Vatican, Archbishop Vincenzo Paglia, went so far as to say that all those who say Judas is in hell are “heretics.”

Paglia, who is the President of the Pontifical Academy for Life, said on December 10, 2020 that, “We must also remember that, for the Catholic Church, if someone says that Judas is in hell, he is a heretic.”

In that same address, Paglia asserted that a priest may legitimately remain at the bedside of someone undergoing assisted suicide in order to “hold their hand” and “accompany” them.

Nevertheless, the teaching of the church is clear on the damnation of Judas. The Catechism of the Council of Trent is very explicit on this point saying that Judas “lost soul and body” and that his betrayal despite his priesthood “brought him everlasting destruction.”

Moreover, the first Pope, St. Peter, was clear that after Judas betrayed Christ he had to be replaced as an apostle, whereas after the deaths of other apostles they were not replaced.

The first Pope argues that Judas, by his transgression, fell away from the apostleship forever. Note that Judas was the only apostle whose place had to be filled after his death. When James was killed by Herod (Acts 12:2), Peter and the others did not appoint another man as a James substitute. There were successors to the apostles (and many more than twelve of them!), but no other replacements. Ultimately, all of the original eleven together with Matthias left this world in death to become the everlasting foundations of the heavenly Jerusalem: “And the wall of the city had twelve foundations, and in them, the twelve names of the twelve apostles of the Lamb” (Rev 21:14). Put simply, an apostle who died in a state of grace is an apostle forever, irreplaceable, going to his reward as a perrmanent foundation stone of the Church. This can only mean that Judas, who had to be replaced, died in sin and lost his ministry and apostleship forever. He went “to his own place,” that is, the place that befitted him: hell.

But we hardly need go to the Catechism or even the first Pope on this question when Our Lord Himself has already been explicit on it. Three times in the Scriptures, Jesus is recorded as indicating Judas’ ultimate fate. In John 6:71, Jesus calls Judas a devil. He says “Have not I chosen you twelve? And one of you is a devil.” The following verse explains, “Now he meant Judas Iscariot, the son of Simon; for this same was about to betray him, whereas he was one of the twelve.”

In John 17:12, Jesus calls Judas the “son of perdition” in his prayer to God the Father. “While I was with them, I kept them in thy name. Those whom thou gavest me have I kept: and none of them is lost, but the son of perdition: that the scripture may be fulfilled.”

And finally, in both the Gospels of Matthew 26:24 and Mark 14:21, we hear Jesus saying of Judas: “It would be better for that man if he had never been born”

As Cardinal Avery Dulles once reflected when contemplating these verses in an article about the fate of Judas: “If Judas were among the saved, these statements could hardly be true. Many saints and doctors of the Church, including St. Augustine and St. Thomas Aquinas, have taken it as a revealed truth that Judas was reprobated.”

So, let us never presume our salvation. Let us rather work out our own salvation with fear and trembling, as St. Paul teaches. We must practice self-control or, as St. Paul says in 1 Corinthians 9:27, “I chastise my body, and bring it into subjection: lest perhaps, when I have preached to others, I myself should become a castaway.”

Hell is not empty of human souls. As Our Lady of Fatima revealed to the three children of Fatima, there are many many souls falling into hell like snowflakes. That is why this life is all about winning our eternal salvation. St. Paul likens it to a race which we have to run.

So, let’s run the race, let’s fight the good fight! Let’s strive to get to that place where St. Paul was right before his martyrdom when he said (2 Timothy 4), “I am even now ready to be sacrificed: and the time of my dissolution is at hand. I have fought a good fight, I have finished my course, I have kept the faith. As to the rest, there is laid up for me a crown of justice, which the Lord the just judge will render to me in that day: and not only to me, but to them also that love his coming.”