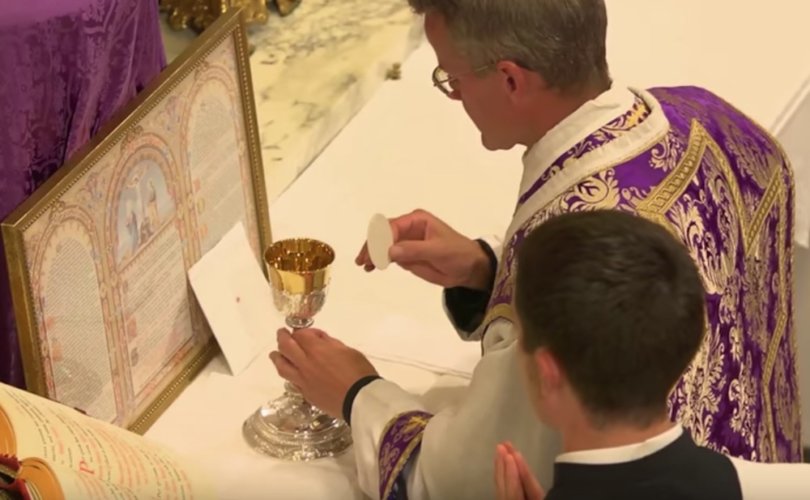 A priest of the Society of St. Pius X offers Mass in 2015YouTube / SSPX

(LifeSiteNews) — During Bishop Athanasius Schneider’s recent visit to the United States, he made repeated remarks in defense of the Society of St. Pius X (SSPX).

In one interview, with LifeSite’s editor-in-chief John-Henry Westen, he said that “the SSPX is surely not schismatic.”

In an interview with The Remnant’s editor-in-chief, Michael Matt, the Kazakh bishop, when speaking about resisting the unjust suppression of the traditional Latin Mass, stated that even priests could “go to the SSPX” in order to be able to continue their priestly work in the traditional rite.

Schneider argued in defense of the SSPX, reminding the faithful that the society prays for Pope Francis and the respective local bishops in all their public Masses, which are signs that they wish to remain united with the Catholic Church.

Schneider also pointed out that “Pope Francis granted … habitual, ordinary, universal faculties of confession to the priests of the Society of St. Pius X,” explaining that by granting the SSPX the right to assist at marriages with approval of the local bishops, Francis is exercising his “jurisdictional” powers. How could he exercise such a power over a schismatic priest?

By granting these faculties to the SSPX, the bishop went on to say, the pope is declaring “de facto, implicitly,” that “they are not schismatic.”

It is also worth noting that Bishop Vitus Huonder, a retired Swiss bishop from Chur, recently moved into a residence of the SSPX in Switzerland, with the pope’s explicit approval, a further sign that Francis does not consider them to be schismatic.

Huonder, in an interview earlier this year, said about the SSPX:

I recently visited the [SSPX] seminary at Zaitzkofen. I have seen the formation that the priests are receiving. I said then to the director: ‘Here we have a model for the Church. The leaders of the Church would do well to return to the formation that is given here, in the Society.’

As it seems, this bishop of the Catholic Church considers that the SSPX has preserved many gifts of the Church that other parts of the Church have abandoned. We should thank the SSPX for these gifts.

Now, here are some pertinent reasons as to why the SSPX is not in schism:

1. The SSPX is not in a schism since it recognizes all the dogmas regarding papal primacy while also recognizing the currently reigning pope.

Furthermore, in the Canon of the Mass, the SSPX mentions both the name of the currently reigning pope and the name of the local bishop of the diocese where the Mass is being celebrated.

The SSPX also occasionally prays publicly and solemnly for the reigning pope, chanting the “Oremus pro Pontifice nostro…” prayer, as an example.

2.  The not yet regularized canonical status of the SSPX is due not in first place to the disobedience or stubbornness of the SSPX, but to the extraordinary crisis of the Church, which is rooted in some very ambiguous doctrinal formulations found in various documents of the Second Vatican Council, in other post-conciliar documents, and especially in the promotion of doctrinal relativism by the Holy See itself, through interreligious and ecumenical meetings, events and documents.

3. Furthermore, the situation of the SSPX is due also to the existence of the Novus Ordo Missae, which in itself is a serious problem, since this official “ordinary form” of the Mass contains ambiguous and protestantizing elements, most notably in the new Offertory Prayers and in Eucharistic Prayer II.

4. This problem of ambiguity created by certain doctrinal statements found in both the Second Vatican Council documents and the Novus Ordo Missae, is not capable of being resolved by simply applying a hermeneutic, or employing the so-called hermeneutic of continuity, since the ambiguous formulations must be in themselves corrected or supplemented.

Prescient examples include the affirmation that we Catholics, together with the Muslims, adore the one true God, as is stated in Lumen Gentium 16,  as well as the aforementioned new Offertory Prayers and Eucharistic Prayer II.

5. Yet, to be granted full canonical recognition, the Holy See requires the SSPX, as an indispensable condition, to recognize the entire Second Vatican Council, including all its affirmations, as being part of the Catholic Tradition, in addition to recognizing the goodness of the Novus Ordo Missae.

6. The priests of the SSPX, because they are validly ordained, celebrate the Mass validly.

While from the formal point of view, they celebrate the Mass illicitly, because they are not incardinated in a diocese or religious institute currently recognized by the Holy See, the priests of the SSPX are not independent or vagabond, but depend on obedience from the superiors of the SSPX, who received some canonical faculties from the pope, and who maintain some contact with the Holy See and with some diocesan bishops.

7. As previously mentioned, the priests of the SSPX were granted ordinary faculty to hear confessions by Francis. Such a faculty cannot be granted on a habitual basis to a priest who is formally schismatic.

8. The Holy See has made it possible for the priests of the SPPX to receive faculties from a parish priest or local bishop to assist canonically matrimonies. Such a faculty, likewise, cannot be granted on a habitual basis to a priest who is formally schismatic.

9. In granting the SSPX the faculties of confession and of assisting canonically in matrimonies, the Roman Pontiff, as the supreme legislator, has given a de facto interpretation of the status of the SSPX, exempting the SSPX from the classification “schismatic,” and consequently preventing the application of can. 751 of the Code of Canon Law to the SSPX, which says: “schism is the refusal of submission to the Supreme Pontiff or of communion with the members of the Church subject to him.”

10. According to the words of the Holy See, it is not a sin to attend the Masses of the priests of the SSPX, unless it is done with the motivation “to separate from communion with the Roman Pontiff and those in communion with him” (cf. Letter from the Pontifical Commission “Ecclesia Dei,” dated January 18, 2003, reaffirming what the Pontifical Council for the Interpretation of Legislative Texts had already said, in its Explanatory Note dated August 24, 1996, n. 7).

11. If any Mass celebrated according to the “ordinary form” of the Roman rite would present a danger to the faith, by containing protestantizing rituals and doctrinal elements (e.g. liturgical abuses, heresies expressed in homilies, etc…) or by communion on the tongue being denied, it would be morally licit for a Catholic to attend the Masses celebrated by priests of the SSPX.

12. If a faithful Catholic personally experiences a deep spiritual faith life and a fruitful sacramental practice in a chapel served by priests of the SSPX, one should not consider this situation a sin and should not force this person to join a community with an officially recognized traditional Mass.

One should have in this case a wider pastoral approach, considering the extraordinarily grave crisis in the Church, while also taking into account the fact that the SSPX is not a schismatic community, neither in its own intention nor regarding strict canonical interpretation.