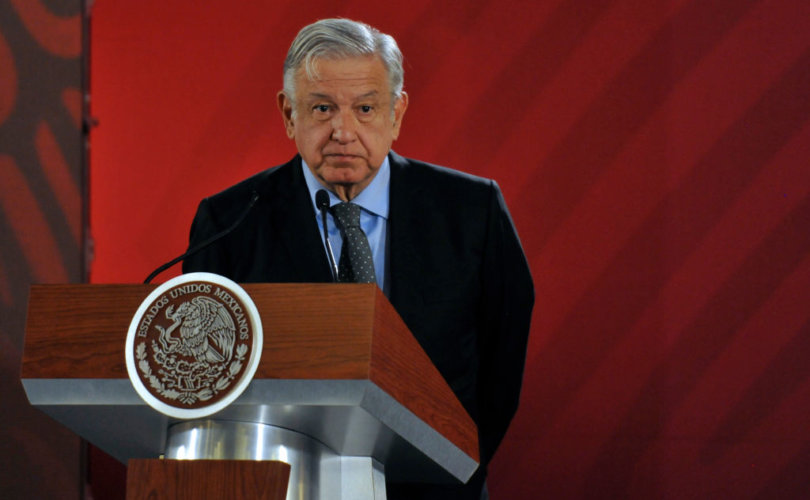 March 28, 2019 (LifeSiteNews) – It has been reported that the newly installed President of Mexico, Andres Manuel Lopez Obrador, has called on King Felipe VI of Spain and Pope Francis to apologize for the treatment of the native peoples of Mexico during and after its conquest in the 16th century. The proposal has already been rejected by the Spanish Government.

President Obrador is often viewed as a populist, and this demand certainly has the hallmarks of a publicity stunt. In a country ravaged by drugs cartels and corruption, which Obrador was elected, like all Mexican presidents, to oppose, it is very convenient to fix national attention on the crimes of five centuries ago, committed by institutions today represented by people thousands of miles away.

This is not to suggest that there were no wrongs committed by Spanish Catholics during the period of the Conquest, or that the right of the Spanish crown to conquer the area in the first place is straightforwardly correct. These are complex issues.

But demanding apologies does little to clarify these issues or to promote reconciliation. If they have any impact at all, such gestures tend to reinforce one stereotype at the expense of another, when a more nuanced view is necessary for a just historical appraisal. Part of that appraisal would be an acknowledgment that Europeans did not import the institution of slavery into some kind of ideal, peaceful community, but found in central America a society characterized by slavery, exploitation, and human sacrifice on an industrial scale. Another would be that at key historical junctures the Church, and indeed the Spanish crown, worked to improve the lot of enslaved peoples, even at the risk of provoking civil war with slave-owners.

After this lapse of time, not only is demanding an apology risking absurdity: so is offering one.

Pope Francis is, of course, the successor of Pope Alexander VI, who permitted the Spaniards to enslave the natives of New Spain, but that is not to say that Pope Francis is Alexander VI. He cannot repent of the personal sins of Pope Alexander; he can only repent of his own personal sins. If we say instead that Pope Francis should merely acknowledge that those sins took place, this would have only the weight of his personal opinion as someone who had examined the historical evidence. It might be a reasonable judgment, but it would have no legal or theological significance.

Such considerations caused many to question the appropriateness of some of Pope John Paul II’s numerous apologies. Since then, however, conditions have changed markedly in ways which make further apologies even more problematic: namely, the growth of the culture of competitive victimhood.

The status of the ‘historically oppressed’ has taken on an importance today which will no doubt baffle historians a century from now. It appears to confer rights and privileges upon certain people regardless of their current wealth or political power, and to remove rights from others, however vulnerable, like the Covington school-children. Anything which encourages or validates the hierarchy of victimhood, which is promoted in a wholly opportunistic way by left-wing activists, should clearly be avoided, as this is an inherently unjust project.

On the other hand, reparation for sins, even the sins of others, can be appropriate when apologies are not, and such a response would be a truly Catholic answer, especially to crimes which continue to bear directly on people alive today. Reparation can be made equally by descendants and representatives of the sinners and of the victims, and in this way it unites them in desiring to heal the past, rather than reinforcing division and resentment.

The concept of reparation is, of course, wholly foreign to modern political culture, as it re-focuses our attention to the offense done to God. God is the ultimate avenger of sins, and unlike the human agents who populate the historical narrative, it is the very same God who will judge the living and dead at the end of time as the God who judged the crimes of Aztecs and Conquistadors alike at the moment of their deaths. We should offer our penances and good works to God, to make up for the historic crimes of members of the Church, and of our predecessors in our national histories.

God alone has the ultimate power to heal our communities.

Something else in danger of being obscured is apology, and indeed, where appropriate, punishment, for sins of the more recent past, where the perpetrators are still alive. It is so much easier and less painful to acknowledge the crimes of others than it is to face the reality of one’s own sins, and their consequences.

The clerical abuse crisis is in part a crisis of people in leadership positions refusing to fulfill their obligations towards victims, including many of the most vulnerable people in society. Many of these leaders, both clerical and lay, are not only still alive, but in office. If we wished to right historical injustices, those in which large numbers of wrongdoers are still able to repent in a meaningful way, for their own sins, would be a better place to start, than in the condemnation of soldiers and missionaries from five centuries ago.