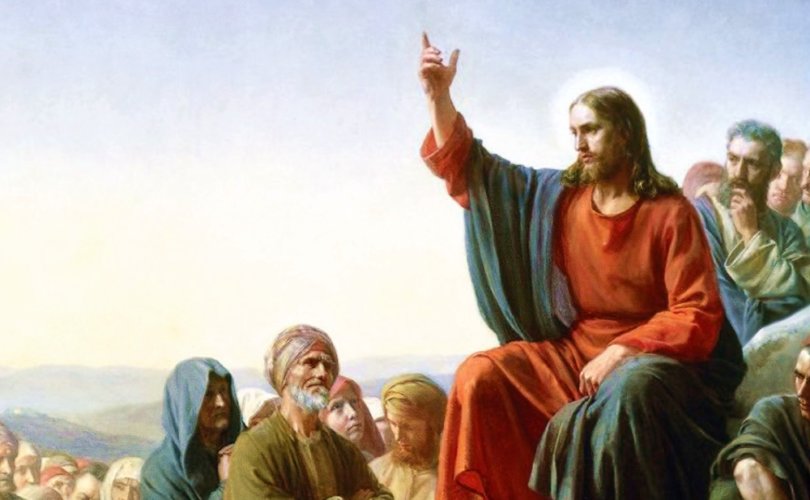 Sermon on the Mount by Carl Bloch.

April 17, 2018 (LifeSiteNews) – In the April 2018 issue of First Things, Richard Rex, professor of Reformation history at the University of Cambridge, writes the following sobering words (in the course of his review of Ross Douthat’s new book To Change the Church: Pope Francis and the Future of Catholicism):

What we might bear in mind, if we are disturbed by the policies of the leaders of the Church in such a situation, is that the duties of conscience apply just as much to our relationship with the Church as to our relationship with the state. If our leaders fail, then we should criticize, appropriately and helpfully. If they need to be reminded of the truths that have been entrusted to them, then it is our duty to remind them. There may well be, there certainly will be—as there certainly have been only too recently—abuses within the Church and failures by its leaders. Faith in the one, holy, catholic, and apostolic Church requires us to soldier on, minding our consciences, upholding the truth out of love, and avoiding evil and false doctrine.

It is refreshing to find someone speaking the simple truth: given fallen human nature and the many temptations of the world, the flesh, and the devil, the clergy—from the Sovereign Pontiff all the way down to the least parochial vicar—can and will fail, sometimes dramatically so.

It is undoubtedly Rex’s training as an historian that makes this claim not only uncontroversial but transparently obvious. I have often thought that the greatest gap in the education of Catholics today is history. If we do not study, for example, the Arian controversy or the Reformation and Counter-Reformation period, we will not be aware of the extent to which the Church on earth can become confused, corrupted, disoriented, and acutely in need of reform—the right kind of reform, which, as Martin Mosebach reminds us, means returning to form, recovering the form God intends for His Church. This form includes perfect adherence to the doctrine contained in Sacred Scripture and in Sacred Tradition, as it has been taught through the ages by shepherds exercising the charism of truth.

Rex continues his analysis with a reductio ad absurdum, a “what if” argument that leads to an impossible conclusion:

If, however, the Catholic Church were indeed to abandon or reverse the almost total opposition to divorce that it has maintained across two millennia, then its claim to be the privileged vehicle of divine revelation on moral issues would be, quite simply, shattered. The position of the Church on the indissolubility of marriage is among the most consistent of its traditions. Its scriptural basis is, frankly, stronger than that for the doctrine of the Trinity, for the observance of Sunday as the day of rest, or for the real presence in the Eucharist. To all intents and purposes, it is a mark of the Church. Nor should this claim be theologically surprising. Marriage, as Paul taught, symbolizes the union of Christ and his Church (Eph. 5:31–32). For Christians, the indissolubility of marriage is integral to its symbolic—that is, its sacramental—place in the economy of salvation. If it is terminable, then it can no longer symbolize that perfect union between the head and the body of Christ.

While I’m not sure I understand why Rex says “almost total opposition to divorce”—the Church has never accepted or tolerated divorce but has always branded it a sin when chosen (rather than when merely suffered)—he is absolutely correct to say that few other moral teachings are clearer or more consistent from the very beginning until the past few tempestuous years. Christ’s uncompromising teaching on remarriage-as-adultery is so clear, in fact, that adherence to it is a veritable mark of the true Church, while deviation from it is, all by itself, an indication of heresy, a deviation from the Way, the Truth, and the Life.

Rex insightfully points out that the very sacramentality of marriage, that is, its elevation by God to a grace-bearing sign of the indissoluble union of Christ and the Church, is undermined the moment one calls into question its God-given indestructible permanence. This is true even if one pays lip-service to that permanence but connives at sexual liaisons outside of the original bond and rewards them with admission to the sacraments.

In his final paragraph, Rex delivers the coup de grâce:

If, after all, marriage is not a divine union of male and female in one flesh, dissolved only by the inevitable dissolution of that flesh in death, then the Catholic Church has, in the name of Christ, needlessly tormented the consciences of untold numbers of the faithful for twenty centuries. If this teaching were to be modified in the name of mercy, then the Church would already have been outdone in mercy not only by most other religions but even by the institutions and impulses of the modern secular state. Such a conclusion would definitively explode any pretension to moral authority on the part of the Church. A church which could be so wrong, for so long, on a matter so fundamental to human welfare and happiness could hardly lay claim to decency, let alone infallibility.

The irony is poignant: the neo-ultramontanism that endows every papal word and judgment with infallibility is sawing off the very branch on which it rests. If couples in irregular (i.e., anti-sacramental and adulterous) marriages are, after a period of consultation and “public penance” (whatever that means, when there is no intention to live in chastity), allowed to receive sacraments without foregoing their adultery, then not only is papal infallibility itself fatally compromised, but the very foundations of the Catholic Faith are destroyed.

It is to Rex’s credit that he sees and diagnoses without flinching what so many others blithely ignore or sweep under the carpet. If the Buenos Aires guidelines that permit the above scenario were true, the Catholic Church has been a moral monster worse than anything Protestants have ever imagined, for she will have been demanding for two thousand years a standard of holiness that is not only impossible but unnecessary and even contrary to human flourishing.

Fortunately, this nightmarish conclusion is easily avoided. To the extent that the Buenos Aires guidelines permit what the Church has always forbidden as a matter not of human law but of divine law, they are false, and any true Catholic will reject them without hesitation.