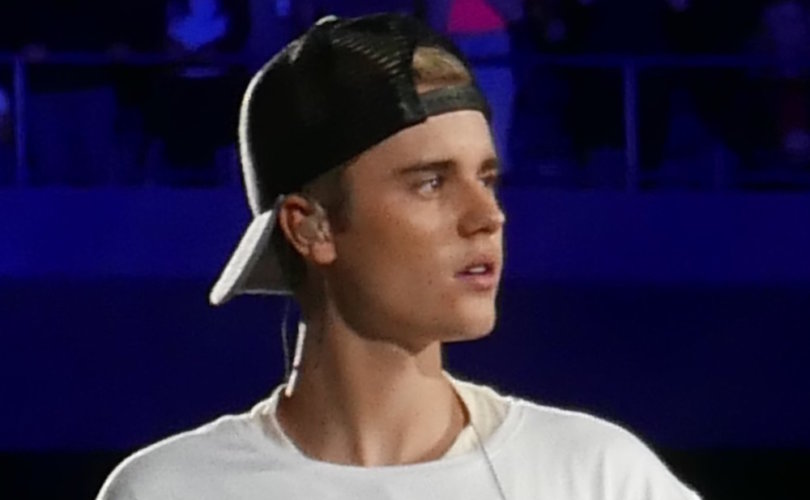 February 14, 2019 (LifeSiteNews) – In a very candid interview for Vogue, Justin Bieber explained that he abstained from sex for one year, wanting to get closer to God. He also said that he and his new wife Hailey Baldwin saved sex for marriage, which is one reason they got married so quickly.

Not surprisingly, his interview has generated a torrent of comments, both positive and negative, including an article critical of Bieber’s call to abstinence.

But why get mad at him for encouraging self-control? Why criticize a positive example? Or is his example really positive?

On the conservative Christian side, it’s easy to throw stones. “Justin and Hailey are hardly models of Christian purity! And were they so lacking in self-control that they rushed into marriage?”

I totally understand those concerns and I don’t dispute them. But rather than condemn, how about we encourage?

First, let’s put things in context. A young pop icon like Justin Bieber has more beautiful women throwing themselves at him every day than most males will meet in a lifetime (or 100 lifetimes), let alone have these women offer themselves to them. For him to stop sleeping around is a lot bigger deal than it may seem.

Second, let’s not underestimate the amount of influence he has.

Kids emulate his every move. What he does is cool. Maybe they’ll copy him here too? Even if some young people say to themselves, “If he can do it, I can do it,” that’s positive.

Third, he realized that if he wanted to get serious with God, he could not engage in sexual immorality. (Again, I’m not suggesting we parade him as the ideal model. I’m simply saying we encourage what is positive.)

For many today, “God” can be added to virtually any endeavor, be it gambling or prostitution or fornication or adultery.

Just add “God” in, and He’ll make everything better.

He doesn’t mix well with sin, and He certainly doesn’t bless sin.

He does, of course, save from sin, but that’s the whole point. To be saved from sin is to leave it behind. To put it in the rearview mirror without looking back. To be saved is to be changed, even if not perfectly.

Fourth, Paul himself taught it was better to marry than to burn (meaning, with lust; see 1 Corinthians 7:9). So, if this young couple felt they could not control themselves but they did want to spend the rest of their lives together, then marriage was better than fornication.

But they’re not the first to push their wedding date up, and, given today’s climate of casual sex, their example can encourage others to follow suit. (And for the oft-maligned pastors of Hillsong, to whom Justin and Hailey look, should we not credit them with having some positive influence here too?)

As for non-conservative critics of Bieber, a headline in the UK Telegraph proclaimed, “Celibacy before marriage is a terrible idea – Justin Bieber shouldn't preach it to his fans.”

Perhaps you’re rubbing your eyes or saying out loud, “What in the world?” I don’t blame you.

But Rebecca Reid, who penned the column, is sure: “As far as I’m concerned, before you marry someone, you need to do four things. Go on holiday for at least a week, see each other through an illness (bonus points if its food poisoning), build something flat pack and have sex.

“Sex is a vital part of a marriage,” she writes. “And the only way to know if you’re going to have good sex is by trying it out.”

Yes, “try it out.” Kind of like test-driving a car.

And that leads to some obvious concerns.

Does anyone hear the words “degrading” or “used”? And how many times do you try the sex before concluding whether it will work for you or not?

Second, there’s a lot more to marriage than sex (a whole lot more). Not only so, but sexual intimacy can flow naturally out of emotional intimacy, and couples can grow and learn.

Third, when you marry, you make a lifelong commitment, whether the sex is good or not.

From Reid’s perspective, in order to make a solid, lasting commitment, a couple needs to experience life (and sex) together. The fact is that when two people truly love each other and commit themselves to each other, other things will fall into place.

Reid also claimed that there’s no real evidence that people who abstain from sex before marriage are more likely to stay together.

But, as I documented in Saving a Sick America, on average, couples who live together before wedlock have less stable marriages than those who don’t live together before wedlock. And that’s why, “A new study has found that women with between zero and one sexual partner are the least likely to divorce later on, with women who had 10 or more partners emerging as the most likely to see their marriages end, according to the Institute for Family Studies.”

In the Vogue interview, Justin said, “I think sex can cause a lot of pain. Sometimes people have sex because they don’t feel good enough. Because they lack self-worth. Women do that, and guys do that.”

He also explained, “I wanted to rededicate myself to God in that way because I really felt it was better for the condition of my soul. And I believe that God blessed me with Hailey as a result. There are perks. You get rewarded for good behavior.”

It’s true. We do reap what we sow (see Galatians 6:7-8). And God does reward purity and honor.

I’m personally praying for Justin and Hailey to come to know the Lord in an even deeper way, to experience an even more profound life transformation, and to set an even higher example.

But I appreciate the steps they have taken, and I’m praying their marriage endures and stays strong.