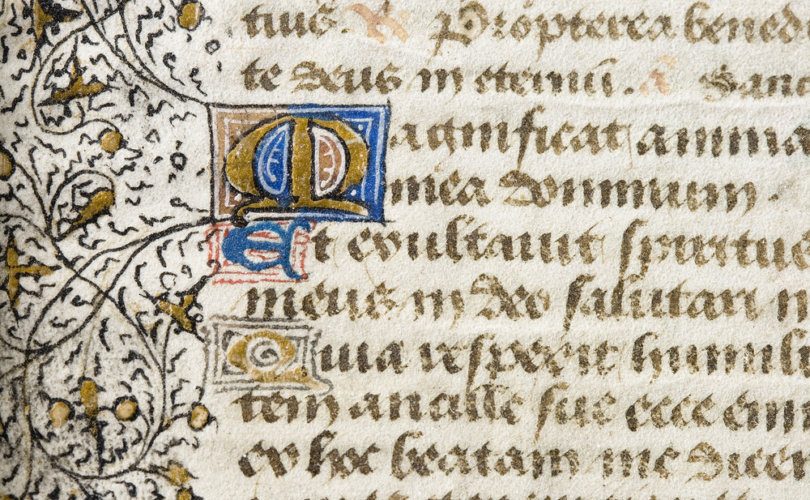 Detail of an illuminated manuscript containing a portion of the Magnificat.

November 19, 2018 (LifeSiteNews) – We will understand better why Latin is the correct and fitting language of the Roman Catholic liturgy if we begin with a truth everyone knows from experience. Any time a language is spoken, it is spoken in what linguists call a “register,” which means a level of formality, polish, or sophistication, ranging from rough, casual, or slangish at the lower end, to intricately-wrought poetic diction at the higher. Individuals can use their native language in various “registers” depending on circumstance and education. Analogously, we may say that languages as such present themselves in different “registers.”

At the lowest level are slang and pidgins (a pidgin is defined as a “grammatically simplified means of communication that develops between two or more groups that do not have a language in common: typically, its vocabulary and grammar are limited and often drawn from several languages”).

Higher up are ordinary vernaculars. A notable difference at this stage is that linguistic expectations are significantly higher in regard to usage, pronunciation, grammar, style, and so on. What people get away with in slang is not “allowed” in many everyday contexts.

Higher up still are so-called prestige languages. Of course, these are native languages for some people, but they are chosen as second or third languages by many others due to their reputation. French has been a prestige language for over a thousand years. For many centuries Latin was a prestige language in Europe, as Classical Greek was for the Romans. Note that linguistic expectations here are even higher, as these languages are supposed to be a sign of education, culture, urbanity. A 19th-century Russian spoke French to show that he was cosmopolitan and upper-crust.

Higher up still, and with the highest level of expectations, are reserved languages. The examples that come to mind were all prestige languages at one time, and now their use is almost entirely for religious purposes: Hebrew, Classical Greek, Latin, Syriac, Old Church Slavonic, and outside of Christianity, Sanskrit and Quranic Arabic. These languages are revered because they are languages in which we express our reverence; they have become reserved to (or at any rate specially associated with) sacred contexts.

Language is not merely a matter of practical communication; it is also an embodiment of thought and a work of art, a very high expression of our rationality, spirituality, and transcendence. People do not write poetry, for example, just for practical reasons. Part of what makes a prestige language prestigious is the depth, subtlety, and amplitude of expression found in it, owing to its rich history; and this is even more true of reserved languages, which, having been prayed with for centuries or even millennia, are saturated with sacral associations. The language has, in a sense, fused with the action, the rite, the content. It has itself become a symbol supporting and adorning other symbols.

Having grasped these distinctions, we see that the transition of Latin from being a vernacular to being a prestige language to becoming finally a reserved language is a natural one, paralleled by other languages, in a phenomenon seen throughout the world and throughout history.

Now, when a sacred liturgy is already conducted in a reserved language, any change from it is probably going to be a step down linguistically—perhaps a big step down, as we would normally be looking at “vernacularization,” which by definition is a lower register.

Latin is a crucial part of Catholic Tradition—not alongside it, but within it; indeed, it is that by which Tradition was transmitted in the Western world. Even if modern people all agreed that Latin should be abolished completely, it would not cease to be part of Tradition: this is an unarguable and unchangeable fact. We might compare it to celibacy. The ecclesiastical law that a priest cannot marry derives from Tradition. Nowadays many “experts” say they “know” that celibacy is responsible for low numbers of priests. Next to priesthood for women, celibacy is a favorite target for modernists, and every “modern” Catholic is supposed to be opposed to it. Yet it is part of Tradition, and as such irreversible. Latin is very similar to celibacy in this regard. While it is used in the liturgy not by divine law but by Church law, it nevertheless is part of Tradition (as are Greek, Slavonic, Syriac, Armenian, etc., for the Eastern churches) and should therefore be preserved, regardless of our personal modern opinions.

The error that led to the abolition of Latin was neoscholastic and Cartesian in nature—namely, the belief that the content of the Catholic Faith is not embodied or incarnate but somehow abstracted from matter. Thus, many Catholics think that Tradition means only some conceptual content that is passed down, irrespective of the way in which it is passed down. But this is not true. Latin is itself one of the things passed down, together with the content of all that is written or chanted in Latin. Moreover, the Church herself has recognized this point on a number of occasions in singling out Latin for special praise and recognizing in it an efficacious sign of the unity, catholicity, antiquity, and permanence of the Latin Church.

Latin thus possesses a quasi-sacramental function: just as Gregorian chant is “the musical icon of Roman Catholicism” (Joseph Swain), so is Latin its “linguistic icon.” Liturgical reformers in the grip of rationalism treated Latin like a mere accident, as if it were the dispensable packaging of a product. In reality, it is more like the skin of a person. The skin is superficial, but if you take it away, the result will be an ugly mess.