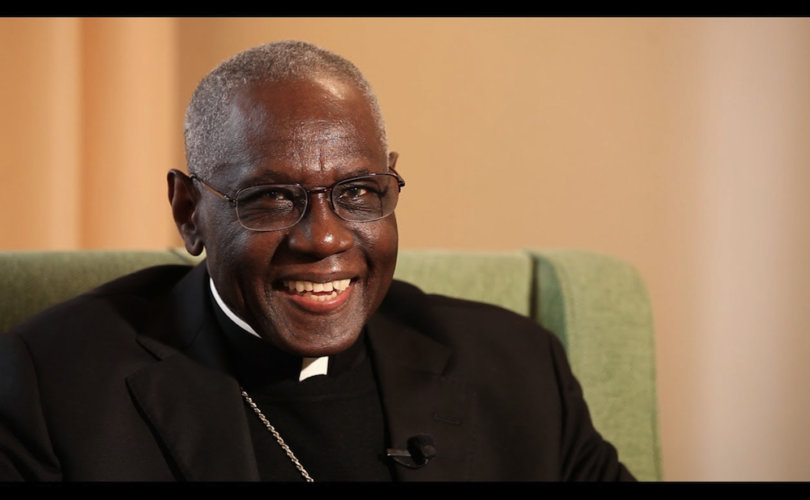 October 24, 2017 (LifeSiteNews) — Left-leaning Catholic clergy and scholars were delighted to see Pope Francis for the third time putting his foot down on Cardinal Robert Sarah.

Like sharks at a feeding frenzy, openly liberal Catholics tore strips off the African Liturgy chief after news broke Sunday morning that Pope Francis had corrected his attempt to interpret the Pope’s liturgy reform in an orthodox manner.

Sarah, Prefect of the Congregation for Divine Worship and the Discipline of the Sacraments, had claimed in a recent article that the pope's new directives on the Liturgy, titled Magnum Principium, did not allow bishops’ conferences, but the Vatican, to have the final word on Mass translations. He was simply reading the Pope’s directives through the lens of a 2001 instruction titled Liturgiam Authenticam.

But the Pope told Sarah that those norms had been abrogated and that the Cardinal had misunderstood the Pope’s directives.

Liberal Catholics and the news sources they controlled smelled blood and immediately struck out at the Cardinal.

Commonweal contributing editor Massimo Faggioli said he didn’t “remember a cardinal prefect in the Roman Curia in need of such public and constant corrections.” La Croix editor Robert Mickens likely spoke on behalf of all when he wondered “why doesn't Pope Francis just remove Cdl Sarah from his post?”

The naysayers of orthodoxy know that despite Pope Francis’ talk of “mercy,” “dialogue,” and not liking to “cut off heads,” he is ruthless when it comes to removing those from high posts with whom he disagrees, as in the cases of Cardinal Raymond Burke and Cardinal Gerhard Müller. They suspect Cardinal Sarah’s time is winding down swiftly.

Two other occasions where the Pope put his foot down on Sarah — to the delight of the Cardinal’s critics — include when the Cardinal delayed in implementing the Pope’s request that women be included in the Holy Thursday foot-washing ceremony, and again after the Cardinal requested priests to begin celebrating the Mass ad orientem (facing the east).

Why is it that, as First Things editor Matthew Schmitz writes, “a growing crowd wants Cardinal Robert Sarah’s head on a platter”?

It’s likely because left-leaning and dissident Catholic clergy and scholars see Cardinal Sarah as a major threat to their vision for the Catholic Church that has suddenly seemed achievable under the Francis pontificate.

And their fears are not unfounded.

Sarah has risen from humble beginnings in a remote Guinean village to become a tower of orthodoxy in the Catholic world. A number of faithful Catholics are beginning to wonder if an African Pope might be a solution to the Church’s crisis.

In his recent book, The Power of Silence, the Cardinal makes it clear that the Church is in crisis.

“The Church today is going through unprecedented exterior and interior trials. Something like an earthquake is seeking to demolish her doctrinal foundations and her centuries-old moral teachings,” he wrote.

He said he opposes shepherds within the Church who no longer believe in the Bible and who depart from Catholic teaching and sacred tradition.

“I will untiringly denounce those who are unfaithful to the promise of their ordination. In order to make themselves known or to impose their personal views, both on the theological and the pastoral level, they speak again and again. These clerics repeat the same banal things. I could not affirm that God dwells within them,” he wrote.

Sarah wrote that “Bishops that scatter the sheep that Jesus has entrusted to them will be judged mercilessly and severely by God.”

The Cardinal has warned elsewhere that the Church is currently facing a “grave risk” of schism over morality; he has told priests that they cannot shy away from the “hard” teachings of the Church on abortion and homosexuality; he has rebuked pro-homosexual priest Fr. James Martin for getting the Church’s teaching wrong on homosexuality; and he has called Catholics to “revolt” against the new lies that attack traditional family values.

Because he has boldly spoken the truths of the Catholic faith, Cardinal Sarah is now treated as one of the most dangerous men in Christendom.

His critics have outlined their fears of what would happen to the new “openness” in the Church if Sarah were to become the next pope.

But through all the gossip, slander, and public humiliation Sarah has received for holding fast to the Catholic faith, he has uttered no word in his defense. He is like the proverbial lamb led to the slaughter.

He has found power in silence.

But a glimpse into his anguish can be gleaned from a passage in his The Power of Silence.

“I painfully experienced assassination by gossip, slander and public humiliation, and I learned that when a person has decided to destroy you, he has no lack of words, spite and hypocrisy; falsehood has an immense capacity for constructing arguments, proofs and truths out of sand,” he wrote.

“When this is the behaviour of men of the Church, and in particular of bishops, the pain is still deeper. But … we must remain calm and silent, asking for the grace never to give in to rancour, hatred and feelings of worthlessness. Let us stand firm in our love for God and for his Church, in humility,” he added.

Liberal Catholics are baying for the blood of Cardinal Sarah because they cannot bear to have someone who is standing firmly in the way of their agenda for the Church. But the blood of the faithful has always been the seed of the Church. And whether Sarah faces a white or red martyrdom, it will be no different in this case or in any other.

Cardinal Sarah reflected in a homily two months ago that to be a faithful Catholic today precisely “means martyrdom.”

“Who shall stand up today for God? Who shall dare to confront the modern persecutors of the Church? Who shall have the courage to arise, armed only with the rosary and the Sacred Heart, to face the columns of death of our times, as are relativism, indifferentism and the contempt of God? Who shall tell this world that the only liberty worth dying for is the liberty to believe?” he said.

“My brothers … we are called today to witness, which means martyrdom!” he added.

Cardinal Sarah calmly faces his accuser with dignity and with silence because he knows that no matter what happens, as Pope Emeritus Benedict recently said, “the Lord wins in the end.” Sarah knows that the Lord’s followers are simply called to be faithful in all things, to have the attitude of “God, or nothing,” as expressed in the title of his previous book.

As Sarah said in his August homily: “When it comes to God, there can be no compromise!”