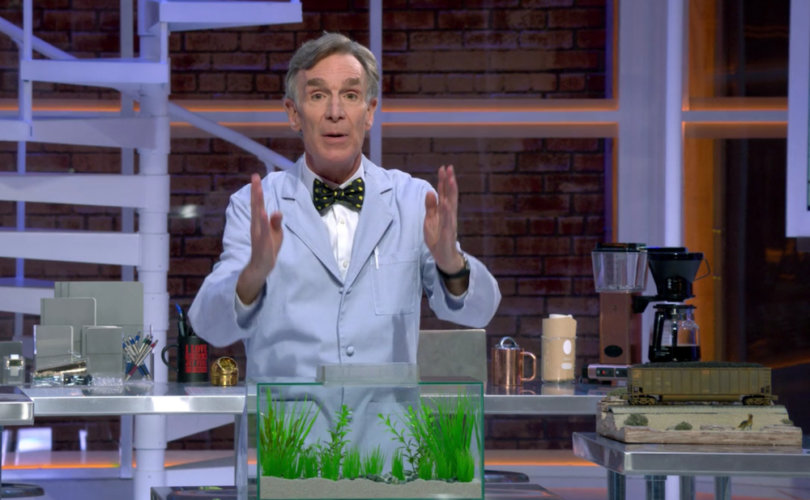 June 8, 2017 (LifeSiteNews) — As a rule, I don’t write about issues I feel ill-equipped to analyze. For years, one of those issues has been climate change, a hot topic for both progressives — who wish to utilize taxes (and what else?) to solve this problem — and conservatives, who are at the very least suspicious of the solutions being put forward. Since Donald Trump decided to pull the United States out of the Paris Climate Agreement to great lamentation and swooning on the progressive side, Twitter has lit up with panicked progressives asking a very reasonable question: Why are conservatives so suspicious of climate change?

I know very little about climatology, and thus have no educated opinion on whether or not climate change is the threat that progressives claim it is. But I can explain where conservative skepticism comes from, and so perhaps my progressive friends will find that helpful.

First of all, progressives spend a good deal of their time berating those who do not share their opinion on the apocalyptic nature of climate change for being “science deniers,” a phrase obviously modeled on the label “Holocaust deniers” and calculated for the same effect. But the problem is that progressives have absolutely no credibility on this file, and it rather looks like they only cling to science when they find it convenient. As Sean Davis put it on Twitter as the caterwauling over the Paris pullout began: “If you can’t tell me how many genders there are or when human life begins, I’ll kindly pass on your theories about the weather next century.”

That might be glib, but it’s precisely how conservatives feel. There is an iron-clad scientific consensus on when life begins — conception — but progressives suddenly morph into ignorant science deniers when the topic of human life in the womb — life, by the way, that is actually observable — comes up. And why is that? Because admitting the obvious fact that human life in the womb is human life would do damage to the secular sacrament of abortion. That is why Bill Nye the “Science Guy” muses aloud that there should be a punishment for people who have “extra kids” due to the familial carbon footprint but also releases idiotic videos defending abortion, with nary a scientific fact to be seen.

The same is true with the new gender-bender craze, with some social revolutionaries now claiming there can be up to 50 genders or sexual identifications, and the trend of absolute self-determination — people identifying as animals or even as children — has begun. Academics who disagree — such as psychologist Dr. Jordan Peterson — are pilloried as hateful bigots and told that their disagreement actually constitutes genuine violence. This seems like a good scenario for a cool-headed Science Guy armed with facts to show up — especially one like Bill, who once explained exactly how gender is scientifically determined! Well, too bad. Bill Nye the Science Denier Guy actually had previous videos of him explaining gender taken down, since he is now releasing weird music videos claiming that gender is fluid and that you can have sex with whoever or whatever you want, because that is normal, apparently.

On abortion, transgenderism, the mounting harmful health effects of the birth control pill, you name it — progressives deny it if it doesn’t suit their ideological agenda. And so when they come out bristling with the righteous indignation of a cat doused with a bucket of water over a climate change agreement, conservatives tend to be suspicious. Why do they suddenly want to use science as a cudgel? Why is this issue in particular so important to them? Why do they ignore observable embryology but obsess over theoretical climatology?

And the answer many conservatives stumble on is a simple one: Climate change is a very convenient problem for progressives. The solutions they are advocating are solutions they have been advocating to every problem and at every opportunity for decades. As Addison Del Mastro put it over at The American Conservative: “From a conservative point of view, climate change looks like too good a problem for liberals. Everything liberals want, or that conservatives think liberals want — more regulation, more control of the economy, more redistribution of wealth, skepticism or hostility towards capitalism and of America’s status as an affluent superpower — are suggested or required by the reality of climate change. The conservative sees liberals rubbing their hands together at the prospect of a problem that needs such solutions, and he thinks, ‘No, such a perfect problem couldn’t ‘just happen’ to arise — it must be invented or massively overstated.’” Does anyone think that if a new ice age was being predicted, progressives wouldn’t come up with some way to tax us for that, too?

Progressives don’t just want more rules and regulations. They want to restructure the global economy based on a scientific track record of perpetually predicted apocalypses that persistently fail to come to pass. The boy who cried wolf is getting a bit hoarse, and surely I’m not the only one who noticed that those predictions that failed — like Paul Ehrlich’s dire warnings about a “population bomb” — have now been resurrected by the progressives in the climate change debate. People create carbon dioxide, carbon dioxide is killing us, therefore people are bad and must be killed. Fortunately, we have International Planned Parenthood and the science-denying phalanx of progressive apologists who work overtime to protect them from scrutiny to help us with that.

There is also the fact that our enlightened leaders do not treat climate change with the same solemnity when it comes to their own lifestyle choices. I know, I know — Leonardo DiCaprio’s predilection for private planes says nothing about the accuracy of current climate models and predictions. But it does say volumes about what DiCaprio actually believes about climate change. His carbon footprint can be enormous, because he is a Special Person not subject to the same rules and regulations as the rest of us. That’s why stretch limos were left idling and coughing their fumes into the atmosphere outside the Paris Climate Conference, where elitists who live in gated communities discussed what sort of tax burden would be levied from the unwashed pick-up truck-driving masses. As always, progressives talk about fending off climate change to save the poor and the middle class, while coming up with solutions that will destroy the middle class. After all, it’s not like Justin Trudeau’s trust fund is going to evaporate like the small businesses hit hard by new taxes.

I’ll reiterate: Climate science is not my wheelhouse, and therefore I’m not equipped to analyze the climate models some scientists tell us predict our doom. But I can tell you why conservatives are so suspicious: It’s because progressives who consistently deny science when it is inconvenient for them, demonize those who disagree with them and insist there is no debate to be had, refuse to personally live like climate change is the threat they claim it is, and propose the economic restructuring and extra taxes they always wanted in the first place as the solution, simply don’t have much credibility. Not to mention the fact that a movement that tells people to stop having kids while demanding we save the globe for our kids should really get their talking points straightened out. A bit of consistency would buy a lot more credibility.