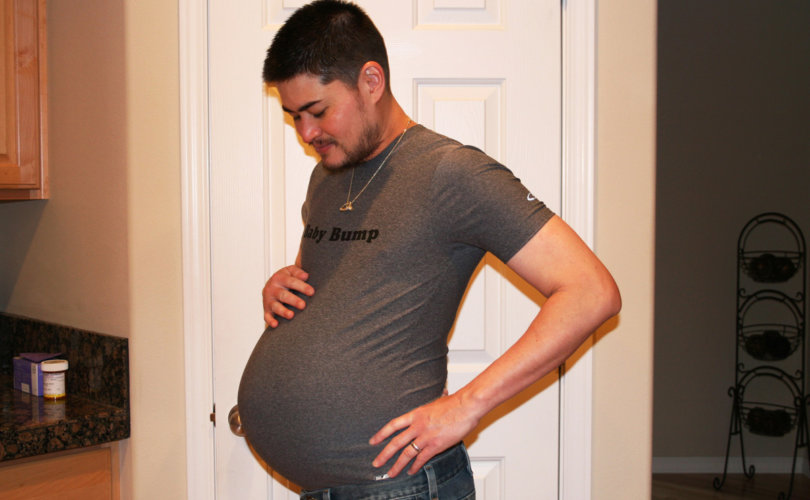 Tracy Beatie, who now goes by 'Thomas', has made headlines as the so-called 'Pregnant Man.'

July 30, 2018 (LifeSiteNews) – Several times over the past year or two I’ve written columns noting that there is a growing backlash to the transgender movement. Much of their ideology is simply too radical for ordinary men and women to accept, and as such trans activists have relied on the institutions where they have accrued power—progressive political parties, academia, and the media—to push and enforce their agenda. But despite this, their ideas have not actually gained as much traction in the broader population as their cultural clout might suggest.

Let’s do a thought experiment and go through a few questions so I can illustrate what I mean. Think about the people you know—the ordinary men and women you work with, for example (this does not apply if you happen to work at a university.) Consider how those people—that is to say, normal, average people—would answer these questions, or how many of them would pass muster in the eyes of trans activists currently engaged in a cultural revolution.

In some places—New York State, for example—it is illegal to “misgender” someone or refuse to use their “preferred pronoun.” These pronouns include words like “co,” which becomes “coself,” “ey,” which becomes “emself,” and “xie,” which can be translated to “hirself.” There are now dozens of others, and lists of these invented pronouns continue to evolve.

Now, the questions: Do you know a single person who can actually list off more than a few of these pronouns? And how many people do you know who would not be able to list any of them? I’ve worked at a lot of different places—construction sites, landscaping crews, a fencing outfit, a greenhouse operation. In not a single one of these places would any of the people I worked with have been able to come up with the pronoun “xie,” much less conjugate it to “hirself.” The simple fact is that these words only exist in an elitist bubble, but are virtually unknown by the rest of the population.

Another question. Trans activists now claim that there are many genders beyond simply male and female, and the elites are dutifully falling into line. One activist says there is more than 60 different genders, and Facebook offers over 70 gender options for its users. But think about it for a moment: How many people do you know who can list off more “genders” than male or female? Or how many people can even say how many genders there are at the moment, according to our current cultural overlords? Answer: Probably none.

Of course, there are many advocates of gender fluidity who have moved beyond gender entirely and claim that many people are “non-binary.” A “non-binary” person is apparently neither male nor female, and so can identify as “neither,” pick whatever pronoun he or she wants, and insist that they be recognized by society as some sort of androgynous “in-between.” Question: How many people do you know who would recognize the term “non-binary,” or would be able to explain this gender incoherence coherently?

And then we have the “bathroom wars,” with trans activists insisting that people should be able to traipse into whichever bathroom they like, depending on how they identify. This means that biological males in possession of fully functioning penises can (and do) get access to female bathrooms. How many average moms and dads do you know who would be comfortable with allowing their daughter in the same bathroom as a man? (Questions like this reveal the immediate limits of ideological colonization: People will accept virtually anything until it affects themselves or people they love.)

I point these things out to emphasize one very important point: As Gabrielle Kuby, author of the magnificent book The Global Sexual Revolution: Destruction of Freedom in the Name of Freedom, told me in a recent interview, these ongoing cultural revolutions are not like revolutions of the past. They are not revolutions by the people, for the people. They are not the populist uprisings of people demanding change. These cultural revolutions are top-down: Progressive politicians, select academics, and cowed journalists might accept the ideologies of gender-fluidity, but the average working man and woman still find much of this stuff to be insane when they are confronted with the beliefs and implications of gender fluidity.

These ideas are being imposed on us, not demanded by us. Trans activists are demanding that the people accept their ideas. Trans activists claim that they are championing a new understanding of gender, but it is as of yet largely confined to the elites. They say that language evolves, and that trans pronouns will be ubiquitous in no time—but not even their political allies know most of these recently invented words. Despite the lighting-fast speed at which their cultural revolution has progressed, trans activists have not actually accomplished much at the grassroots level.

I suspect they know this, which is why they try so hard to force their ideologies into the schools, where they can indoctrinate the children of the working class men and women who have far too much common sense to accept their ridiculous ideas. As always, this battle will boil down to a fight for the hearts and minds of the next generation.