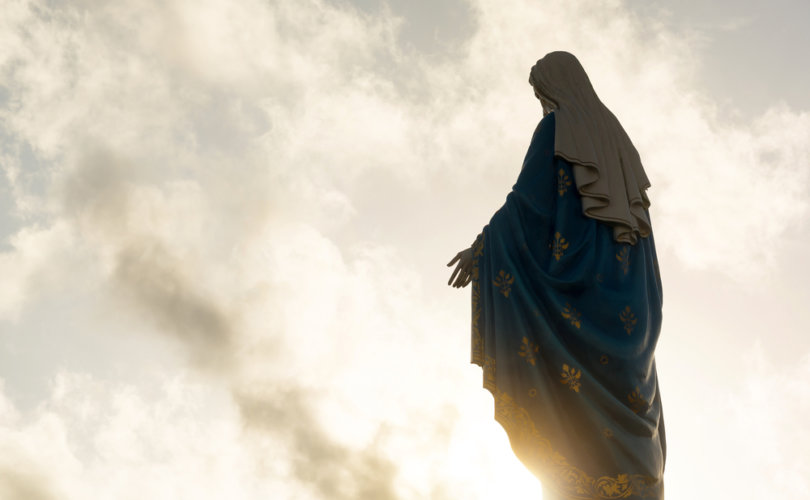 EDINBURGH, Scotland (LifeSiteNews) — There was a stir yesterday as some English-speaking Catholics noticed that the original prayer for the consecration of Russia and Ukraine has a title for Mary that doesn’t look at all like the “Queen of Heaven” in the English version.

The mysterious name or, to be precise, metaphor is “terra del Cielo” in Italian, the language in which Pope Francis consecrated Russia today. “Terra del cielo” is literally “earth of heaven,” which was certainly a novel image. Mary is earth of heaven? Land of heaven? Dirt of heaven? What?

But the clue is in the quotation marks — if you look, you will see that “terra del Cielo” has quotation marks, unlike stella di mare (star of the sea) and arca della nuova alleanza (ark of the New Covenant). This, to me, is an invitation to find out who first called Our Lady “earth of heaven” and why they did so.

I found two interesting sources online right away. The first was a haunting recording of an Italian choir singing a hymn called “Maria, Terra del Cielo” to Our Lady. A subtitle says that the melody is Serbian:

My English translation of the lyrics is: “Holy Mary, mother of the Lord, your faith guides us. Turn your gaze towards your children. Earth of heaven, the way is long, and the night is falling upon us. Intercede with Christ, Earth of heaven.”

When I looked for the source of these lyrics on the internet, I found a 2005 reflection in L’Avvenire by Cardinal Gianfranco Ravasi, who has been the President of the Pontifical Council for Culture since 2007. It begins with the lyrics of “Maria, Terra del Cielo”

In 2005, Ravasi, not yet a bishop, let alone a cardinal, was still the Prefect of the Ambrosian Library, a scholarly treasure-trove in Milan. He is, and was, also a noted scholar, a classicist, an expert on the Old Testament and, in his younger days, something of an archaeologist. Therefore, I was delighted that he had something to say about “terra del Cielo”, and it is this:

In Jerusalem, pilgrims visit the only Gothic church that remains intact: the basilica of Saint Anne, built on the place where stood — according to tradition — the house of Joachim and Anne, the parents of Mary. Well, this church is on the site of a Byzantine church, consecrated on September 8 of a year unknown to us. It was on this date that the feast of the birth of Mary was placed, a solemnity dear to the Eastern Church, introduced in 701 A.D. in the West by Sergio I, a pope of Syrian origin.

And, thus, we have turned to a Byzantine-Slavic Marian hymn to propose a prayer to all Christians devoted to the Mother of the Lord … [In it] there is a suggestive definition of Mary as “earth of heaven.” She is, in fact, the field of creation in which God descends in a direct and explicit way … She is the fruitful womb offered to humanity so that the Incarnation of the Word is accomplished in our history.

Thus, the expression “earth of heaven” is Eastern Orthodox and Slavic, which — in the context of the Consecration of majority Russian Orthodox Russia and majority Ukrainian Orthodox Ukraine — looks like a nod to Slavic, Eastern Christian piety. And it also alludes to the miraculous conception of Our Lord in Our Lady’s womb. Metaphorically speaking, she was the field chosen by heaven, the earth in which Our Lord grew.

I then discovered that Fr. John Zuhlsdorf of the “What Does the Prayer Really Say” blog had also found out about this hymn. One of his readers knows a lot about Byzantine hymns, and she or he posted in the comments box numerous examples of the Blessed Virgin Mary being described as an “unsown field”, “earth unsown” and an “untilled field”. One particularly beautiful line supplied by Fr. Z’s knowledgeable reader is “From thee, the untilled field, hath grown the divine Ear of grain.”

I know that some people are worried about Pope Francis addressing Our Lady as “earth of heaven”, and there is an unpleasant theory making the rounds that he was trying to burn a pinch of incense to Pachamama, as it were.

However, the great St. Ignatius of Loyola taught that when we are confused by what someone is saying, we must make the most charitable interpretation. And I think the interpretation that is not only the most charitable, but the most correct, is that Pope Francis wanted to include in the consecration, which has taken place on the Feast of the Annunciation, a reference to Our Lady that alludes both to the conception of Our Lord in her womb and to Slavic Christianity. He or one of his advisors was familiar with the Maria, Terra del Cielo hymn, put it in the prayer, and there you go.

There are many titles for Our Lady. I wouldn’t say that this is my favorite, but at least it is authentic and may have touched many Russian and Ukrainian hearts today. I’m sorry the English translator couldn’t trust us with the “terra del Cielo” concept. If translating the prayers had been my job, I would have gone with “heavenly field” myself.