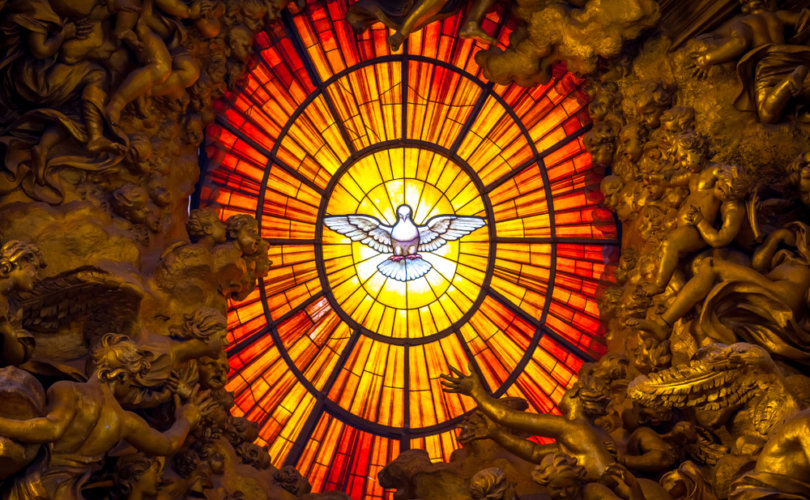 June 4, 2020 (LifeSiteNews) — The traditional Introit for Pentecost Tuesday practically explodes with joy, showing how dearly the Church welcomes the supreme gift, the Holy Spirit: “Receive the most sweet gift which shall be your glory, alleluia: giving thanks to God, alleluia, who hath called you to the heavenly kingdom, alleluia, alleluia, alleluia. V. Attend, O My people, to My law: incline thine ear to the words of My mouth.” Fittingly, when the priest or the schola repeats this antiphon, they will end up saying or singing the word “alleluia” ten times, pointing to the number of Commandments on the two tablets brought down from the holy mountain.

The psalm verse (“Attend, O My people, to My Law”) recalls that the original meaning of this feast was to recall with gratitude the giving of the Law, which, in the age of Christ, becomes the writing of the Law upon the fleshy tablets of our hearts — in other words, the essence of the Christian life and the whole point of it. In the “network of mysteries,” the descent of the Holy Spirit at Pentecost ranks easily on a level with the Nativity of the Savior we celebrate on December 25 and even with the commemoration of His Passion on Good Friday. For the birth and death of the Savior would have been of no benefit to us had He not poured out upon us the Spirit of adoption, leading us through His death to rebirth in Him.

No wonder the Church cries out in the Preface of Pentecost, used every day of the octave from Pentecost Sunday to Trinity Sunday:

It is truly meet and just, right and availing unto salvation, that we should at all times and in all places give thanks unto Thee, O holy Lord, Father almighty and everlasting God; through Christ our Lord. Who ascending above all the heavens, and sitting at Thy right hand, on this day sent forth the Holy Ghost, as He had promised, on the children of adoption. Wherefore does the whole world rejoice with exceeding great joy; the hosts above and also the angelic powers join in singing the hymn to Thy glory, saying without ceasing: Sanctus…

The whole world rejoices with exceeding great joy! Perhaps a Christian world would have done so, but in darker times such as our own, we might expect that at least the Church would rejoice with exceeding great joy for the same period of eight days that she gives to Christmas and Easter, and that she would follow that octave with many weeks of basking in the light of the mystery. Just as we have Christmastide and Eastertide, so, by analogy, there should be “Pentecosttide.” Surely enough, the traditional calendar did exactly this: after Trinity Sunday, each Sunday is marked as a “Sunday after Pentecost,” placing the entirety of time under the wings of the Dove.

But what is an “octave”? It is an eight-day period in which the Church, not content to remember some great mystery only on a single day, extends her joyful celebration for the period of a full week, with a culminating remembrance on the eighth day or octave day. Running through the week like this, the week of creation culminating in God’s rest and beyond it to the day of the resurrection, symbolizes the fullness of rejoicing — it is for all time — and the eternal joy of Heaven.

In the traditional Roman rite, there were eighteen distinct octaves during the Church year until the 1955 reform of Pius XII radically simplified them to three: Christmas, Easter, and Pentecost. These are indeed the most ancient, although most commentators who have studied the liturgical reforms of the twentieth century agree that this Pacellian pruning was radical. Among other things, it stripped the Church of the much loved and fitting octaves of Epiphany, Corpus Christi, the Ascension, and the Immaculate Conception.

The postconciliar liturgical reform went one step farther by abolishing the octave of Pentecost in the new calendar of 1969. Unlike Pius XII’s move, which might have been justified as a return to a simpler ancient calendar, this new step was entirely absurd, as it violated antiquity as well as the unanimous understanding of the prominence of Pentecost, which was treated as superior even to Christmas.

The earliest extant record of the Pentecost octave is from the late sixth century — the same century in which we find the first record of the observance of an octave day for Christmas, January 1, the feast of the Circumcision of Our Lord — but a prolonged celebration of Pentecost is probably much older, considering its universal presence in East and West. Something done by the Latins and the Greeks unanimously and from the earliest records is likely to belong to the apostolic period or shortly thereafter. (One might add, in a spirit of interreligious dialogue, that even observant Jews celebrate Pentecost, Shavuot or the “Feast of Weeks,” for two days instead of just one.)

Every year when I read the liturgical texts for the Octave of Pentecost in the Roman Rite, I am stunned that the liturgical revolutionaries abolished this octave. It’s incredible — a real act of iconoclasm and anti-pneumatology, a refusal of the charismatic grace of the liturgical season. This can be seen again and again and again in nearly every decision made by the reformers.

It seems to me that the Novus Ordo has earned for the Church exactly the reward we might expect from such offensive choices against tradition: an ever lessening gift of the Spirit, as dioceses go bankrupt, parishes merge and close, young people drift away, vocations (especially religious) remain a trickle, and courageous fidelity becomes increasingly confined to traditionalist enclaves.

In spite of all this, I will trust in God and obey the voice of His Church at her rightful prayer: “Receive the most sweet gift which shall be your glory, alleluia.” Come, Holy Ghost, fill the hearts of Thy faithful, and rekindle in the Church the fire of Thy love.