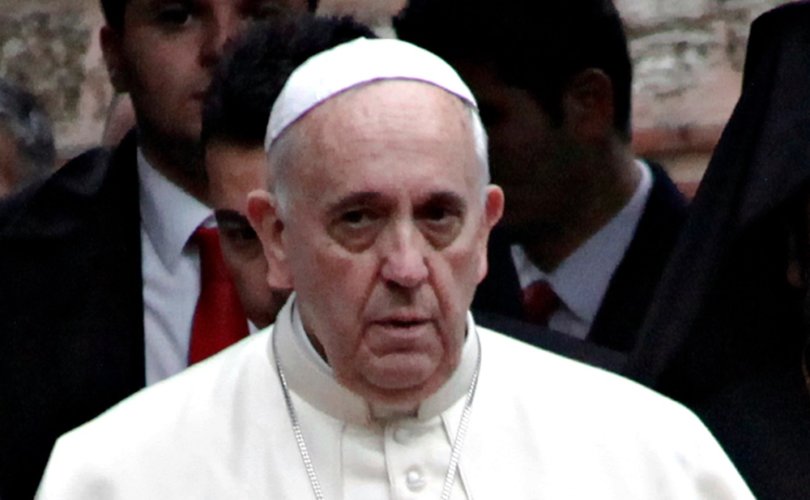 October 10, 2018 (LifeSiteNews) – We hear a lot of talk from the nucleus of postconciliarism, Pope Francis, and the cloud of Jesuit electrons that orbit him, on the theme of “discernment”: the need for a new discernment in today’s world; for discernment of the needs of youths, minorities, immigrants, women, or what have you; for discerning the surprising ways of the “God of surprises” in a Church still ossified with too much tradition (as if there were much left!).

One of the most perceptive Catholic commentators, James Kalb, published a brilliant article at Crisis on October 3 called “The Pope as Supreme Being,” in which he pointed out the pitfalls of a subjectivist and absolutist reliance on a process of so-called “discernment,” unmoored from rock-solid principles on which it must rest. The danger is all the more pressing when the one calling the shots for the worldwide Church sees himself as—and is lauded by his adulatory supporters as—free from constraints, whether it be the teaching of Scripture and Tradition, the witness of his predecessors and of all the Councils (not just the last one), or the doctrine of the great theologians.

The problem with making an airy appeal to St. Ignatius of Loyola and his emphasis on discernment of spirits is that St. Ignatius himself would have been the first to disown moral and doctrinal subjectivism and an absolutism of authority. His Spiritual Exercises are firmly grounded in immovable first principles, as any science must be if it is going to reach true conclusions, or any art if it is going to produce useful and beautiful works. The “room” needed for individual application is opened up by the power of the principles themselves, which, as long as they are adhered to, ensure that discerner will never stray beyond the boundaries of the Faith.

Let me offer a concrete image of what I am talking about. The art of navigation involves four elements: a set destination; a proposed path for reaching it, based on a good map; a knowledge of how to find the path “in the wild” by determining where one is in reference to fixed points; and an attentive knowledge of surroundings and changing circumstances. Navigation would be impossible if there were not fixed compass points and fixed features like the stars.

In the Catholic Faith, the destination is given to us already by Our Lord Jesus Christ: eternal life with Him. We reach this goal by a living faith in His Passion, into which we enter by the sacraments of His Church and ongoing conversion of life in prayer and good works. Our map is the Catholic Faith as taught by the Fathers, Doctors, Councils, and Popes, which hundreds of catechisms reliably sum up (it requires no doctorate to learn the Baltimore Catechism and live by it). Our four compass points—the north, south, east, and west of our spiritual globe—are Sacred Scripture, Sacred Tradition, the authentic Magisterium, and the lives of the saints. It is always with reference to these compass points that we can make our way confidently across whatever stormy seas lie between our current position and our destined port.

Notice how the work of “discernment” concerns only one of the four elements of navigation: attentive knowledge of and reaction to surroundings and circumstances. The goal, the way, the map, the objective requirements of navigation—all these are not matters of flexible assessment but matters of authoritative knowledge based on givens. Without those givens, the entire project is over and done. It would be easier for a ship to reach a harbor by setting out in a random direction on the Atlantic than for a Christian to reach heaven by means of a path not already plotted out, as it were, according the givens of our Faith.

And that brings us back to the problem of the modern (not traditional) Jesuit conception of discernment. For here we are dealing with a vision in which the ultimate goal of the Christian life is itself unclear: is it eternal life in heaven, or worldly goals like environmentalism, immigration, international peace? The way, too, is unclear: is faith in Christ and membership in His Church necessary for salvation, or is it all about, let’s say, good will, camaraderie, the search for a “transcendent Other”? The map has been, at best, ignored, at worst, run through the shredder since the Second Vatican Council, and few there are who make any reference to it—or worse, an attempt is made to rewrite the map.

Worst of all, those entrusted with navigating the vessel seem to think they can make their way without consistent and continual reference to the fixed points of the spiritual compass, as they dismiss major teachings of Scripture, jettison ecclesiastical and even apostolic traditions, turn a deaf ear to the great Councils of the Church (such as the Council of Trent, the most doctrinally substantive of all of them), and replace the great cloud of witnesses of unequivocally Catholic saints with the cloudy witness of more recent “saints” who are fast-tracked to canonization in order to legitimize this modern style of navigating, which, in reality, should be seen for what it is: the criminal negligence of drunken captains.

There is no discernment of spirits when the principles of discernment are up for grabs and always shifting. Indeed, one cannot help wondering which “spirits” such an anti-methodical method will end up following. The infernal spirits are those who have failed to attain the supernatural end for which they were created;  who are banished to the outer darkness without sun, moon, and stars (Christ, Mary, and the saints) to navigate by; and who seek to draw down into their own disorder men who will not submit to the humble yoke of Christ, who is “the same yesterday, today, and forever” (Heb 13:8).