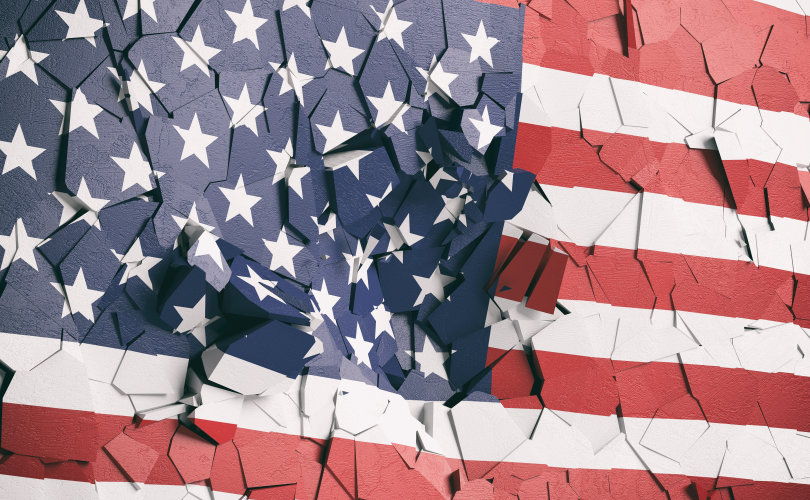 April 11, 2019 (LifeSiteNews) – While Christianity has been collapsing across Europe for the past half-century, with recent data indicating that a mere 18% of those who identify as Christian still attend church services regularly, the United States of America has traditionally been considered a far more Christian country. The electoral power wielded by the so-called Religious Right as well as the piety of many of America’s founders, settlers, and pioneers has infused America’s image with a religiosity that has defined the Shining City on a Hill for generations.

But a General Social Survey now indicates that for the first time in American history, atheists are the largest group in the nation at 23.1%, surpassing both evangelicals and Catholics as the largest portion of the population. Nonbelievers have increased a staggering 266% over the past thirty years, while mainline Protestant churches, which have largely embraced the Sexual Revolution and abandoned Christian orthodoxy entirely, have collapsed from 62.5% in 1982 to just 10.8% of the American population today.

We are already beginning to see the results of this collapse. In his recent book Them: Why We Hate Each Other—And How to Heal, Nebraska Senator Ben Sasse details why experts believe there are four primary drivers of human happiness, which can each be phrased as questions: Do you have a family you love and who love you? Do you have friends you trust and confide in? Do you have work that matters? Do you have a worldview that can make sense of suffering and death?

Religious communities not only provide communities that supply answers to these questions, but religious people are far more likely to behave in ways that lead to long-term happiness. One example is getting married, which religious people are more likely to do. They are also more likely to stay married, and countless studies have proven that those who get married and stay married are far happier and more satisfied with their lives than those who do not. Needless to say, the resulting family stability is also of inestimable value from both a social and a personal perspective.

It is also worth mentioning that Americans are far unhappier now than they were thirty years ago, despite the obvious advantages that have come with technological progress. Depression rates have spiked by 33% in just 6 years, 47% among Millennials, and teen suicide rates have risen by 70% in fifteen years. For the first time in decades, American life expectancy is going down rather than up, and this decline is largely due to what Tucker Carlson has been referring to as “diseases of despair”: Premature death brought on by opioid addiction, alcohol abuse, and drugs. Suicide rates are also on the rise across many age categories.

Finally, as I wrote some time ago here on LifeSiteNews, the declining influence of Christianity on American politics—something that is enthusiastically heralded by progressives—is no cause for celebration. The post-religious Right will be nastier and have a far greater tendency to nativism unhampered by the demands of Christian charity, and the dissolution of Christian moral constraints on both the Left and the Right will give rise to a politics of raw power with a greater emphasis on “us versus them.” As Ross Douthat put it in the New York Times, religious conservatives “actually tried minority outreach, it sent billions to fight AIDS in Africa, it pursued criminal justice reform in the states.” But because of “trends toward secularization and individualism,” that Religious Right is disappearing—but “without the pull of transcendence, the future of the right promises to be tribal, cruel, and very dark indeed.”

In short, a post-Christian America will be a meaner, more polarized, less charitable, and unhappier place. As many before me have already pointed out, many of America’s current struggles have their roots in this growing spiritual vacuum, and these worrisome trends indicate that these struggles will only increase in the years ahead. That vacuum will be filled, and we may not like what will come in to replace the Christianity spurned by the descendants of those who treasured it. For as G.K. Chesterton once purportedly said, “When Man ceases to worship God he does not worship nothing, but worships everything.”