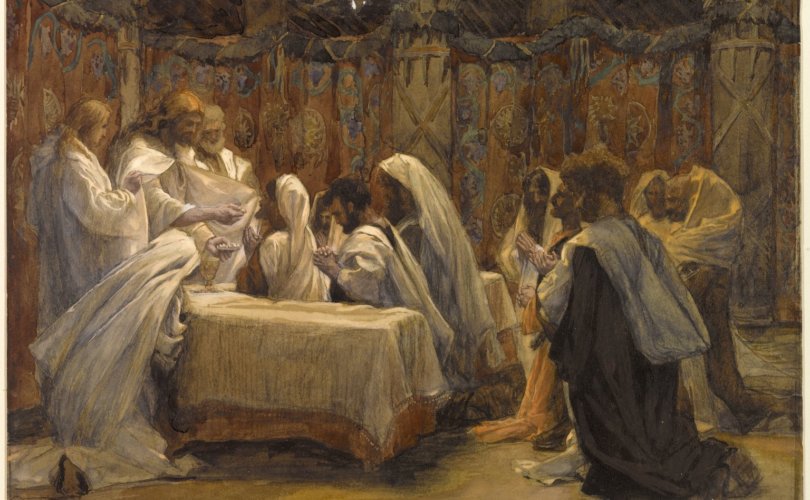 James Tissot, The Communion of the Apostles.

July 31, 2020 (LifeSiteNews) – The internet exposes the most breathtaking ignorance to full public display. It’s like a form of intellectual nudism. I suppose this is a good thing, as the errors and vices of the postconciliar Church can no longer hide, like creepy-crawly things in dark swamps, but are being exposed for what they are in broad daylight. This is not to say they will be instantly wiped out. It is only to say that it is easier to fight an enemy who makes himself apparent.

A Catholic Boomer priest, trained at St. John’s in Camarillo—there is no need to give his name, but he has quite a following on Facebook—posted this nugget:

For the first thousand years of the Church Communion was given in the hand only. John Calvin’s influence on the Church, along with the Gnostics preached that the human body was evil and that humans were basically evil and that Communion was only for the holy Clergy. This heresy was condemned, so the Jansenists, who followed a lot of Calvin’s heresies, said ‘You aren’t good enough to touch the Body of Christ with your hand, only with your tongue!’ as if the tongue is holier than the hand. When someone is Baptized or Confirmed their entire being is Baptized or Confirmed, not just their tongue. They are anointed and consecrated to Christ, their entire body, mind and spirit.

One barely knows where to begin taking apart such a tangled web of misinformation and fantasy.

1. We already have evidence of communion into the mouth from the first millennium. Msgr. Nicola Bux argues there are even indications of it at the Last Supper.

2. The early Christians did not practice communion on the hand in the way we do it. Our way is novel and desacralizing.

3. A custom that is observed for well over 1,000 years by all Eastern and Western Christians has nothing to do with Calvin or Gnosticism or Jansenism, but with humble and adoring reverence towards the Body of Christ, and due respect for the anointed hands of the priest who handles the Body of Christ as his proper office. The custom also predominated for practical reasons: it is safer and more efficient.

4. The tongue, in fact, is specially blest in the traditional rite of baptism, where a pinch of exorcised and blest salt is placed on it, with a prayer that looks ahead to the reception of Communion: “N., accipe sal sapientiae: propitiatio sit tibi in vitam æternam” (N., receive the salt of wisdom: may it be propitious to you unto eternal life), and then:

O God of our fathers, O God the Author of all truth, vouchsafe, we humbly beseech Thee, to look graciously down upon this Thy servant, N., and as he tastes this first nutriment of salt, suffer him no longer to hunger for want of heavenly food, to the end that he may be always fervent in spirit, rejoicing in hope, always serving Thy name. Lead him, O Lord, we beseech Thee, to the laver of the new regeneration, that, together with Thy faithful, he may deserve to attain the everlasting rewards of Thy promises.

No other part of the body is set aside in this manner for blest food. It is no wonder that the removal of this precious rite coincided with a permission, born of disobedience, for communion on the hand.

Let us consider some really important points that one would think should be obvious, but in our era, which combines a staggering lack of common sense with a confounding lack of historical, cultural, and liturgical awareness, I suppose nothing can be taken for obvious anymore.

1. Hands are seldom clean, which is why we’re supposed to be washing them frequently these days. More to the point, the hands are dirtier than the mouth, otherwise the CDC wouldn’t be constantly telling us not to touch our faces. Our mouth is inside of us, so it’s already got what we have (so to speak), but it doesn’t have what the outside world has, until something is put into it. In other words, all things being equal, the mouth is a “safe space” and the hands are not.

2. Moreover, the hand symbolizes work (“work of human hands”), while the mouth symbolizes speech, thought, judgment, and love. The Book of Revelation doesn’t say that Jesus has a sword in His hand; it says “And out of his mouth goeth a sharp sword” (19:5), showing His power and His reign of justice. The Song of Songs does not begin: “Let him touch me with the touches of his hands,” but “Let him kiss me with the kisses of his mouth.” This suggests that Scripture sees the mouth as closer to the heart of the person, more expressive of who and what he is.

3. Building off of these points is the symbolism of receiving in the mouth vs. taking with the hand. When someone puts food into our hands, it is being “handed over” and comes into our power. When, in contrast, someone feeds us directly into the mouth, we are basically passive: the feeder feeds, and the one fed is fed, like a small child by its parent. The latter arrangement suits better the divine feeding of us with bread from heaven.

4. While it is true that all of the faithful are baptized into Christ’s priesthood, the ordained priest participates in that priesthood in an essentially different and higher way: he can act in persona Christi capitis, in the person of Christ the Head of the Church. His ordination has set him apart essentially, not accidentally, for that office, and for all the activities that flow from it. Therefore it is fitting for him to feed himself and then to feed the other members of the Church, as Christ did His apostles at the Last Supper.

5. It was precisely centuries of opportunity to internalize these truths—together with lots of practical experience, good and bad—that prompted the Church universally, in all her Eastern and Western rites, to move exclusively to communion in the mouth, preceded or accompanied by a manifest sign of adoration.

6. Therefore, against this millennial tradition, the abrupt return of communion in the hand in the 1960s sent one and only one signal: the Eucharist and the priesthood aren’t such a big deal after all. Don’t worry about kneeling or bowing profoundly before it; don’t worry about being fed with the bread of angels. It’s just a symbol of our communal belonging and how great we already are by our baptism. And that brings us full circle to the Facebook post with which we began.

Stepping back, then, we see that one consistent set of symbols—developed over time by a Church that, guided by the Holy Spirit, believed profoundly in transubstantiation and the Real Presence—has been replaced by another set contrary to it, erosive of these beliefs. How hard is it to see that this “swap” has, in fact, taken place; that it cannot have been caused by the same Spirit, but rather, an opposing spirit; and that the Church must return, in sackcloth and ashes, to her eminently sensible and sacred tradition?

The painting shown above is by James Tissot (1836-1902): “Communion of the Apostles.” Tissot researched his paintings with exceptional care, and envisions the Lord feeding the Apostles as is customary in the Middle East, where a friend may place food in a friend's mouth, or a lover in that of his beloved, at least on special occasions (think of the custom of the bride and bridegroom feeding cake to one another at the wedding reception). Msgr. Nicola Bux, a distinguished specialist in liturgical and sacramental theology, makes the same argument (see here for references). The point is not that all communion was given this way in ancient times, but rather that we cannot exclude that communion was sometimes given directly into the mouth from the beginning, before it became the universal norm later on.