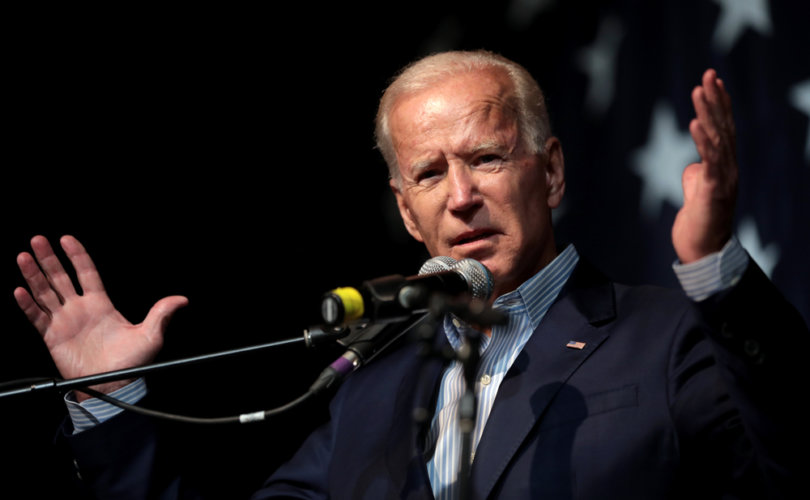 October 6, 2020 (LifeSiteNews) – A group of prominent evangelical leaders has just launched a statement on behalf of a “movement” they are referring to as “Pro-Life Evangelicals for Biden.” With signatories including Richard Mouw, president emeritus of Fuller Seminary; Jerusha Duford, Billy Graham’s granddaughter; and John Huffman, the board chair emeritus of Christianity Today, the statement calls on evangelicals who oppose the destruction of pre-born babies in the womb to vote for someone who has committed to an expansion of abortion rights unprecedented in American history.

The statement begins with a cursory repudiation of Biden’s position: “As pro-life evangelicals, we disagree with Vice President Biden and the Democratic platform on the issue of abortion.” However: “We believe a biblically shaped commitment to the sanctity of life compels us to a consistent ethic of life that affirms the sanctity of human life from beginning to end.”

For this reason, the signatories posit, abortion should not be a primary concern since “[m]any things that good political decisions could change destroy persons created in the image of God and violate the sanctity of human life. Poverty kills millions every year. So does lack of healthcare and smoking. Racism kills. Unless we quickly make major changes, devastating climate change will kill tens of millions. Poverty, lack of accessible health care services, smoking, racism and climate change are all pro-life issues.”

The signatories then insinuate that “Democratic proposals” would reduce the abortion rate (Dr. Michael New effectively debunked the deceit that abortion rates go down due to Democratic presidents last month), and explain that according to the National Association of Evangelicals’ official public policy document: “‘Faithful evangelical civic engagement and witness must champion a biblically balanced agenda.’ Therefore we oppose ‘one issue’ political thinking because it lack biblical balance…For these reasons, we believe that on balance, Joe Biden’s policies are more consistent with the biblically shaped ethic of life than those of Donald Trump. Therefore, even as we continue to urge different policies on abortion, we urge evangelicals to elect Joe Biden as president.”

The number of problems with this statement is staggering. To start, the signatories confuse intrinsic evils—like intentionally dismembering a developing human being in the womb—with contingent evils. The entire statement also reveals that regardless of what they are attempting to convey, the signatories simply do not take abortion seriously and do not actually present abortion for what it is. If abortion is the direct and intentional destruction of a vulnerable and helpless human being created in God’s image, what could possibly excuse voting for someone who supports that act?

For example, these evangelicals state that not to vote for Biden over his support for destroying babies in the womb (as well as his commitment to repeal the Hyde Amendment, which has saved 2.4 million lives thus far) is essentially legalistic and not “biblically balanced.” But to understand the extent to which these evangelicals are dismissing the value of the pre-born, ask yourself this: Would they apply the same standard to any other group? What if the Democratic Party was committed to alleviating poverty, fighting climate change, pacifism, and a laundry list of other policies—but supported the killing of a minority group as well?

Would the same justifications apply? If the Democratic Platform supported killing indigenous people, or African Americans, or immigrants the way they support killing pre-born children in the womb, would we be told that “on balance,” they were still more pro-life than the party who opposed killing those people? Would we be told that it was morally permissible to vote for the party that supported decapitating one subset of the population at will because that party was really opposed to smoking and pollution and were in favor of improving economic conditions to the point that many people wouldn’t feel the need to kill other people anymore? I suspect not. I suspect that this is a position that only applies to the killing of the pre-born—which says a lot about what the signatories of this statement think about the pre-born. I’ve held the corpses of dead babies in my hands, and I’ve looked them in the face—and I can’t pretend that voting for someone who advocated for the right to kill those children is a moral option. It simply is not.

It is also extremely revealing that the signatories of this statement actually posit a moral equivalence between abortion and smoking or climate change. This is just transparent nonsense, and shows a genuine lack of understanding about what abortion really is. I would encourage those claiming this moral equivalence to go online and watch a video of an abortion procedure. It will disabuse you of such notions very quickly. It should also banish the idea that we can vote for someone who believes it is a social good that older human beings have the right to kill younger human beings in a grotesque and barbaric fashion because that person has a few other policies that we like.

It is sadly ironic that this statement from “pro-life evangelicals” comes out just as Joe Biden has announced that if Amy Coney Barrett is confirmed to the Supreme Court and Roe v. Wade is overturned, he’ll enshrine Roe in statute and make it “the law of the land.” But hey—Biden doesn’t like poverty. Let that distract your attention from the corpses of 65 million dead babies that litter this land as a result of Roe—and vote for the man who promises it will never end on his watch.