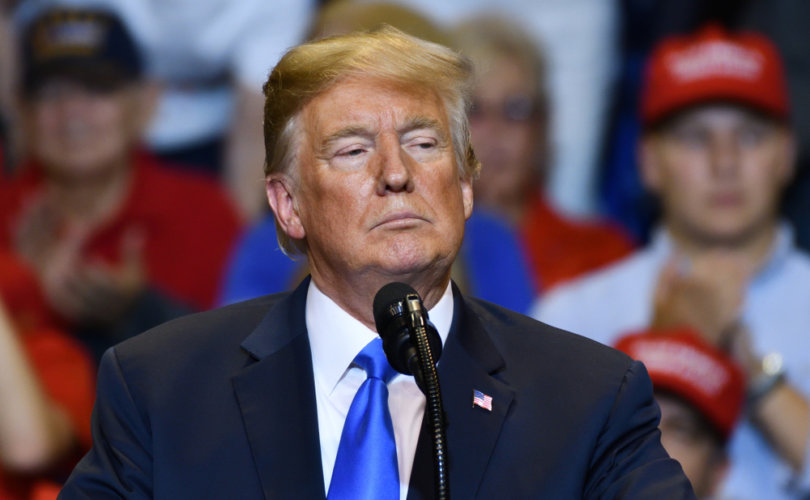 August 27, 2020 (LifeSiteNews) – These days, National Review writer and self-proclaimed evangelical David French is most well known for his deep-seated contempt for President Donald Trump and pro-Trump Christians, which has taken him to some places that would have been unthinkable a decade ago. Case in point: his latest Sunday newsletter at The Dispatch, titled “Do Pro-Lifers Who Reject Trump Have ‘Blood on their Hands’?” in which he denies that his NeverTrump stance carries the “blood of unborn children,” on the grounds that “presidents don't have much influence over abortion at all.”

French sets the stage for his argument by noting that abortion rates continue to trend downward over the long term, regardless of who is in office. This is heartening, certainly, but hardly mitigates the moral urgency of the fact that more than 3,000 babies are still legally murdered every day in the U.S., or 826,320 in 2017. French writes:

It’s worth noting that the Trump administration has demanded Planned Parenthood return the bailout money (of course, it remains to be seen if it will back up words with action), and that Republicans have been rubber-stamping budgets that included Planned Parenthood since long, long before Trump came along, and it never made them unsupportable to French before.

More importantly, Planned Parenthood’s record funding would obviously be even higher had Trump not been in office to enact the Title X rule, or restore and expand the Mexico City Policy (which French neglects to mention). That loss for Planned Parenthood potentially amounts to thousands of real, innocent, human children who live because of actions Trump was there to take. French continues:

Unlike George W. Bush—who signed into law a born-alive infant protection bill and a partial-birth abortion ban—Trump has not signed a single significant piece of pro-life legislation.

The born-alive law sailed through Congress unopposed, and the partial-birth abortion ban had a Republican Congress and enough Democrat votes to overcome the filibuster. As French knows full well, since then the Democrat Party has purged its pro-life and even anti-infanticide factions, and even when Republicans had the House, there weren’t enough Senate votes to overcome the legislative filibuster (which Trump opposes, and many NeverTrumpers support) that kept blocking bills like the late-term abortion ban and stronger born-alive protections. Continues French:

How many of the current Supreme Court justices have recently and unequivocally stated that Roe v. Wade and Planned Parenthood v. Casey (the two cases securing a constitutional right to an abortion) are bad law? Exactly one out of nine. It’s George H.W. Bush appointee Clarence Thomas […]

For almost three decades, the Supreme Court lesson has been clear—put not your trust in judges to rescue America from the moral stain of abortion.

It’s obviously true that the judiciary cannot be the only direction from which we attack Roe. But it’s equally obvious that French’s bizarre passivity about bad GOP judges (a recurring trait among pundits who came out of a fundamentally-broken “conservative” legal establishment) is wildly insufficient.

The fact that we can’t trust decades’ worth of Republican justices to behave as originalists, despite the last four Republican presidents promising exactly that, is not some law of nature we have to accept; it’s the result of years of presidents, senators, advisers, lobbyists, pundits, and activists choosing to tolerate bad selection and bad vetting.

Yes, Trump is just as disappointing as Bush on this front. But the lesson here is not that the presidency is unimportant because pro-lifers don’t get enough out of it, but that it’s so important we need to be smarter and bolder about demanding more, from judges to spending bills to long-neglected prosecutions… a task for which French and his fellow travelers have made themselves useless.

By casting Trump as the enemy, NeverTrumpers destroy any potential they might have had to influence those areas where Trump hasn’t delivered. When you make clear that nothing a politician does will ever be enough to win your support, what reason is there for him, his advisers, or his supporters to listen to a word you say?

Next, French argues that “losing or winning state elections has proven to be more directly material to the law of abortion than 40 years of federal electoral contests,” citing the fact that states enacted 288 abortion restrictions between 2011 and 2015. To the obvious counterpoint that these laws are utterly at the mercy of federal courts, he claims that “overruling Roe won’t touch the vast majority of American abortions.” He writes:

This interactive chart is a bit outdated (the data is from 2014), but still useful. It shows abortion rates varying from a low of 5 per 1,000 women (Utah) to a high of 29 in New York state. That’s immense variation.

The consequence is that overruling Roe would have a disproportionate effect in states with already-low abortion rates. A recent study calculated a potential 32.8 percent decrease in the abortion rate “for the regions at high risk of banning abortions.” But for the nation as a whole, the abortion rate would likely shrink by only 12.8 percent.

Note how French changes his metric from number of laws to abortion rates between these two bullet points. If abortion rates were used for both, it would undoubtedly illustrate the limits of what the states can do with the courts tying their hands.

And using pro-life laws for both would highlight the fact that, if Roe fell, abortion would become mostly or entirely illegal in the eighteen states with their pre-Roe bans still on the books and/or trigger laws designed to take effect once Roe is out of the way, and in the four other states that enacted heartbeat laws or general abortion bans between 2018 and 2020.

Besides, the study French cites says those percentages “would amount to 118,554 […] women prevented from obtaining abortions in a single year due to increased travel distances.”

French tries to sidestep that moral quagmire by arguing that, because abortions continue to fall regardless of who’s in power, therefore the “things that matter most” are local community activism like supporting pregnancy centers, and the “presidency and national politics” actually “matter the least.”

Obviously, the heroic pro-life grassroots are essential. What’s not heroic is using them as an excuse not to do all we can at the federal level. It’s simply immoral to advocate that we not resist a pro-death ticket’s takeover of the executive branch just because part of the victim pool will be saved either way… especially when that ticket’s judges will also decide the fate of laws that directly impact pro-lifers’ ability to serve their communities.

Reading French’s column, one senses a theme shared by a lot of “pro-life” NeverTrumpers’ rationalizations: a distinct lack of moral urgency for the task of ending abortion. That’s nothing new; similar arguments have been used for years by moderate Republicans trying to justify complacency. And they’re just as inadequate now as they’ve always been when it comes to the legalized murder of children.

But if none of this is enough to awaken David French to the horror of his 2020 stance, then how about the words of his 2012 self?

It is now beyond clear that if a Christian wants to support Barack Obama and Joe Biden, they have to be content with supporting a ticket that not only supports abortion “rights”, it supports taxpayer funding of abortions, and it does so as a “core” value. Simply put, a Christian who takes such a position or lends even the slightest support to such a position — a position that, to be clear, seeks to not just sanction but subsidize the intentional taking of hundreds of thousands of human lives — is committing a grievous sin.

In May I wrote a much-discussed post that ended with a simple question for our newest generation of “post-partisan” Christians: “As the price for your new path, are you willing to forego any effective voice at all for unborn children?”  The next president is likely to select no less than two Supreme Court justices.  Your vote can help determine whether we have a fighting chance at overturning a constitutional atrocity or whether you secure the right to kill yet another generation of unborn Americans.