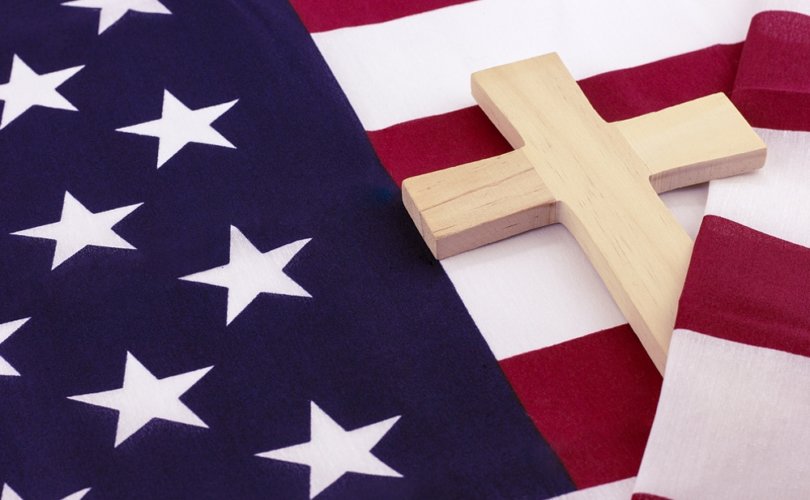 Stand fast therefore in the liberty wherewith Christ has made you free (Galatians 5:1)

March 20, 2018 (LifeSiteNews) – When it comes to America’s politics, I’m always wary when people start to speak of fundamental right and rights in language that does not correspond to any words contained in the Organic Laws of the United States.

So, though I understand and agree with their concerns about the legalistic persecution of Christ’s followers in the United States, I am wary of the extent to which people have slipped into the habit of expressing that concern in terms of “religious liberty.”

This habit makes it seem as if what is involved is only of importance to those who profess to be “religious,” in some sectarian, denominational sense.

But even a cursory reading of the Organic Law of the United States makes it clear that ideas usually classified as “religious” are fundamental to the institution of government in the United States, and to our people’s claim to sovereign self-government.

Many people in the United States have been taken in by the lie that the Declaration of Independence forms no part of the positive law that governs our country.  In a sense, this seems correct, since its adoption antedates the establishment of any institutions of national government, approved by some formal proceedings to ascertain the will of the whole people of the United States.  But the Declaration’s signatories style themselves “the Representatives of the united States of America,” referring to the States in their several and distinct capacities.  They declare the States “united,”  but the Declaration itself is the first formal, politically authoritative pronouncement of that unity.

The body that approved the Declaration represented all thirteen of the British Colonies that would form the United States of America. Its members said they spoke: “in the Name and by the Authority of the good People of these colonies.”  Their Declaration is, thus “organic” in the sense that, like the cry of a newborn baby, it represents the first public expression of the living body politic of the people of the united States.  It also articulates the ideas that define and inform the identity of that body, making it recognizable to the States and individuals comprising it, and to the rest of the world.

The Declaration is, first and foremost, the report of an action, like the sound given off by the discharge of a firearm.  Also, like the report of a firearm, the words of the Declaration reflect the character of the action, and of those responsible for it.  They justify the conclusion that the foremost characteristic of the American people appears to be their reliance on the Creator, God, the author of “the laws of nature and of Nature’s God.”

Their Declaration says that the Creator’s sovereign will is what entitles people who abide in it to assume the power of government over themselves.  His sovereign will substantiates their existence, and that of all other human things.  With that substantive endowment of their nature, His sovereign will entails upon all human beings equally, an obligation to do right.  This obligation is that much more challenging because of the special form of freedom human nature encompasses.

The combination of obligation and freedom (which latter encompasses wrongdoing as well as right) is what gives rise to the necessity for government.  For since doing right is an obligation entailed upon humanity by the sovereign will of the Creator God, we must protect the exercise of right from disruption and invasion by those who refuse to fulfill their obligation.  This is why Madison observes (Federalist #51) that if men were angels, government would not be necessary.  When people who are individually inclined to abide by God’s rule come together with the aim of ending violations of the rights they are inclined to exercise as individuals, their consent (i.e., commonly felt disposition) gives rise to the just power of government necessary.  Their common will in this respect derives from their common and mutual acknowledgment of God’s authority; and their common and mutual respect for God’s rule.

Preserving the understanding and will to sustain this reverence for God is thus essential to exercising all their rights, including self-government.

Many people these days speak as if religious liberty is the hobby horse of a particular group of Americans.  But all our rights, including liberty in all its rightful forms, depend on the Declaration’s appeal to God’s authority, and the obligation it entails. Therefore, understanding the logic that justifies and substantiates that appeal is not just in the interest of people who are “religious” in some narrow, sectarian or denominational sense.  It is essential to our identity as a free (i.e., responsibly self-governing) people.

Followers of Christ, whatever their denomination, ought to consider their uniquely important responsibility for maintaining this aspect of the common good of the American people.  At the time of the America revolution, many of those most active in developing, defending and promulgating the above understanding of constitutional self-government were followers of Christ.  They knew that America’s opportunity to erect and maintain such government owed all its good prospects to the insights and character of people transformed in Christ.

Followers of Christ need to rediscover this vocation.  We need to consider that Christ, the Word “through whom all things were made,” is the Creator relied on in the Declaration. His authority is the key to understanding the duty of human self-government it asserts.

So, preserving respect for God and Christ is not a narrow “special interest,”  for it serves the general interest of all Americans.  For rightful liberty will not endure unless we dare, with conviction, to preach justice according to the written and Incarnate Word of God.  We must do so not only as individuals speaking privately to one another but as citizens speaking to our nation of its heritage.  But over the past two and two score centuries, people from everywhere on earth have come or else been brought here.  Many of them responded to the promise of our creed—that we would honor our obligation to God to do right—not just in our words, but in our actions, our politics, and our laws. The good people of the United States have more than once joined forces to pursue this promise, even when doing so meant risking all their material goods.

Is that promise fading now? If so, it is not only because hostile forces are determined to constrain our conscientious testimony. It is because we no longer, at every opportunity, fearlessly proclaim the truth that once accurately appeared to our founders as self-evident: that freedom bound by God’s goodwill is what America’s Declaration creed upholds as liberty for all. We must all be bound and determined as citizens to uphold what they upheld.