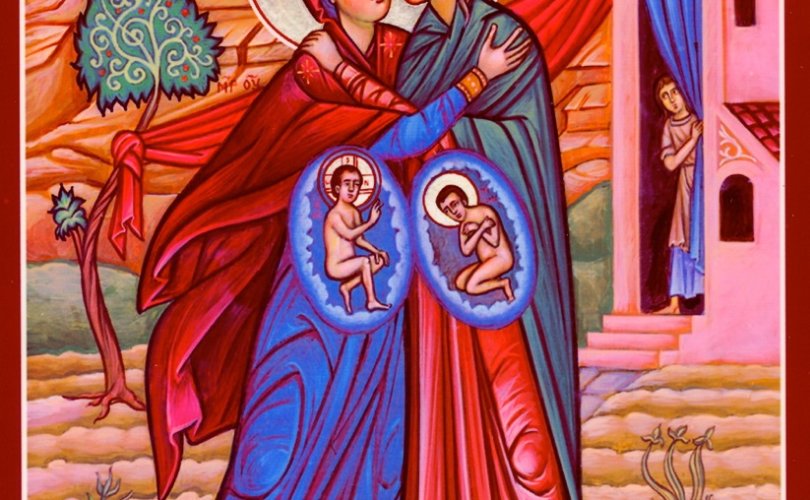 (LifeSiteNews) – There are no coincidences in God’s Providence, and miracles come when least expected. In fact, I would say that miracles are by definition unexpected as they are like heavenly moments of God’s power sneaking in behind the lines of the natural to bring blissful supernatural interruptions.

Last year when it was announced that Roe v. Wade would be considered for the chopping block, I, like many, did not think much would come of it. Sure, the court was pro-life on paper, but the legal ins and outs of constitutional law are complicated.

In addition, who knew how Trump’s judges would act under pressure?

Well, then something miraculous happened, which is to say something completely unexpected happened: Pope Francis decided to consecrate Russia and Ukraine to the Immaculate Heart of Mary.

Now, I should caution that by arguing that what has happened today may in fact be a result of the Pope’s actions in March, I am not making a claim that we are in the Triumph of the Immaculate Heart, or that an age of peace has descended. Instead, I am just looking at the goings on through the lens of the Catholic religion, prophecy, and the liturgical calendar.

READ: Be on guard: the pro-abortion violence is scheduled to begin at 8pm tonight

For a moment, let’s consider what it might look like if heaven were to give us a sign that Pope Francis’ consecration was pleasing to God.

We could imagine a variety of scenarios, I am sure.

In my opinion, the overturning of the most significant abortion law in the most powerful nation on earth might be a contender for a wink from Heaven. Of course, it could be that it has nothing to do with the Pope’s actions in March, but there is more to the story.

Today is the Feast of the Sacred Heart, and it is also the traditional feast day of the birth of Saint John the Baptist. Yes, the feast was moved to tomorrow in the old calendar due to the supremacy of Christ’s feast. However, it is still the vigil of Saint John’s feast, and it is still celebrated as his birthday in Quebec and historically Catholic countries. Point being, today in a cultural sense is as much the Feast of Saint John the Baptist as it ever was, and it is also the actual Feast of the Sacred Heart of Jesus.

There is a world of significance to unpack in this providential meeting of the Sacred Heart and John the Baptist.

Let us consider the first meeting between Christ and John.

Immediately after the Annunciation (March 25, the day Pope Francis did the consecration) Mary and her Immaculate Heart visited her cousin Elizabeth, and it is said that upon her arrival, “the infant leaped in her womb.” Thus, we understand that John – who was around the age of six months gestation – leaped at the arrival of his Saviour, who was in the very early stages of life in utero.

— Article continues below Petition —
PETITION: Trudeau must apologize for "mass grave" smear that led to church-burnings
Show Petition Text
4511 have signed the petition.
Let's get to 5000!
Thank you for signing this petition!
Add your signature:
Show Petition Text

The pro-life significance in this encounter is easy to see, given that a Sacred Child and a saint-to-be were able to connect in a way that goes beyond mere biology. There is a spiritual element to the encounter, which tells us that God has endowed the unborn with a unique human soul, thus the full dignity of a fully-grown human person.

Very important to recall, as well, is that Our Lady stayed with Elizabeth for exactly three months, until the birth of John, and then she left.

Now, if Heaven were to make its presence known in the world, especially in a moment like this, I think we can responsibly make a few connections.  Three months after Pope Francis consecrated Russia to the Immaculate Heart of Mary, there comes a providential day when the Sacred Heart and the Heart of John collide, and on that same day a judicial miracle takes place wherein the beating hearts of innocent children are given their rights.

In this month that we are told is dedicated to pride, the power of satan is overcome by Precious Blood beating in the Sacred Heart that was made incarnate by Our Lord condescending Himself into the flesh in an infinitely important act of humility.

In addition, it is often forgotten that John the Baptist was beheaded because of his defense of marriage. It was only when he called out the king’s perverse and adulterous activities that he was put to death. How fitting that Heaven’s Defender of Marriage would intervene in the month where marriage is denigrated the most.

The modern world has descended into the most ghastly grip of neo-pagan ritualism, and the destruction of the family and the children that result therefrom act as sacramentals in this perverse society.

However, the devil may have his hour, but Christ will have his day. And, He will not have his day without his Mother, just like He would not give us his Sacred Heart without first incarnating in the womb nourished by the blood that pumped from the Immaculate Heart.

The battle for life is not over, but the forces that run our governments are reeling in anguish as their topsy-turvy world view has taken a mortal blow.

I do not know if what Pope Francis did will bring the Triumph of the Immaculate Heart, but I do know that the Sacred Heart has triumphed over Roe, and I believe we have the most unlikely of Popes to thank.