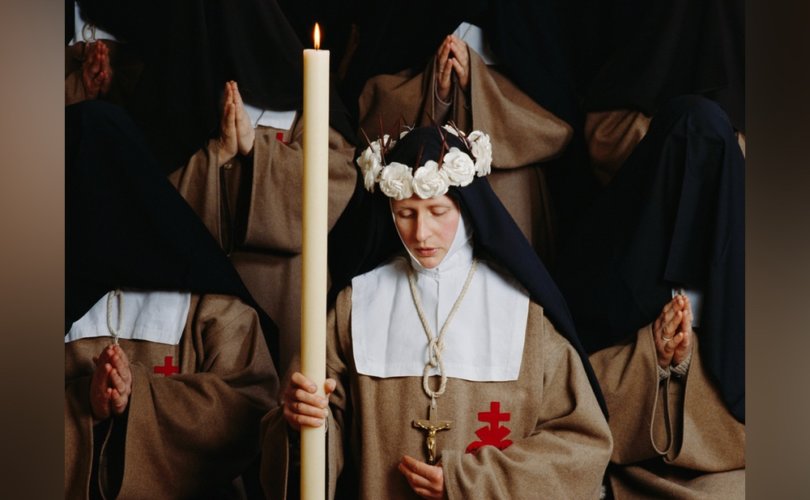 Victim Nuns of the Sacred Heart of Jesus.

April 10, 2018 (LifeSiteNews) – As celibacy and virginity come increasingly under fire not only in the secular world but even within the Church and her very hierarchy, we must renew our understanding of immutable Catholic doctrine and our commitment to “contend earnestly for the faith once delivered to the saints” (Jude 1:3).

In the ancient Church, Jovinian was a heretic who taught the equality of sacramental marriage and celibacy for the kingdom of God. His views were roundly refuted by St. Jerome and St. Augustine, and the Church in her Magisterium has consistently taught as they do: one who marries in Christ and brings children into the world does well, but one who altogether relinquishes marriage and family for the sake of following Christ more closely does even better.

Nevertheless, Jovinianism rears its ugly head throughout Christian history. The Protestant Reformers challenged the traditional doctrine, in spite of the fact that it is based on the very words of Christ and of St. Paul. In more recent times, we certainly see among Catholics a pragmatic sort of Jovinianism, which I have discovered in nearly all the students I have ever taught. Perhaps because they have met in their lives so few authentic religious brothers and sisters, they tend to think it wrong to elevate the religious state above the married state as a means for attaining perfection in charity and contemplation. They are surprised to learn that they are in conflict with the unanimous teaching of the Church Fathers, Doctors, Popes, and Councils.

One student put the case this way on a final exam: “If I am a married person and I do everything, including change diapers and go to work and embrace my wife and build up a house and garden, all for the love of God, how am I not making of myself and my life a ‘holocaust’, a total offering, that is just as pleasing as the offering of a religious who gives up family, property, self-determination? As a matter of fact, the religious still has clothes, a bed, a house to live in, probably a lot of books, financial worries in his community, practicalities to take care of, his brethren as a family, and for the most part he does what he wants from day to day, even if the bigger decisions belong (in part) to a superior. So is his life really all that different from mine?”

Sounds plausible, doesn’t it? With a vague appeal to the “universal call to holiness” and the “primacy of charity,” one can quickly deduce that all Christian states in life are equal. Interestingly, St. Thomas Aquinas also teaches that holiness is for everyone and that charity holds pride of place in becoming holy, but he does not, all the same, reach that egalitarian conclusion.

The student claimed that “marriage, too, is a total holocaust.” I ask: in what sense? Is the married man or woman actually giving up spouse, children, house, fields, his or her own will? In a way yes—but in a decisive way, no. When Jesus told his disciples that they who left everything to follow him would receive a hundredfold, he was not speaking metaphorically, but quite literally. Nor was he saying that those who renounced these things up front were permitted to reintroduce them later, through the back door. The hundredfold blessing rests only on the ones who remain poor, chaste, and obedient, and to the extent that they are truly such.

In order to understand the Our Lord’s teaching better, let us consider how the evangelical counsels of poverty, chastity (in the sense of perpetual continence), and obedience are means for accomplishing the goal of perfection in charity, that is, holiness.

The counsels take away those material and temporal goods that tend to distract or weaken our focus on God or that allow us to rely on them rather than on Him. Unlike the commandments, the counsels do not separate us from bad things that are incompatible with love of God. Rather, they separate us from things that are in themselves good, even very good, but not the greatest good, and thus can hinder a direct focus on the greatest goods, and on the Giver of all good things. The reason why separating ourselves from things that are good is helpful for focusing on the highest good and source of all goods, on God Himself, is that we are finite beings with finite capacities for attention and love. Therefore, by removing our attention and love from worldly and temporal goods, the counsels help us to fix them more fully on spiritual and eternal goods, on the divine. St. Thomas beautifully makes this point:

It is manifest that the human heart is borne more intensely towards one thing, to the extent that it is withdrawn from many things. Thus man’s mind is borne more perfectly to loving God to the extent that it is removed from love for temporal things… Therefore all the evangelical counsels, by which we are invited to perfection, have as their aim the turning away of man’s mind from love for temporal things, so that his mind may tend more freely to God, by contemplating, loving, and fulfilling his will. (On the Perfection of the Spiritual Life, ch. 6)

In the present climate, it is important to emphasize that the counsels are not proposed as good because the things we give up by following the counsels are bad, but because there is a better way to grow in love than the use of these things. Giving up marriage enables one to grow more in the love of God and neighbor solely because the direct dedication of our heart and mind to God is a better means for growing in love than marriage is, whether considered in itself or as a sacrament (see Pope Pius XII, Encyclical Letter Sacra Virginitas, nn. 37–39). Pope John Paul II taught this quite clearly:

The reference to the nuptial union of Christ and the Church gives marriage itself its highest dignity: in particular, the sacrament of matrimony introduces the spouses into the mystery of Christ's union with the Church. However, the profession of virginity or celibacy enables consecrated persons to share more directly in the mystery of this marriage. While conjugal love goes to Christ the Bridegroom through a human union, virginal love goes directly to the person of Christ through an immediate union with him, without intermediaries: a truly complete and decisive spiritual espousal. Thus in the person of those who profess and live consecrated chastity, the Church expresses her union as Bride with Christ the Bridegroom to the greatest extent. (Catechesis on Consecrated Life, November 23, 1994)

Implied in these words is, however, a salutary warning. One who gives up marriage—a monk or nun, a priest, a bishop—will not be any better off for doing so if he does not use the freedom of his heart to devote himself more fully to God and to the service of the Church. In fact, he will be worse off, since he will lack the great good of marriage as well as the greater good of virginity or celibacy “for the kingdom,” the orientation that alone makes it so great a good.

Moreover, assuming good intentions to begin with, the intensity and steadfastness of the resolve to pursue the goal of holiness using whichever means one chooses is of greater importance than the means as such. To be more concrete: it is better to seek for holiness in marriage wholeheartedly, than to seek holiness in religious life halfheartedly.

Our Lord has provided us with two ways, noble and nobler, good and better, of entering into the mystery of His indissoluble nuptial union with the Church: through a sacramental image of it in marriage, and through a mystical participation in the very union itself in consecrated life.