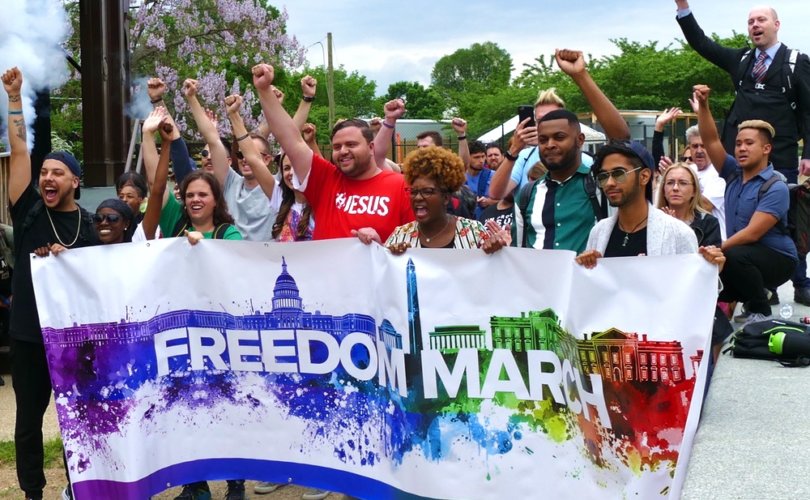 May 8, 2018 (LifeSiteNews) – How would you answer this question? Which group is the smallest, most rejected minority in our country?

African Americans have certainly suffered terribly through our history. But they are not the smallest minority today, making up roughly 12 percent of the population. And, despite ongoing issues they face, African Americans are certainly not the most rejected.

Perhaps it is Native Americans? They make up less than 1 percent of our population, so they are certainly very small. And their suffering over the centuries has been intense, with their communities facing immense difficulties to this hour.

But they are neglected more than rejected. To most of our country, Native Americans are, sadly, out of sight and out of mind. And there is another, suffering minority that is smaller still.

What about the LGBT movement? They too are quite small (perhaps equaling 3 percent of our population; estimates vary). And to this day, many who identify as LGBT suffer hatred and unjust discrimination.

But the truth be told, LGBTs are more celebrated than denigrated, more protected than rejected, more powerful than powerless.

Ironically, the group that can lay claim to being the smallest and most rejected minority in America today once was part of the LGBT movement. They once identified as gay or lesbian or bisexual or transgender, but they no longer do. Today, they are “ex-gay” or “ex-trans.”

Their numbers are very small, since they came out of a small community to start with. And it is only a small percentage of that small group who make a break with the rest of the LGBT movement.

Most of them make that break because of their religious faith, often newly found. Others make the break simply because they no longer want to identify as gay or bi- or trans. But for making that break, they pay a steep price.

They are mocked and maligned and bullied by the community they once called home.

They are told they do not exist. They are assured they will fail. Their motives are questioned. They are called liars and mercenaries.  They are even mocked for being so small in number (even if they number in the thousands or tens of thousands, that represents the tiniest slice of the population).

All this simply because they want to lead a new life, because they do not embrace their same-sex attractions (or, their gender confusion.)

Really now, what can possibly be wrong with a man wanting to be married to a woman, having natural children of his own? Why on earth should he be penalized for that?

What can possibly be wrong with a woman wanting to be at home in her own body? Why on earth should she be criticized for that?

Why are ex-gays and ex-trans individuals put under such intense pressure? If they have one slip-up, they’re called phonies. If they still struggle with attractions or gender confusion, they are told they haven’t changed. But why?

There are plenty of former alcoholics who fell off the wagon for a season, only to get back on track. Are they ridiculed or do they receive empathy and compassion? Many of them identify as recovering alcoholics. Why can’t someone identify as a recovering homosexual?

But when it comes to someone being ex-gay, things are very different. If you still struggle with temptation, even if you don’t yield to it, you’re told you’re living in denial. If you mess up once, you’re discouraged from trying again. Why the double standard?

I personally know ex-gays who have experienced a complete and total change. They have embraced heterosexuality and have been happily married for many years.

I know others who remain same-sex attracted but who say no to acting on those attractions. They are happy to be celibate, finding joy and purpose and satisfaction in life without being in a sexual or romantic relationship.

And I know others who tried to come out of homosexual practice, only to fall back and embrace the homosexual lifestyle. But their very real failures and struggles do not negate the success enjoyed by the others.

Why, then, can’t the LGBT movement accept it when someone says, “I was once out and proud as a gay person; now I’m out and proud as an ex-gay person”? Why, instead, do LGBTs commonly mock and attack and ridicule those who identify as ex-gay (or, ex-trans)?

The reason is simple: If it is possible for someone to change from gay to straight, either through the gospel or through counseling (or both), then the whole “innate and immutable” argument goes out the window. (The same can be said for someone who is ex-trans.)

In other words, one of the foundations of LGBT activism is that, “We’re born this way and we can’t change. Gay is the new black. (Or, trans is the new black.) This is who we are. Our sexual identity is as innate and immutable as our skin color.”

That’s why those who say, “I used to be gay, but I’m free today” must be maligned. Their existence must be denied. Their ultimate failure must be assured.

If change is possible – again, through divine intervention or through counseling or both – then the whole push for “LGBT rights” can be questioned.

I’m aware, of course, that for many who identify as LGBT, this is an intensely personal issue. They tried to change and could not, leading to depression and even attempts at suicide. They had bad experiences with counseling. They were rejected by their churches or families. And they finally found relief when they embraced their so-called gay (or trans) identity.

The moment they hear of someone who claims to be “ex-gay” or “ex-trans,” those old wounds are opened and they feel personally attacked.

To such people I would say this: Just as you must live your own life before God, allow others to do the same. Just as you have the right to self-determination, allow that to others as well. And just as you despise bullying, don’t bully others.

This past weekend, a small group of ex-LGBTs held a rally in Washington, DC, called the “Freedom March.” Although I have met many such people around the country, I expected that the turnout would be tiny. And it was.

That’s because the great majority of those who came out of homosexual practice and transgender identification simply want to live their lives. They are not known or celebrated. They are on no one’s payroll. They are changed, and they are the better for it.

But I do know that many of them feel alone and misunderstood. That’s why one ex-gay counselor, Chris Doyle, founded Voice for the Voiceless. Its mission is “to defend the rights of former homosexuals, individuals with unwanted same-sex attraction, and their families.”

It is a mission all of us should support, especially those of us in the faith community. If anyone should be encouraged and embraced, it is these precious men and women, some of whom are still in the healing process.

And this is in keeping with the New Testament writings, which say plainly that, just as some of us once engaged in sexual immorality or adultery or theft or lying or greed or idolatry or homosexual practice, we do so no longer. If the Son of God sets us free, we are free indeed. (See John 8:31-36; 1 Corinthians 6:9-11. For our 6-minute, animated video, go here.)

So, I say to the ex-gay, ex-trans community, you are not alone. We are standing together with you. More importantly, the Lord is standing with you. Be strong in Him.