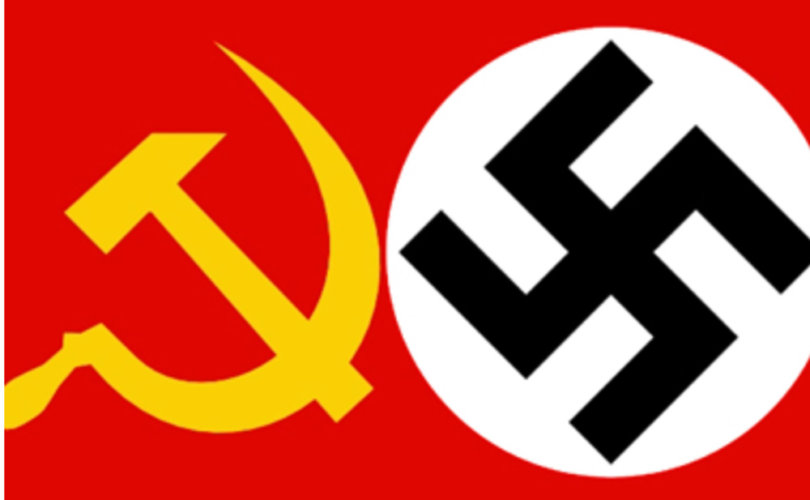 Communists and Nazis have always been very similar violent socialists.

Note: This important article from American Thinker by Tom Trinko explains some of the ideological background of the international culture war. It is astonishing how little most Westerners today know about the evils of Communism. They are therefore easily manipulated by leftists, such as the hugely-funded, violent Antifa terrorists, whose primary aim is to bring down the Trump presidency and destroy the traditional influence of the United States.

The ultimate goal of the Democrat/leftist movements today is to force, drag and otherwise absorb the United States into a socialist, godless New World Order that will also involve monumental world de-population measures.

With all of this in mind, the so-called “Nazi”, “white surpremisicst groups” are a relatively tiny, poorly funded and far less dangerous to the United States than the leftist groups funded with many millions of dollars of donations and constantly given supportive media coverage by most globalist controlled mainstream media.

September 13, 2017 (American Thinker) – Since the founding of the Soviet Union, modern leftists have been trying to portray Communism as a great thing.  We know they’ve succeeded because calling anyone a Nazi is viewed as a heinous charge while calling someone a Communist is no big deal and can even be considered a compliment by some leftists.

Walter Duranty, a NYT reporter, got a Pulitzer prize for lying about the mass starvation in the Ukraine in the 1930s. Now that we know the truth, neither the Pulitzer committee nor the NYT want to retract the award.

Leftists are so eager to support Communism that they say that a reporter who covered up Communism’s mass murder of millions of people deserves an award for journalism.

On the other hand, leftists and the MSM are so eager to condemn Nazis that they call people who aren’t Nazis, Nazis – just so they can condemn Nazis.

You’d never guess that leftists were big fans of Nazis when the Nazis and the Communists invaded Poland. The designated enemy of the people in 1940 was Great Britain, then fighting alone against a triumphant Third Reich.

You’d probably never believe that the only reason that leftists don’t like Nazis is because the Nazis invaded the Soviet Union.  Prior to that Nazis, leftists, and Communists were all best buds.

It’s not surprising, since Nazis aren’t the political opposite of Communists; they are just two movements on the Left of the political spectrum. Leftists pretend that Nazis and Communists are opposites so that they can make Communists look good.

Nazi stands for, in German, der Nationalsozialistische Deutsche Arbeiterpartei — the German National Socialist Workers Party. Both groups hate democracy and love big government ruled by the elites. While Communists say all men are equal the reality is that some are more equal than others.

To understand the small difference between the two ultimate big-government parties let’s go to a little old Lithuanian woman who had survived being conquered by both Nazis and Communists. She said that she preferred Nazis because if you did what they told you to do, they’d leave you alone, while Communists wanted you to think the way they thought; modern liberalism's roots are clearly found in Communism.

Leftists have always been enthralled with Communism because they believe that they, the leftists, are better than the rest of us and they should be running the show. That’s why leftists are completely comfortable with five Supreme Court justices throwing out the votes of 55,000,000 Americans.

If Leftists had their way the elites, i.e. themselves, would be in complete charge and telling us how much soda we can drink.

The fact that nonleftist people in the leftist/DC bubble don’t get upset about antifa is that they’ve been lied to about Communism, the first alt-left, for so long that they actually think that Nazis are worse than Communists.

The lying started during the 1920s, when the Soviet Union was portrayed by leftists as a wonderful place when the reality was that people were being killed by the millions.

During WWII, the U.S. made a deal with the Devil. We helped Stalin defeat Hitler. Now, defeating Hitler was very important. However, leftists used the fact that after splitting up Poland Hitler and Stalin had a falling out to restart the propaganda machine that taught that Communism wasn’t that bad. But even when the U.S. and USSR were “allies”, communists and leftists in America were working as spies — that’s how the Soviets got the Atom Bomb so quickly — or as agents of influence for Communism.

Unfortunately for them, after WWII, Stalin broke every treaty he’d signed, dropped every agreement, destroyed opposition parties in areas occupied by the Red Army, and made aggressive moves toward Western Europe. To the chagrin of Leftists, most American’s didn’t like that.

But the reality is that in the 1950s Americans were just too eager to enjoy the freedoms so many had suffered or died to defend that Communism couldn’t get any traction.

You’ve probably heard that the “Witch Hunt” was an evil abuse of power aimed at Communists who weren’t there. But that’s not true. There were Communists in the federal government, Hollywood, the unions, and elsewhere, people who didn’t like democracy and who wanted a strong man like Stalin running America. They used their positions to try and convince Americans that being enslaved to the government was a good thing.

Leftists in academia and the media — two job sets that don’t actually require either hard work or honesty — used their platform to constantly attack Nazis and compliment Communists.

To this very day they’ve continued. Nazis are always the bad guys — which is fine — but more often than not Communists are really wonderful people who have discovered the key to utopia and have only the best in mind for their countries and the world beyond. Hard to believe, given that every Communist state has had to build walls to keep its people in.

Clearly, condemning Nazis is fine because Nazis are scum. The problem is that the people in the DC bubble are 3rd generation; their grandparents never heard the truth about Communism.

The Bubble people, no matter what their proclaimed political position, know in their genes that Nazis are bad — which is a good thing because Nazis are bad.  Unfortunately, they also “know” that Communists are idealists who are much better than Republicans.

Interestingly, the left began to dislike Russia only after it rejected Communism. During the Reagan presidency, the left, the professors, and the press were blaming the U.S. for international tensions and making excuses for the Communists who were running Russia. (Such as Yuri Andropov, who butchered 30,000 Hungarians in 1956, but was acceptable thirty years later because he listened to swing and enjoyed Western Scotch.)

We’re seeing the effect of nearly a century of lying about Communists in the bizarre reactions of otherwise sane people about Charlottesville.

Because the Bubble people actually think that Antifa — the new communist shock corps — is fighting for freedom, not for their own right to be tyrants, Bubble people buy into the lie that Antifa is good, Nazis are bad.

The truth is that Antifa is bad and the Nazis are bad.  It’s time to start tearing down the façade liberals have built around the alt left — Communists and Antifa. Get your facts down and talk to your friends; it’s time to condemn all monsters, not just Nazis.

You can read more of tom’s rants at his blog, Conversations about the obvious and feel free to follow him on Twitter.

Mexico’s Cardinal Sandoval is right: The ‘new world order’ is a call to destroy the family
Vatican Cardinal: “A New World Order is Gaining Ground”
World Renowned Canadian Novelist Michael O’Brien Warns about Globalization and New World Order
Pope Who as Cardinal Urged Protest of UN’s “New World Order” Accepts Invite to UN
A Reflection on the Emerging New World Order by Michael D. O’Brien
Communism: What you don’t know is killing the unborn
Media Ignores President’s Commemoration of the Deaths of 100 Million Victims to Communism