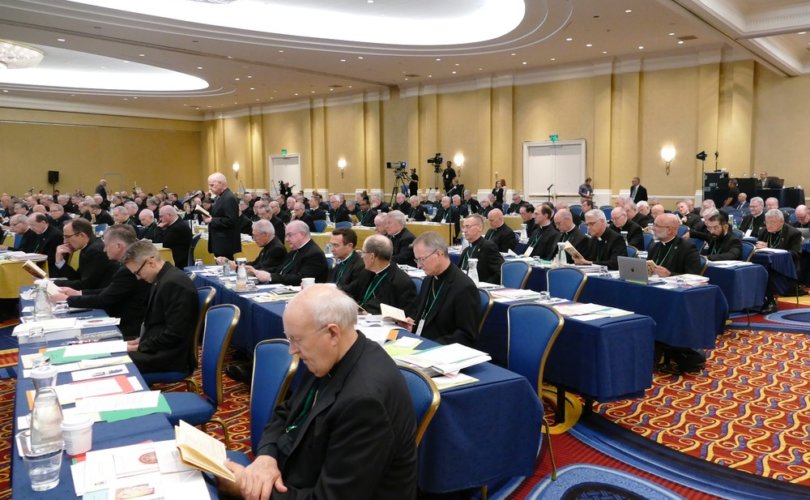 US bishops gather for their fall 2019 meetingLisa Bourne / LifeSiteNews

June 25, 2019 (LifeSiteNews) — The vast majority of U.S. bishops voted on June 13, 2019 to rewrite the United States Catholic Catechism for Adults to bring it into line with the novelty introduced by Francis into the Catechism of the Catholic Church. Pope Francis espouses the error that capital punishment is illegitimate in principle, a claim that can be true only if it is intrinsically immoral — which Francis has indicated he believes when he called it “per se contrary to the Gospel” (October 11, 2017) and “immoral” (May 10, 2019).

In this way, the U.S. bishops showed themselves a collective chameleon turning white from clinging so closely to the papal habit, rather than standing on their own feet as successors of the apostles, handing down the consistent teaching of the Church over the past two millennia.

A particular irony of the day of the vote has been lost on those who have commented thus far. The Novus Ordo Mass readings for June 13, as given by the USCCB on its website, included as the First Reading a passage from 2 Corinthians. The Lectionary tells us the source: 2 Cor. 3:15–4:1, 3–6. Note that little comma. The liturgical reform in the 1960s was careful to excise verse 2 of chapter 4 from the Lectionary. And guess what that skipped verse is. I will put it in boldface:

To this day, whenever Moses is read,
a veil lies over the hearts of the children of Israel,
but whenever a person turns to the Lord the veil is removed.

All of us, gazing with unveiled face on the glory of the Lord,
are being transformed into the same image from glory to glory,
as from the Lord who is the Spirit.

Therefore, since we have this ministry through the mercy shown us,
we are not discouraged.

Rather, we have renounced shameful, hidden things;
not acting deceitfully or falsifying the word of God,
but by the open declaration of the truth we commend ourselves
to everyone’s conscience in the sight of God.

And even though our Gospel is veiled,
it is veiled for those who are perishing,
in whose case the god of this age
has blinded the minds of the unbelievers,
so that they may not see the light of the Gospel
of the glory of Christ, who is the image of God.

For we do not preach ourselves but Jesus Christ as Lord,
and ourselves as your slaves for the sake of Jesus.

For God who said, Let light shine out of darkness,
has shone in our hearts to bring to light
the knowledge of the glory of God
on the face of Jesus Christ.

Another translation (RSV) of the missing verse reads: “We have renounced disgraceful, underhanded ways; we refuse to practice cunning or to tamper with God’s word, but by the open statement of the truth we would commend ourselves to every man’s conscience in the sight of God.”

As a friend who saw this lacuna wrote to me: “I’m in the market for an irony meter, because mine just broke.”

In a first layer of irony, we have a verse in which St. Paul protests that he will not act deceitfully or falsify God’s word, that he will not practice cunning or tamper with this word — and the liturgical reformers surgically remove it, as if to make a virtuosic display of their own willingness to do exactly what St. Paul would never dare to do. This, we know, is not the only time this sort of game is played in the new Lectionary (see here and here).

In a second layer of irony, we have the U.S. bishops voting to change the country’s national catechism to a position that contradicts the revealed Word of God — refusing, that is, to make an “open declaration of truth … in the sight of God.” This verse, which amounts to a promise before God not to falsify His revelation, was conveniently missing on the day when these bishops could not have made such a promise without committing perjury. The new and improved Lectionary in that sense ran interference for the new and improved Catechism. The veil over the hearts of the children of Israel that prevents them from grasping the meaning of the Law seems to be a veil that continues into the present for those who would reject the tradition of biblical interpretation on the death penalty that has been common to Catholics and even to most non-Catholic Christians. The “god of this age” — a god that wears many masks, including the European-style social liberalism so favored by Francis — “has blinded the minds of the unbelievers,” that is, of the believers who no longer believe as their forefathers did.

Bishop Robert Barron thinks he can get around the problem by saying this vote was not a vote on the death penalty as such, but merely on what the catechism should say at this time. Sorry, that won’t cut it. The catechism is supposed to teach us what is true according to the Faith. If it speaks in such a way as to lead most readers into thinking that the death penalty is intrinsically immoral, always unjust, then it has failed as a catechism and indeed has become a cause of separation from the Catholic Faith instead of communion in it.

As the “Appeal to the Cardinals of the Catholic Church,” signed by 75 clergy and scholars, said back on August 15, 2018, in words that ring out as truthfully today as they did last summer:

Since it is a truth contained in the Word of God, and taught by the ordinary and universal magisterium of the Catholic Church, that criminals may lawfully be put to death by the civil power when this is necessary to preserve just order in civil society, and since the present Roman pontiff has now more than once publicly manifested his refusal to teach this doctrine, and has rather brought great confusion upon the Church by seeming to contradict it, and by inserting into the Catechism of the Catholic Church a paragraph which will cause and is already causing many people, both believers and non-believers, to suppose that the Church considers, contrary to the Word of God, that capital punishment is intrinsically evil, we call upon Your Eminences to advise His Holiness that it is his duty to put an end to this scandal, to withdraw this paragraph from the Catechism, and to teach the word of God unadulterated; and we state our conviction that this is a duty seriously binding upon yourselves, before God and before the Church.