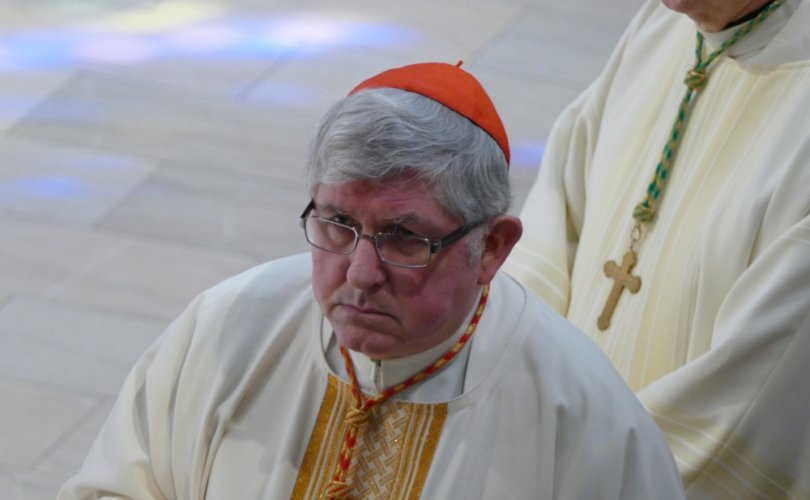 How Trustees disgraced themselves and betrayed their oath of office

Let's recap why the Cardinal penned this letter.

At a November 11th TCDSB meeting, Ward 9 Trustee Norm Di Pasquale blocked a Catholic delegate from reading paragraph 2357 of the Catechism of the Catholic Church, which expresses official teaching on homosexuality. The Trustee called it “dangerous”.

Trustee Martino followed up and described the words of the Catechism as “not proper” and warned the delegate about continuing to read the Church teaching.

Finally, Ward 5 Trustee Maria Rizzo piled on and described the recitation of the Catechism as “unacceptable”.

You can watch the shocking exchange on video by clicking here.

The special Board meeting had been called by Ward 2 Trustee Markus De Domenico in order to persecute his colleague, Trustee Michael Del Grande. The latter had tried to defend Catholic sexual teaching at a past board meeting by opposing a proposal for the TCDSB to embrace Transgender Ideology.

De Domenico and a cabal of other dissident trustees falsely characterized Del Grande's defence of Catholicism as a Code of Conduct violation because it was allegedly “hurtful” to “the LGBTQ community”.

The delegate who was interrupted in reciting the Catechism was speaking in defense of Del Grande at the time, and against a motion on the floor to find him “guilty” so that sanctions could be imposed upon him.

Ultimately, eight dissident trustees voted in favour of finding Del Grande guilty and imposed severe sanctions on the faithful Catholic. Trustee Del Grande will appeal the ruling and likely go to court to ask a judge to overturn the decision as an unlawful abuse of process. CLC believes he will win.

We're very happy that Cardinal Collins has finally ended his silence on the public heresy of the TCDSB trustees. His strongly-worded rebuke of these trustees was excellent, and we thank him for that.

However, it was not sufficient.

His Eminence has a moral and canon law responsibility to insist upon the resignation of the eight dissident trustees on the board who have brought Catholic education into disrepute, undermined and attacked the teachings of Our Lord and the Catechism.

Until the Cardinal does so, CLC is forced to repeats its request for Catholics in Toronto to continue withholding Sunday offerings. In case you are not aware, the Bishop’s office collects a tax on all Sunday donations which goes to the chancery coffers and which must be remitted by the parish priest.

The Cardinal Archbishop has the moral and legal authority to right this sinking ship that is the TCDSB. And because he has a love for souls, that’s what His Eminence will surely do. He must remove the wolves from amongst the sheep.

Catholics still have other means of fulfilling their obligation to provide for the financial needs of the Church while at the same time, withholding donations to the Cardinal Archbishop. Useful suggestions for doing so are described here and here.

What does Canon Law say about a Bishop's responsibility for schools in his diocese?

The Code of Canon Law, in sections 802 through 806, makes it abundantly clear that there is no other person on whose shoulders falls the ultimate responsibility of ensuring that Catholic school boards are authentically Catholic in their doctrine and teaching.

Canon Law lays out the rights and responsibilities of the local diocesan bishop, stating unambiguously that he is responsible for establishing schools “that are imbued with a Christian spirit” and which he, as the local ordinary, has the responsibility to “direct”. It's irrefutable that the TCDSB's “spirit” is now more secular than Christian. Hence the need for the diocesan Bishop to intervene.

We are not asking His Eminence to do anything above and beyond the call of duty. This is his job. Pure and simple.

These trustees are so clearly entrenched in their opposition to Catholic doctrine that no other remedy exists but to publicly ask for their immediate resignation.

The Cardinal should also warn, as part of his request for their resignation, that if they refuse to step down, he will bar the TCDSB from using the name “Catholic” on any of its schools or offices. This is his right under Canon Law section 803.3.

What secular, legal powers does Cardinal Collins have at his disposal?

Besides cleaning house on the Board of Trustees (or in addition), the Cardinal has the constitutional right to immediately expel from his school system all policies and curriculum which undermine Catholic teaching, and which have infiltrated Catholic schools over the past 20 years.

Every Catholic School Board in Ontario, and every local Bishop, has the power to invoke Section 93 of the Constitution Act of 1867 to reject any provincial law or regulation which adversely affect the content of faith and morals in Catholic denominational schools.

The Supreme Court of Canada has twice affirmed that the constitutional right of Catholics schools in Ontario is “absolute” in this regard, and is “immune” to a Charter challenge.

This constitutionally-protected right for Catholic schools in Ontario is explicitly acknowledged in section 19.1 of the Ontario Human Rights Code, and in section 230.19(1) of the Education Act itself.

Cardinal Collins does not even have to go to court. He simply has to announce to the Minister of Education that Catholic schools in Toronto will no longer accept curriculum, policies or directives that have been imposed by the Ontario government over the years, including the Ministry’s Code of Conduct requirement to include Gender Identity Theory and other anti-Christian terms.

Given the scandal of public heresy on parade at the TCDSB in recent times, we recommend to his Eminence that it is time to invoke Section 93, and undertake a sweeping reform to restore its heavily degraded Catholic character.

Those teachers, staff, students and parents who don't want a return to authentic Catholicism should be respectfully invited to leave for the public system where they can be more true to themselves.  The charade of pretending to be “Catholic” in order to more effectively undermine Church teaching from within, must finally come to an end.

If the Catholic education community shrinks as a result, so be it.  At least it will be faithful to God.

If you're a Catholic in Toronto, respectfully inform his Eminence that you will be withholding Sunday donations until such time as the Cardinal has publicly requested the resignation of the dissident trustees.

Please also contribute to Michael Del Grande's legal defense fund. We cannot allow his voice to be unlawfully silenced by this cabal of anti-Catholic trustees. He's going to court to defend himself, and we need to help him keep fighting for authentic Catholic teaching. Donate here.

Editor’s note: This article first appeared on Campaign Life Coalition here and has been reprinted by permission of the author.