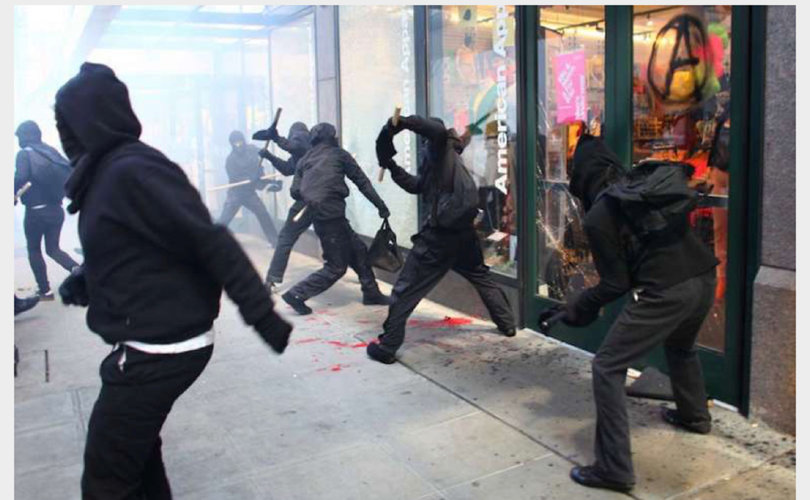 June 16, 2020 (LifeSiteNews) – Many of us who voted for Donald Trump in 2016 had serious misgivings about him as a person and a candidate. Yet it was either Trump or Hillary Clinton, so our vote for Trump was effectively a vote against Hillary.

Now, in 2020, the stakes are considerably higher. As expressed by George P. Bush, “Trump is the only thing standing between America and socialism.”

That’s why many voters will support Trump again, even if they are put off by some of his tweets and public statements. In their minds, it’s either Trump or Antifa, either Trump or chaos on our streets. In that light, the choice becomes simple.

In my new book, Evangelicals at the Crossroads: Will We Pass the Trump Test?, I lay out the evangelical case against Trump, explaining why many Christians could not vote for him in good conscience. For these evangelicals, our association with Trump has hurt our witness and damaged the cause of the gospel.

As expressed to me with great passion by an evangelical colleague (he voted Republican for years until Trump), “He has set back, no he has utterly destroyed the credibility of the evangelical world. Who respects evangelicals because of Donald Trump? NO ONE. Who feels more attracted to the gospel because of evangelical fealty to Donald Trump. NO ONE. Is this undeniable and massive good?”

This is all laid out in my book, detailing the case against Trump as clearly as I can. It is a powerful case, indeed.

But then I lay out the pro-Trump evangelical position, one which basically says, “We needed someone to stand up to a one-world government movement. To face down Iran and China. To fight against Islamic terrorism. To push back against extremist elements in our own country. To stand for our religious liberties. To fight for the lives of the unborn.

“So what if he makes stupid statements and sends out nasty tweets. We’re dealing with massive issues of national and global importance here, and Trump has been the man for the job.”

This is similar to the reasoning of Middle East expert Daniel Pipes, who penned a June 4 editorial titled “A Reluctant but Unhesitating Vote for Donald Trump.”

He first listed his Never Trump bona fides, which were impressive indeed: “I watched in dismay as I helped the Ted Cruz presidential campaign, seeing Republican primary voters select Donald Trump out of a field of 16 viable candidates and make him president-elect. I signed an open letter committing to ‘working energetically to prevent the election of someone so utterly unfitted’ to the presidency and wrote many articles lambasting Trump. I left the Republican Party on his nomination and voted for Libertarian Gary Johnson in the general election. After the election, I hoped for Trump's impeachment and President Mike Pence.”

Yet now he will be voting for Trump, encouraging others to do the same. As he explains, “Nearly four years later, Trump's character still troubles and repels me. If anything, his egotism, disloyalty, and bombast exceed those vices when he was a mere candidate.

“But,” he continues, “to my unending surprise, he has governed as a resolute conservative.”

And so, “Slowly but inexorably over the past three years, my approval of the policies has outbalanced my distaste for the person. Finally, knowing that Joe Biden will represent the radicalized Democrats in November, I conclude that I will do my small part to help Trump get re-elected by writing, giving, and voting.”

Today, as we see just how radicalized the Democrats have become, with “defund the police” becoming the latest mantra, we understand how high the stakes have become.

I personally know Christians who voted for Trump in 2016 but told me they were not going to vote for him again. (They did not plan to vote for Biden either, so they would sit out the presidential elections or cast a third party protest vote.)

They were too repulsed by his character and felt that he often made a mess of things with his words. And, as much as they appreciated the good that he did, they felt that the damage to the nation outweighed his positive contributions. He was too divisive. Too destructive. He degraded us more than he helped us. Because of that, they would not vote for him in 2020.

Now, as our cities are on fire and angry mobs stand ready to cancel our freedoms and demand conformity, these same voters are confronted with a stark reality. In short, it could well be that Donald Trump is the last line of defense against a radical, leftist takeover of our government, the likes of which we have never seen.

This will push many a reluctant voter, like Daniel Pipes, firmly into the Trump column.

It could be as simple as that.

(For the question of how evangelical Christians can vote for Trump without destroying their personal witness, see my 10-point strategy in Evangelicals at the Crossroads.)